Your Grandfather's Abercrombie & Fitch Would Be a Hit Today

The vintage version of Abercrombie, bristling with Orvis fishing rods and swaddled in down and tweed, would arguably be far more successful in today’s market than the current version.

NEW YORK, United States — Abercrombie & Fitch needs a plan. It needs to reinvent itself. It needs fewer logos and abs. It needs new styles, female shoppers, and brighter stores. This is the narrative that has followed the struggling retailer since it began a protracted swoon in the spring of 2007.

Whether Abercrombie & Fitch can turn things around is debatable, but a time machine would certainly help. It is difficult to overstate what an empire the retailer was 50 to 100 years ago. At the company’s 12-story flagship on Madison Ave., one could take a fly-fishing lesson, get fitted for a polar expedition, have a dog groomed, and buy a bocce set, all before it was time for a sundowner and some oysters Rockefeller.

Not only was the company hugely successful in the first half of the 20th century, but that version of Abercrombie — the vintage retailer bristling with Orvis fishing rods and swaddled in down and tweed — would arguably be far more successful in today’s market than the current version.

For one, it was a so-called lifestyle brand when Martha Stewart was still a toddler playing house. Its products were all gateways to an experience, tailor-made to trigger the slightly deeper emotions that brand loyalty is built on. Its stores were full of sailboats and cars, and its catalogs were full of funny cartoons and original commissioned artwork. In a 1923 ad, the company called itself the "city center of this open-air world." In short, Abercrombie & Fitch was far more than just a place to buy stuff.

Secondly, vintage Abercrombie had a lock on the urban outdoorsman, a style and type of consumer that accounts for a sizable share of today’s menswear market. You’ve seen these guys and, occasionally, girls. They winter in Fair Isle sweaters, and they summer in waffle-knits. The Red Wing boots seldom come off, and don't get them started on bourbon, Persol sunglasses, or selvedge denim. The most ardent among them blog at length about "heritage" and "authenticity" and Steve McQueen or advise companies on how to do so.

In an entirely unscientific exercise in aesthetics, we bought a couple of old Abercrombie catalogs — one from 1949 and one from 1964 — to see how the SKUs stack up. What we found was page upon page of gear and apparel that would fly off the shelves of a Brooklyn boutique these days (apart from all the guns and ammo, of course).

The sheer amount of bric-a-brac was captivating. A mosquito-net hat fitted for a pipe? Check. A traveling martini satchel? You bet. Double-decker camping cots? Affirmative. This was a retailer focused on a brand and a style, not a "vertical." If it was fun and outdoorsy, Abercrombie carried it. It had a line of axes and archery gear that would put today's Best Made Co. to shame. There was a device that launched empty (and possibly full) beer cans like clay pigeons, something called "water skates," an inflatable boat, and a range of tiny outboard motors for that boat that seem impossibly affordable.

And then there was the apparel and footwear — a closet full of classic styles that still sell briskly today, just not at Abercrombie & Fitch. 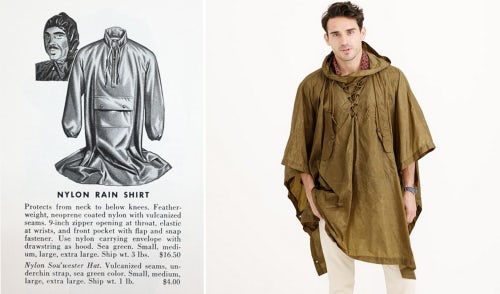 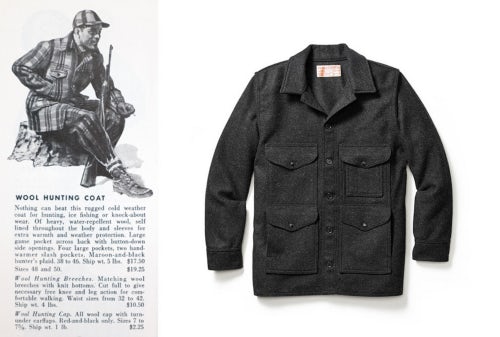 And a rustic, strapped backpack is on offer for $695 at Billy Reid, a Florence (Ala.) design shop favoured by the GQ set. 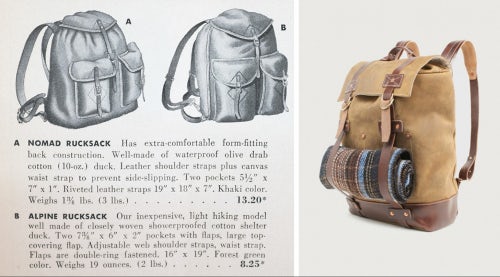 To be sure, Abercrombie is trying to get some of its Americana back. It is changing the "scent" and lighting levels of its stores. It has a partnership with Woolrich, which makes enough fuzzy plaid to outfit 1990s Seattle (and 1890s Seattle, for that matter). It is even back in the axe game, in a way.

The company is, however, still selling a pair of bro-pajamas called the varsity onesy ($41), as well as a cologne named Fierce (and that's "fierce" in the hairless Adonis sense, not the Jeremiah Johnson sense).

At the very least, maybe Abercrombie still has a storage room stacked with old catalogs. If prices on EBay and Etsy are any measure, those things are more coveted than any of its clothes at the moment.