The German sportswear brand unveiled its latest Consortium collaboration as it continues to explore the potential of digital light synthesis 3D printing technology.

The first of the crowd had arrived at 10am. As with the previous Consortium launches that lead up to the event — collaborations with Sneakersnstuff and Invincible — runs on the shoes are extremely limited. Only five pairs were seeded globally pre-launch — four to undisclosed media partners and one to an internal employee. With the release limited to just 150 pairs retailing at £400, a number of the crowd planned to sleep outside of the pop-up store.

"Consumers are educated and invested. They want the best product, but they are also interested in the narrative behind this product whether that’s the partner, the innovation or the creative. With this activation we have been able to bring performance technology into a lifestyle context," says Daniel Bauer, Adidas' senior director of statement product. 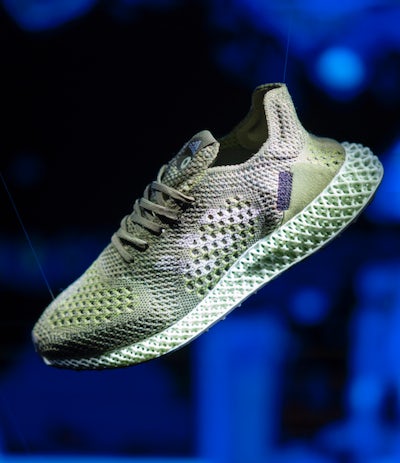 Sam Hodgkinson of Footpatrol told BoF, "We drew inspiration from the theory of colour harmony and designed the knitted material on the upper part of the shoe with several hues of green entwined into one, instead of one solid colour. This is a classic Footpatrol colour palette."

"Prior to Sneakersnstuff, no retail partner of any kind had collaborated on 4D — so choosing the right partners was crucial. We looked for the perfect balance of retailer, city and timing — in this case, London Design Festival — to make sense of how we decided. Consortium is built on a network of influential retailers that we have a huge respect for. Sneakersnstuff, Invincible, Footpatrol and Kith [who will launch a Consortium collaboration in the future] work closely with our in-house design and product teams to push us to do things from a creation perspective that we hadn't been able to do previously," Bauer adds.

"To have experts in their field input on those aspects of our brand — creating something that without one another we couldn’t — is really exciting for Adidas. As with any new technology there's a test phase and we're currently exploring the technology outside of this silhouette to see where we can take this too by experimenting with archive and future partners," he continues.

Adidas launched its Consortium 4D concept in April last year. The product was the first to use digital light synthesis technology to create the sneaker’s mid-sole. The technology, pioneered by Silicon Valley-based tech company Carbon, combines light with programmable liquid resins to create a lattice pattern. In each Consortium 4D shoe, the midsole is made of over 20,000 struts, designed to maximise control of energy for the wearer.

During the 48-hour exhibition, the product will be staged within a large-scale light installation by visual artist Ben Cullen Williams, who has worked with Adidas on projects for Y-3 and Prophene. Cullen Williams, who has also collaborated with Calvin Klein, told BoF, "New technology can be slightly inaccessible on an emotive level. Art can communicate and discuss qualities that new technology has but might not be explicit. I was interested in drawing parallels between this technology and membranes and cells. The material is digitally made but has the end result in a physical form." 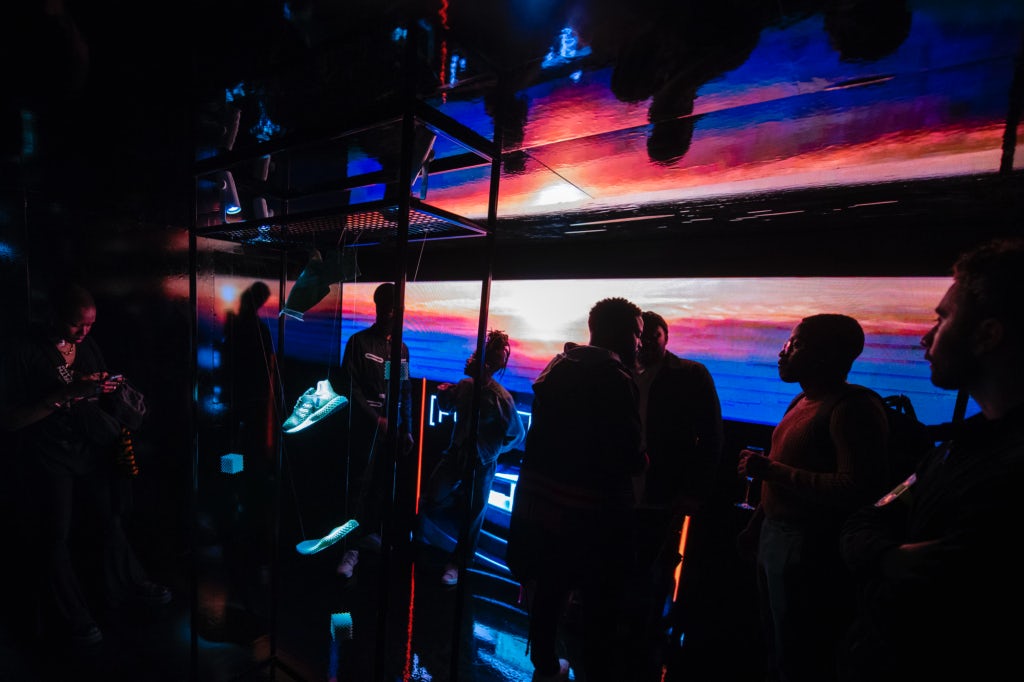 Thanks to the digital light synthesis technology, Adidas has also seen a significant reduction in waste during performance testing. The design process of the mid-sole enables the company to almost entirely eradicate prototyping and reduces the time it takes to print a sole from an hour and a half to just 20 minutes per sole, arguably making 3D printing at scale viable in the future. Adidas has previously compared the commercial potential of its Consortium 4D design to that of its Boost line. First released back in 2013, Adidas produced 100,000 pairs to launch the Boost. In 2017, it produced over 50 million pairs.

Back in August 2018, Adidas AG posted second-quarter revenue and profit that beat analyst expectations. Revenue adjusted for currency swings rose 10 percent to 5.26 billion euros ($6.1 billion), driven by a 12 percent gain at its namesake shoe brand according to statistics shared by the German brand. Adidas shares are down 1.5 percent in the past year, compared with gains of more than 15 percent at Puma and 34 percent for Nike Inc.

The 3D printing industry is predicted to more than quadruple sales to $26 billion by 2022, according to Wohlers Associates, a US consultancy specialising in 3D printing.