Two years after launching handbags, the cult fragrance brand is dipping a toe into apparel and footwear with Byproduct, a capsule collection of made-to-measure suits and basketball-inspired sneakers.

PARIS, France — As luxury’s biggest brands prepare to showcase their latest menswear collections, an unexpected name is adding the final touches to its latest apparel offering. Cult fragrance brand Byredo, best known for its niche high-end scents, will showcase its first collection of made-to-order suits and leather sneakers in a collection dubbed Byproduct.

The 10-piece capsule suit collection has been designed by founder Ben Gorham, and will be made-to-order by Stockholm-based heritage tailor A.W.Bauer & Co. Sneakers will hit stores in September, and the suit collection will be available to order in Autumn. 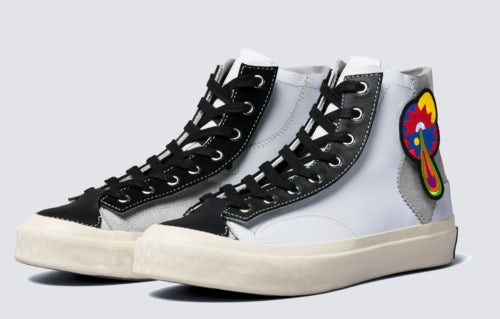 The fashion week presentation will recreate an NBA draft ceremony at a Parisian school gym — a reference to Gorham’s former career as a basketball player.

“Byredo is a by-product of a failed basketball career, and there’s a very emotional component to it that has to do with [picking] yourself up,” said Gorham. “Narrative has been quite important in developing the brand and also the products. I was a basketball player most of my life, and I made this 180 into becoming a creative and an entrepreneur… this project is very much about bridging those two worlds.”

Byproduct is the latest example of Byredo’s segue into fashion-focused products. After launching in 2006, the brand quickly branched out into body care and other fragrance-adjacent accessories such as candles and leather travel perfume cases. In 2017 it launched a permanent handbag line, the first time the brand had operated outside the beauty space in a significant way.

While Gorham spearheaded the design of the bag line, the company recruited talent to help with the production and quality control. Bags were priced between $1,000 and $3,200, launching with established retail partners including Selfridges in London and Barneys in New York.

We’ve gotten to that point where we have a booming strong business that allows us to invest in the narrative.

Despite the new hires, it was a challenging launch, said Gorham. “I may have underestimated the amount of people that are willing to, without enough context, step away from the big brands like Chanel and Dior and Hermès, and invest in a beautiful handbag,” he said.

After a year of trial and error, the brand scaled back distribution of the line — bags are now only available to purchase at one of Byredo’s five outposts, along with very select retailers — and doubled down on the storytelling of the collection. It was after these adjustments that the bag line really began to take off, he said.

“I’ve chosen to position it as a very precious part of what we do,” said Gorham. “I felt scarcity within that market was quite rare.”

Now that its handbag line is becoming a more robust part of the business, Byredo is adding more accessories to its offering. While Gorham says Byproduct’s suits and sneakers are intended to be one-off categories, a permanent eyewear line will launch next month. Jewellery is slated to debut during Paris Couture Fashion Week.

“A large part of the Byredo DNA is telling stories,” said Gorham, who declined to share revenue figures for the business. “I spent many years building a platform and a business to be able to express these ideas more, in a very clear way. We’ve gotten to that point where we have a booming strong business that allows us to invest in the narrative — and in different mediums.”

In 2013, Manzanita Capital acquired a majority stake in Byredo. Today the brand is available in 50 markets around the globe, and has flagship stores in Stockholm, London, Paris, New York and Seoul. Another international flagship is expected to open later this year.