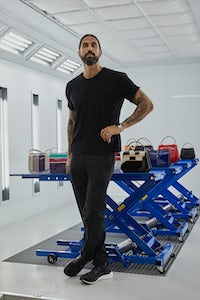 LONDON, United Kingdom — Swedish fragrance brand Byredo is opening its first UK outpost in Soho, London, where the cult line will sit alongside Alex Eagle, A.P.C. and Aesop. The store, which is slated to open in June, marks the label's second venture outside of the US — its first New York flagship launched in June 2015 and it already has a store in Sweden. The London shop will take over a three-storey townhouse where it will display its offering of fragrances, beauty, leather goods and collaborative projects presented in a new gallery space, featuring work from different artists, and future collaborations.

"London was one of our first markets and it's also one of our biggest markets," says Byredo founder Ben Gorham. "As we expanded into multiple categories — our business is primarily wholesale through department stores — having our own retail extension has become a way for people to experience the Byredo universe in one place. "

Byredo is a unique success story. Founded by Gorham — a former basketball star and art school graduate with no formal training as a perfumer — in 2006, the brand rose to acclaim through its alternative take on fragrance (Gorham is fond of referring to his frangrances as "stories" as opposed to "scents"). At a time when many luxury houses found commercial success through glossy celebrity advertising and floral scents, Byredo was part of a wave of niche, high-end fragrance brands, including Frédéric Malle, Diptyque and Le Labo that offered more unique scents to the saturated £39 billion global fragrance market.

"The biggest problem in the fragrance market was that everything smelled and looked the same," says Gorham, whose perfumes are created around personal memories of travel. Best-sellers include Bal D'Afrique, inspired by Paris and its infatuation with African culture, music and art. Another, named Blanche, celebrates classic beauty with hints of white rose, violet and sandalwood.

Since its launch, Byredo — owned by Manzanita Capital, which purchased a majority share in the business in 2013 — has rapidly expanded into 50 markets around the world and currently counts 80 stockists globally, of which 12 are in the UK. Over the past five years, the brand has added beauty to its offering. In September 2017, it debuted a line of luxury leather goods, including handbags, wallets and cardholders.

Byredo's London store will give the brand increased exposure in the UK, where revenue has grown double-digits each year since 2013. "Our vision will continue in the coming years with additional stores and retail exposure globally… Then within the categories you'll also see an evolution like in the beauty category where we're working on the idea of colour and skincare," says Gorham "I hope to be able to surprise people as we move forward."