Calvin Klein chief creative officer Raf Simons told BoF that the idea was to create a physical experience that represented a deep connection to his collections.

NEW YORK, United States — Raf Simons and artist Sterling Ruby have been collaborating for over a decade, from fabrics at Dior in 2012, to a partnership with Simons' own label in 2014 and most recently on the Calvin Klein headquarters at 205 West 39th Street. Now Ruby has put his stamp on Calvin Klein's new Madison Avenue flagship.

The three-floor store, which was originally designed by architect John Pawson and reopened Saturday, has been given a complete makeover by Ruby: a bright yellow space is filled with scaffolding, with Ruby's now-familiar fringing and American flag-inspired textiles hanging from the ceiling.

The installation is unveiled as Simons' 205W39NYC Autumn/Winter 2017 collection makes its debut in store, a new home for the marching band uniforms, quilting, denim and western wear that appeared on the runway at New York Fashion Week in February. 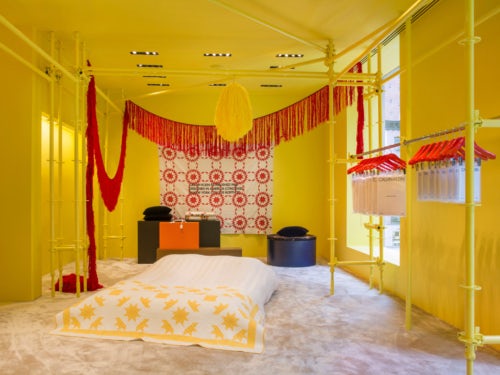 The installation reflects its impermanence — it is temporary, and precedes a full renovation of the building.

“I wanted the store to generate a very immediate physical experience that could as well be intimately connected to the collections,” Simons tells BoF. “It is also a continuation of the language I am creating with Sterling for Calvin Klein’s visible and physical identity. The use of very direct and familiar references common to the American visual experience creates a simple and emotional connection with the brand.”

“I’m taking the Calvin Klein flagship store from minimal to maximal; my design should be seen as a marker to celebrate the future of the brand,” adds Ruby. “I wanted the store to glow from within, representing a new day for Calvin Klein.”

The store will also stock a collection of objects for the home, displayed in the context of Ruby's celebration of the American bed. Vintage quilts, Homer Laughlin coffee mugs and Rose Cabat's ceramic "Feelies" will be sold alongside Calvin Klein bedding.

Simons took over as chief creative officer at PVH-owned Calvin Klein in 2016, and his collections so far have been a hit with both editors and buyers — the number of retailers set to stock the line increased tenfold following the debut of his first collection in February.