Citizens of Humanity Reclaims Independence in Break From Investors

The premium denim label is implementing a creative restructuring as management buys back the company from its founder and private equity firm.

LOS ANGELES, United States — Premium denim label Citizens of Humanity has bought back the company from its investors Berkshire Partners and Jerome Dahan, its co-founder and chief executive.

The decision to end the partnership was made by Berkshire Partners, a Boston-based private equity firm with more than $16 billion in capital commitments. While Citizens of Humanity declined to disclose specifics of the transaction, sources indicate that it bought back Berkshire Partners’ 40 percent stake in the company, acquired in 2006 for an estimated $250 million including debt. Funds for the buyout were raised between private investors and the management team. The company also acquired co-founder Jerome Dahan’s remaining stake. He will stay on as a consultant to the brand and will turn his day-to-day attention to his new denim venture, Jean Atelier.

The company said it considered selling altogether or seeking an alternative investor. “[However], when we then thought about the best long-term structure for us, it was important that we maintained a private ownership structure without any specific requirements for excessive growth,” Amy Williams, chief executive of Citizens of Humanity, tells BoF. “The impetus was really Berkshire. Based on the lifecycle of private equity partners, for them it was time to move into other things. We ultimately felt that the brands, our accounts, customers and the team at the company would be best served, in the long term, with the management-led buyout. The company’s business and brand equity is growing nicely during difficult times and we have done so with a very thoughtful and disciplined approach.”

Berkshire’s break comes 11 years after the initial investment. “Most private equity firms’ investment horizon is typically five to seven years,” says Douglas Hand, a New York-based fashion lawyer. “[When a private equity firm wants out] its exit options are that the company goes public, or the company is sold to some third party. Or, as in this case, the management buys it back. Usually the two more lucrative deals are the former two, especially if the company goes public — it means it is doing so well there is a public appetite to own equity in the company which gives it a much higher valuation. [As the management reacquired it], it must have been the case that there was no deal in the offering… the management buyout was potentially the only option for the private equity firm.” 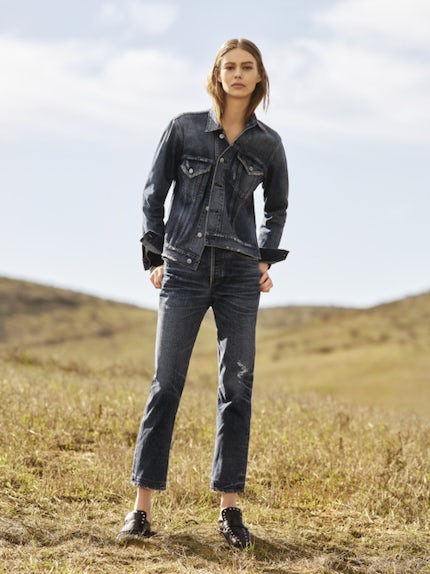 The 2006 investment allowed Citizens of Humanity to expand its portfolio of denim brands to include Getting Back to Square One, Agolde and Goldsign. In 2015, the company also acquired Japanese denim label Fabric Brand & Co.

Under the new plans, each of the brands will be managed by the parent label, with Williams operating as chief executive of the portfolio. “We will continue to think about growing the portfolio brands very thoughtfully and to the best of each brand’s potential without any sort of excessive pressure,” says Williams.

Karen Phelps — who has worked for a roster of global brands including Calvin Klein, Levi’s and Gap — has been named creative director of the group, replacing current creative director Catherine Ryu. Phelps will oversee the design direction of all five brands. Phelps is already a stalwart within the Citizens of Humanity portfolio: she was previously creative director of both Goldsign and Agolde, where under her direction the latter brand doubled its sales year-to-date. “My objective is to continue and evolve all brands.” Phelps tells BoF. “We have five brands under our umbrella, so it’s an incredible opportunity to be spread across all of them.”

Logistically, it makes sense for Phelps to oversee the entire portfolio: Citizens of Humanity is one of the few denim brands with vertically integrated production facilities. “We design, develop and manufacture in LA, so it’s hands-on with the product, which will be critical for my role. It’s important that I will be touching the product every day; it's easier to control,” says Phelps.

But the appointment across all brands is also part of a new growth strategy.  “Having one person who can think about each of the brands uniquely is really important and part of our future,” says Williams. “Karen completely reimagined Goldsign; she took a brand that had been somewhat dormant and reimagined it in the luxury sector. We feel it’s the next step for Citizens. We’ve had really nice growth, but it’s ready for the next step forward.”

Williams’ focus is to amplify the growth potential for each of the five brands within the portfolio. “The brands that we have now are all very uniquely positioned, with their own opportunities for growth,” says Williams. “We are not looking for any additional brands, and we will continue to think about growing the portfolio brands very thoughtfully, and to the best of each brand’s potential without any sort of excessive pressure."

Amid an oversaturated denim market, Citizens of Humanity shifted its stock from department stores to specialty boutiques including 10 Corso Como and Club Monaco, and tightened inventory, selling less than 1 percent of its stock in off-price channels. The company's portfolio is set to reach $100 million in revenue in 2017 — reportedly the same figure Citizens of Humanity generated in sales in 2005 at the point of Berkshire’s investment — when it was only one brand. Nevertheless, the company is back on the up: this year, it is set to post 10 percent year-on-year growth.

For Williams, the company's new independence signals opportunity: “We have a portfolio of five brands that are all appropriately distributed in the channels that they serve well," she says. "From there, they will continue to remain extremely profitable."

Reports of the Skinny Jean's Death Have Been Greatly Exaggerated