Givenchy's latest ad campaign offers a few clues on how the brand’s first female artistic director plans to make a statement of her own.

PARIS, France —  For many, Clare Waight Keller’s first collection for Givenchy — which she debuted in October, five months after taking up the post, with a mixed-gender show in the grand halls of Paris’ Palais de Justice — offered more questions than answers. Critics warmed to the way she embraced the codes set by founder Hubert de Givenchy, but were equally eager to see how she would imprint them with a statement of her own.

Her first full-blown campaign for the brand provides a few clues. Mirrors, both shattered in shards and atop pristine tables, play a prominent role in Givenchy’s Spring 2018 advertising. Also notable are men and women presented in mirror-image pairs, a reflection of Waight Keller's integrated approach. “There’s this sense of a different reflection of the couple… and for me the mirrors then become something that is destroyed and crushed and break that image of the past in a way, bringing something that’s more reflective,” the designer explained, talking through the campaign. 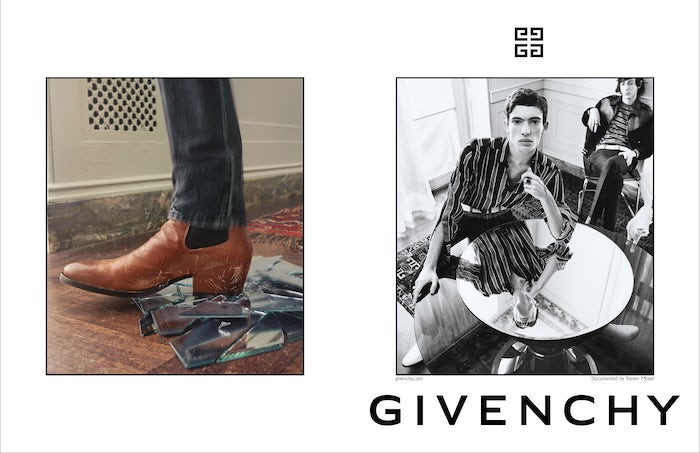 The campaign was photographed by Steven Meisel in a private mansion in upstate New York — “a place you find on Airbnb” for a “slightly destructive weekend,” said Waight Keller — but the designer didn’t shy away from putting key product center-stage. Accessories get prime, full-colour treatment alongside black-and-white portraits of models in the brand’s ready-to-wear. “I wanted to convey and attitude in the image of the boot,” she explained. “The fact that you’re powerful in them… They are really a cool easy boot that you can fuss around in. And the idea of the jewellery being very strong — being personal and defining — was something that I really wanted to focus on.

Givenchy owner LVMH may well be keen to push accessories as well, as it aims to boost Givenchy’s business under Waight Keller’s new creative leadership. But the designer says her approach is less strategic.

“The first outing, for me, I really felt that it was an exploration of my first thoughts coming into the brand,” says the designer. “Things became commercial out of it, but I certainly didn’t intend it from the beginning. But it’s definitely something that has informed my work in the past. That’s part of being a designer — the balance of everything.”