“Our twin goals for the Hodinkee Magazine are to offer something new to our longtime readers and to introduce new people to the Hodinkee lifestyle,” Stephen Pulvirent, managing editor of Hodinkee, tells BoF. “If you’re a die-hard watch collector, there are classic Hodinkee stories... If you’re someone who doesn’t typically read about watches, but you’re interested in things like cars, fashion, architecture, etc., the Hodinkee Magazine could serve as an introduction that speaks to you in language you understand and with a perspective that resonates. ”

Since its launch in 2008, Hodinkee has been something of an industry trailblazer: initially conceived as a blog covering the watch industry with a mix of news and in-depth features, it launched at a time when“the entire watch industry seemed almost afraid of the internet," says Pulvirent. Today, investors include John Mayer, Ashton Kutcher and Google Ventures. In 2012, it added an e-commerce platform in order to amplify commercial opportunities, and the site now collaborates on limited edition pieces with brands such as Vacheron Constantin and TAG Heuer. Hodinkee reported year-on-year growth of 60 percent last year, with 75 percent year-to-date growth for 2017. 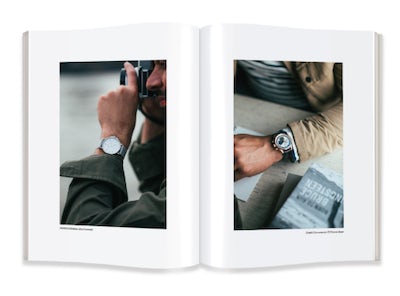 Hodinkee will skip newsstand distribution, and instead focus on select global retailers and hospitality partners including Soho House and Intercontinental Hotels, as well as making the magazine available on its own website.

The aesthetic lends itself to a “soft cover coffee table book," says Pulvirent — with a minimalist design akin to that of the website. “While everyday print magazines might be on their way out, we still believe that premium print products are more relevant than ever,” says Pulvirent.

The magazine launches at the tail end of a long slump for the watch industry. The Swiss watch market, which includes brands owned by Richemont and LVMH, has steadily declined for the past three years with exports falling 14.1 percent in July 2016. However in August premium watch exports climbed for a fourth consecutive month.

“We don't really think of the Hodinkee Magazine as something that fits within the confines of the watch industry. This is a more general interest men's lifestyle magazine that is inspired by a type of person who we know to be interested in watches.”