Inspired by stories of streetwear and subculture, the two generations of London design talent are releasing 12 limited edition pieces for Thames by Stephen Webster. 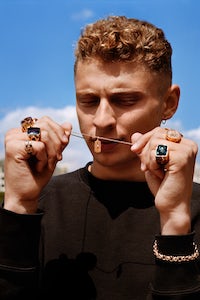 Inspired by stories of streetwear and subculture, the two generations of London design talent are releasing 12 limited edition pieces for Thames by Stephen Webster.

The pair met five years ago, when Webster spotted McCoy at one of his events. “That very first conversation that Blondey and I had was literally because I saw a young guy wearing a lot of jewellery. Obviously I thought that was cool, and I wanted to find out more about it,” Webster tells BoF.

Despite appearances, Webster — who is also chairman of the House of Garrard — found he had something in common with McCoy. “I was born on the Thames, and Blondey studied by the Thames, which was surely the reason for him choosing that [brand] name,” says Webster. “The river both divides and unifies the city. I think we have both built a connection with it and extracted what we can out of it to build a story.”

The pair also discovered parallels between the work McCoy is creating with Thames London now, and streetwear in the 1970s, when Webster was entering art school. “In my very early days, the street scene was punk. It was Vivienne Westwood, the Sex Pistols and the Clash, and that was about as disruptive as anything could be at the time.” says Webster. “When Blondey and I sat down and started chatting, he loved those stories, and they were the things that we thought could come forward with a little reinvention. What could that look like in 2017?”

The Thames by Stephen Webster collection will be priced between £350 ($450) and £8,000 ($10,400). But for McCoy, who collaborates regularly with other brands, a partnership must run deeper than a mutual desire for profit. “A lot of collaborations between brands are quite thinly veiled money making schemes, whacking two logos on one item just seems to double it's value,” says McCoy. “But really, Thames by Stephen Webster is a breath of fresh air, because it’s a product that Thames certainly couldn’t have created on its own.”

That said, McCoy is wise to the spending power of streetwear enthusiasts. “The majority of streetwear is printed tees and jersey, and people spend the same amount of money on these items as you would on a piece of jewellery,” says McCoy. “It seems the case that for any item, the less mass produced it is the more worth having it is. I think that's a mindset a prospective customer could apply to a limited jewellery collection, provided they think the product is as beautiful as I do!”

For Webster, the partnership is a gateway to a younger market. “This is absolutely how we can remain relevant and talk to a crowd that would be difficult for me to talk to on my own,” he says. “My collaborative partner talks brilliantly to his generation, so it’s about doing something that is fresh and exciting.”