The new SoHo boutique comes a little over a year after the brand split from US partner Want Les Essentiels and shuttered its two New York stores. 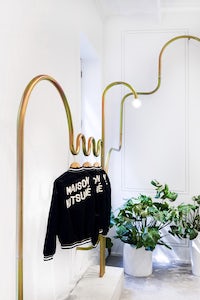 The new SoHo boutique comes a little over a year after the brand split from US partner Want Les Essentiels and shuttered its two New York stores.

NEW YORK, United States — Maison Kitsuné, the Paris-based fashion brand and music label is opening a new flagship in New York, a little over a year after splitting from Want Les Essentiels, its partner on its American operations.

While focused on the ready-to-wear collection, the Lafayette Street store, which opens Thursday, will also play host to experiential after-hours soirées. The brand will continue to organise events such as the Kitsuné Club Night, Kitsuné Showcase and Kitsuné Afterwork series across the US.

“I think the new location in Lafayette came very naturally,” says Gildas Loaëc, the former manager of Daft Punk who co-founded Maison Kitsuné with architect Masaya Kuroki in 2002. "We are very excited to be operating in American territory ourselves, and introduce the ‘little world’ we’ve been building, that lifestyle and art de vivre, and making it global."

Of course, this is not the first time that Maison Kitsuné has had a brick-and-mortar presence in New York. With Want Les Essentiels, it opened two outposts in 2015; a franchise boutique in the NoMad hotel, and a store on the Lower East Side. But as the brand's following grew, its founders say they felt an increased desire for independence. “At some point, we put ourselves in a position and in a capacity to operate in the American territory alone,” says Loaëc. “We grew, and wanted control of the brand ourselves.”

Splitting from Want Les Essentiels meant the closure of both New York outposts. “We had a little bit of a time out from the [US] market after the store in the NoMad hotel closed in December 2016, so we needed some to reset after that,” says Loaëc. It was funding from a minority investor, Stripe International, whose portfolio includes Thom Browne, that allowed Maison Kitsuné to relaunch in the US afresh.

Despite its hiatus from the American market, Maison Kitsuné has enjoyed global year-on-year revenue growth of 25 percent over the past year, while e-commerce revenue has increased by 40 percent.

Currently, 80 percent of revenue is generated outside of its native France, with Japan, the US and South Korea as the main drivers of growth. It is distributed through approximately 300 international dealers and nine directly owned boutiques.

While the US market is the company's current priority, it has planned further expansion into Southeast Asia —with a Kyoto store to open in October 2017.

Loaëc attributes the brand's steady growth to its all-encompassing lifestyle approach that comprises a clothing brand, a music label, events and a coffee shop in Paris. “It’s something we have been doing very naturally since day one of the brand, for 15 years, and we have a strong community of fans from the music side, events and fashion,” says Loaëc. “We’re not investing money in marketing, because our brand and that art de vivre gives us the chance to grow organically.”

How Kitsuné Cultivated a Loyal Fashion Fanbase Through Music