The celebrated photographer’s interpretation of sustainability for the magazine’s 10th anniversary issue also marks his return to his native India.

MUMBAI, India — GQ India is celebrating its 10th anniversary through an issue focused on sustainability, with the colour green running throughout all photography and editorials, as well as its five covers and a 14-page spread by celebrated photographer Max Vadukul.

For Vadukul, who is known for his black-and-white art reportage and portraits, the shoot represents a significant departure from his usual style, having worked as a staff photographer for The New Yorker, shot for the likes of The New York Times and various international editions of Vogue and photographed figures including Mother Theresa and Kanye West.

“There are so many pictures out there [about climate change],” said Vadukul. “I decided to revert back to trusting my instinct and going with my point of view, irrespective of what everyone would think. I wanted to have impact, rather than take a nice picture.” 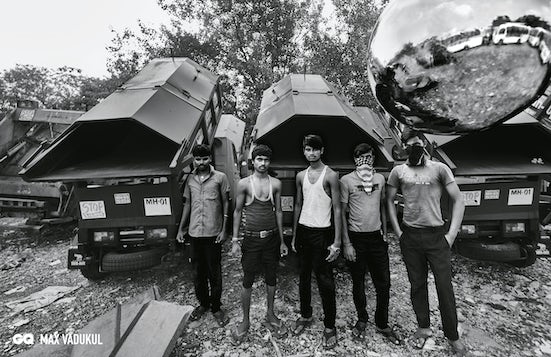 The 14-page spread, titled “Witness,” reminiscent of the photographer’s early work for Yohji Yamamoto, is centred around a cosmic orb, which the photographer calls a “cosmic judge,” hovering around toxic environments in Mumbai. Vadukul takes the reader through the city’s landfills, coastlines and markets, lending his eye to create a stark documentary-style shoot.

“What Max is renowned for is his fashion photography and his work for great fashion titles in the late '80s and '90s,” said Che Kurrien, editor-in-chief of GQ India. “This is a fine art project and has little to do with people, more to do with the concept and the broader issue of our time. The images [are] a departure creatively from what he’s known for.”

The issue was a personal turn for the photographer, who was born Mradukant Shantilal Vadukul in Kenya, to Indian and Kenyan-born parents. “I still speak my language, I’m a Gujarati boy, but I have been masquerading myself as Max since 1969,” he said. “That name doesn’t get you through the door.” Citing prejudices at school and later as a photographer, Vadukul remained as “Max” and rarely disclosed his Indian heritage until Kurrien commissioned him for GQ India.

“It’s nice to be welcomed back,” he said, explaining that his younger brother encouraged him to return to the country prior to death in March. Vadukul, whose work for GQ India with Kurrien’s carte blanche marks his newfound focus on sustainability, aims to continue the “Witness” project throughout the world.