In today's News Bites, Raf Simons gets meta with his new Calvin Klein campaign, while sources say Farfetch could go public within the next six months. 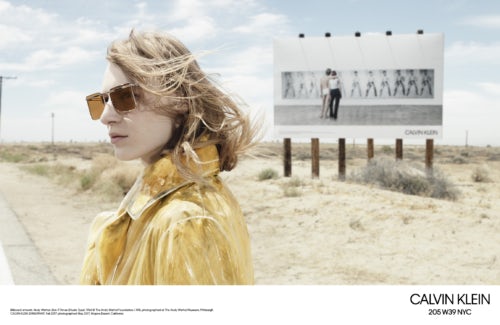 One of the images features the white bandana created by Calvin Klein for BoF’s #TiedTogether initiative, which the brand supported at its New York Fashion Week show in February.

Shot in California's Mojave Desert, the compositions are notable for the billboards in the background featuring the previous season's campaign in which models in underwear observe art by Andy Warhol.

"The campaign is a study in art and artifice, of the real and the imagined, the mannered world of high fashion combined with a sense of the everyday," the brand explains in a press release. "Ultimately, the campaign explores the cinematic and romantic outsider’s view of America, something of a dream world that has become concrete for chief creative officer Raf Simons and creative director Pieter Mulier." 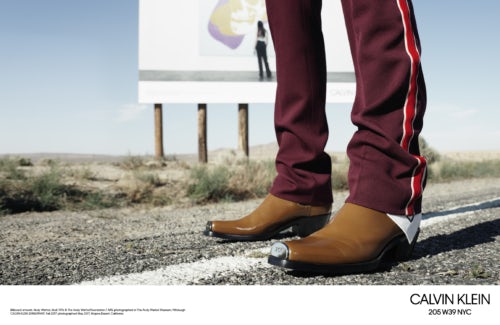 The campaign also marks the formal introduction of Simons' new designer denim line, Calvin Klein Jeans Established 1978, which will exist under the 205W39NYC umbrella. Each piece from the line is embossed with a leather patch featuring Richard Avedon’s controversial image of Brooke Shields as the face of Calvin Klein Jeans in 1981.

Simons joined Calvin Klein as chief creative officer in August 2016, and his collections so far have been a hit with both editors and buyers — the number of retailers set to stock the line has increased tenfold. — Osman Ahmed

Farfetch could go public within the next six months, according to a person familiar with the matter.

Sky News reported in June that the fashion platform, which connects shoppers with a curated network of boutiques and brands, was planning to list in New York with a value of up to $5 billion, with the IPO expected to take place within 18 months.

The news of an earlier exit comes as Farfetch welcomes two high-profile new board members. A new partnership with Chinese e-commerce giant JD.com, which invested $397 million, resulted in the addition of its founder Richard Liu to the board. And last month, when Farfetch inked a deal with Condé Nast to commercialise its content after the closure of Style.com, Condé Nast International chairman Jonathan Newhouse also joined the board. The company recently appointed corporate public relations firm Brunswick in the UK and US.

A spokeswoman for Farfetch did not respond to a request for comment on the timing for a public listing.

Chief executive officer Jose Neves has previously acknowledged that a public offering is the logical next step for the company, but has been reticent to lay out a specific timetable. “We don’t have any timing,” he told BoF in May. “But it is the next financial milestone for the business, that’s for sure.”

Farfetch surpassed gross sales of $800 million in 2016, up 60 percent from 2015, with estimated annual revenues in the region of $150 million. (Farfetch takes between 20 and 25 percent commission from its brand and boutique partners). The company is still losing money, but its core marketplace product “delivered significant underlying profitability” in the fourth quarter of the 2016 fiscal year, according to Neves. — Sarah Shannon