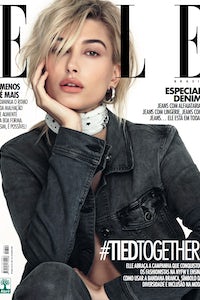 Both models are pictured wearing white bandanas on their respective covers, in support of the initiative's message of solidarity, human unity and inclusiveness.

Elle Brasil’s editor-in-chief Susana Barbosa was inspired to join #TiedTogether when it launched during New York Fashion Week in February and was embraced by designers including Prabal Gurung, Diane von Furstenberg and Raf Simons at Calvin Klein. 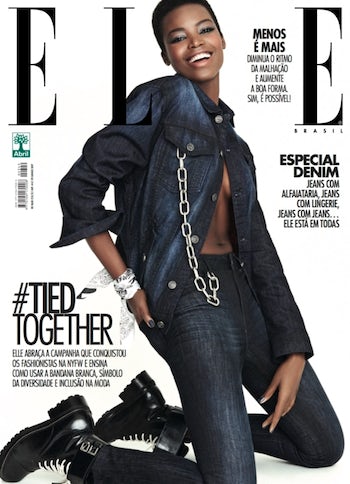 Maria Borges on one of two covers for Elle Brasil | Source: Courtesy

Barbosa said in her editor's letter that the focus on #TiedTogether felt like a natural fit, and in keeping with Elle Brasil's regular coverage of issues surrounding diversity and inclusivity.

A feature within the issue discusses fashion’s need to speak out about injustice, while a fashion spread offers inspiration for styling a white bandana. About half of the magazine’s 60,000 copies, on sale from June 6, will include a white bandana designed by Brazilian brand Ellus. Elle Brasil has also agreed to make a donation to the UN’s Refugee Agency, one of the two charities supported by #TiedTogether.

Elle Brasil's support is the latest in a string of global activity for #TiedTogether. Following the momentum created during fashion month in New York, London, Milan and Paris, the initiative has been embraced in Mumbai, Mexico City and Toronto.

During a time of turmoil and fear in many nations, the movement continues wherever the global fashion community has a public platform from which to share its support. Find out how you can get involved at tiedtogether.businessoffashion.com. — Michael Edelmann