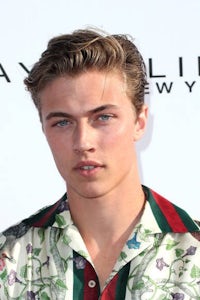 Lucky Blue Smith is the latest star name to join the IMG roster.

Having already starred in advertising campaigns for Tom Ford, Calvin Klein and H&M, as well as appearing in the pages of Vogue, i-D and Love, Smith is now ready to take his career a step further by joining the prestigious management group.

“I wanted to take my business to the next level and seeing what IMG has done for many models, influencers and entertainers, it made them really seem like a good fit," the 19-year-old model and musician tells BoF. "It’s a company that I can start building a great, solid relationship with.”

Smith, who was raised in Utah and Los Angeles, was scouted at the age of 10 and was signed by Next Model Management at age 12. His big break came when he and his siblings were photographed by Hedi Slimane for Vogue Japan. By 2015, he had shot a dozen magazine covers and walked the runways of Versace, Marc Jacobs and Fendi.

Now, Smith boasts over three million followers on Instagram alone, and while he continues to model, is eager to explore opportunities beyond fashion too. “IMG is great at big picture thinking and I’m excited to work with people that can think outside of just modelling," he explains. "I’m in a band with my three sisters and I started working on a film as well. [IMG] has a great understanding of what I want to do and are willing to make it work and happen.”

Senior Manager of IMG Models, Mimi Yapor agrees: “Part of the strategy is sitting down with Lucky and creating his brand in a partnership. Modelling is a base for that but then to complement all the other parts of his life, it’s about building the bigger picture in the long term. It’s about turning him from Lucky Blue the boy to Lucky Blue the man.” — Christopher Morency

Artémis, the investment arm of the Pinault family, has acquired a minority stake in Giambattista Valli.

Despite interest from a number of investment firms, it is Artemis — the majority shareholder of luxury group Kering — that will see the Paris-based couture and ready-to-wear brand into its next chapter.

“Artémis and Maison Valli share a same passion for art, freedom of expression and creativity," said Valli in a press release. “With this alliance, we are uniting the excellence of two houses with similar visions and I am truly honoured to be given the opportunity to get access to the Artémis know-how in order to pursue, with the Pinault family, the story of Maison Valli.”

Of course, until now, Valli has remained fiercely independent, as the sole owner, CEO and creative director of the brand he founded in 2004. "Being independent gives me the chance to write my own story the way I want to write it, and that's priceless," he told BoF in 2015.

But with the designer’s profile rising steadily thanks to a strong red carpet presence, and the launch of diffusion line Giamba in 2014, the partnership comes at an opportune moment.

“In providing Maison Valli with the Artémis means and expertise, we are delighted to support its development and to contribute to the growth of this great company, driven by the immense talent of its designer,” said Artémis CEO Patricia Barbizet. “Maison Valli will benefit from the support of a professional shareholder in order to enter a new chapter and reveal its full potential.” — Megan Doyle