The Chinese clothing and textile giant, which already controls Gieves & Hawkes, Sandro and Maje, has purchased a majority stake in the Swiss clothing and leather-goods brand.

SHANGHAI, China — Following a report on BoF in January of Shandong Ruyi Group’s emergence as a leading bidder for Bally, the Chinese textile producer has signed definitive agreements to buy a majority stake in the Swiss luxury brand for an undisclosed sum. The deal came at a time of “strong, continuous” growth for Bally’s business, notably in Asia, according to the brand.

Bally’s parent, JAB Holding, will retain a minority interest in the company, making it the only fashion brand that JAB has sold, which it will retain a stake in. (It has been offloading most of its luxury assets, selling Jimmy Choo to Michael Kors and Belstaff to British petrochemicals giant Ineos in 2017.)

Ruyi, based in eastern Shandong province, had discussed a price of around $700 million, according to people with knowledge of the matter — and was not the only suitor. Chinese apparel manufacturer Fujian Septwolves Industry Co. and conglomerate Fosun International Ltd. had also courted Bally, according to a Bloomberg report last September.

“Bally’s history and its products greatly complement our existing strength in ready-to-wear apparel,” said Yafu Qiu, chairman of Shandong Ruyi Group, in a statement. “This is an important milestone for Shandong Ruyi Group in our enterprise to become a global leader in the fashion apparel sector.” 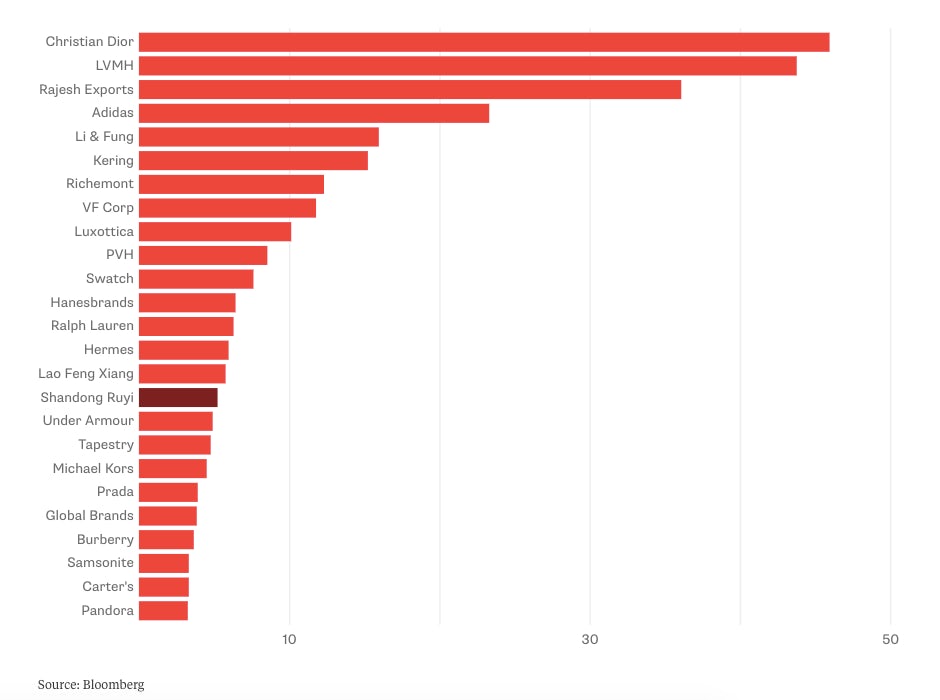 Indeed, Ruyi has all the resources in place to become a domestic luxury powerhouse (according to Bloomberg, if the Chinese firm were listed, it would be among the top 20 global fashion and luxury groups by revenue.) And there’s good reason for that ambition: China accounted for three-quarters of luxury spending growth in the eight years through 2016, according to McKinsey & Co., and will have 44 percent of the global market for such products by 2025.

The group owns a fully integrated value chain with operations spanning across raw materials cultivation, textiles processing, and design and sale of brands and apparel. However, there are limitations when it comes to potential synergies with the group’s recent luxury acquisitions. It is unclear how many fabrics from its own mills in Shandong are a good fit for luxury brands with a distinctly British or Swiss heritage, for example.

Founded in Schonenwerd, Switzerland in 1851, Bally was previously owned by US buyout firm TPG, which agreed to sell the brand to JAB in 2008. At that time, it is understood that Bally had more than 400 million Swiss francs ($411 million) in annual sales. “The arrival of Shandong Ruyi Group and their vision will significantly accelerate our growth in key segments and territories as we complete the turnaround of this iconic brand,” said Bally’s chief executive Frédéric de Narp.

Watch Out, LVMH and Kering — China Inc. Is Coming