This Eco-Luxury Label Is Backed by ‘The Patagonia of Jeans’

Stockholm-founded Bite Studios is challenging the fashion industry’s approach to sustainability and has received a minority investment from Nudie Jeans.

This Eco-Luxury Label Is Backed by ‘The Patagonia of Jeans’

Stockholm-founded Bite Studios is challenging the fashion industry’s approach to sustainability and has received a minority investment from Nudie Jeans.

LONDON, United Kingdom — Is there such thing as being too picky? According to the collective behind Anglo-Swedish fashion and jewellery brand Bite Studios, that’s exactly what it takes to achieve the ethically sound designs that they produce. “We have to say ‘no’ 99 out of 100 times to things if we want to stay true to our values,” Bite Studios’ chief executive William Lundgren told BoF. “When we’re trying to find the right partners, it’s like looking for a needle in a haystack.”

Co-founded in Stockholm by a team that includes Lundgren; his partner and chief operating officer Veronika Kant; Elliot Atkinson, who previously showed his namesake brand as part of Fashion East; and Suzanne Liv, a fashion photographer, Bite Studios opened its doors for business in March 2018, swiftly attracting the attention of 11 stockists, including Maiyet and NK department store.

Now, the eco-luxe label has taken on minority investment from Nudie Jeans — dubbed ‘the Patagonia of denim companies,’ having long championed jeans that are sustainably produced, repaired and recycled — as well as Lennart Grebelius, Forsman & Bodenfors' founder Björn Engström and Galleri Andersson. Collectively, these four investors own 30 percent of Bite Studios. 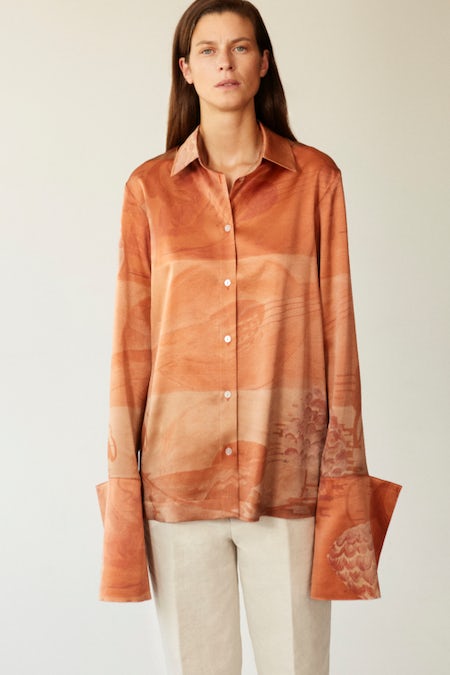 Having been trading for less than a year, Bite currently has a turnover of just £80,000 (about $102,216) but Lundgren says he is aiming to achieve £3 million within three years.

It was Bite’s offering of “sustainable fashion in the female segment” that appealed to Nudie co-founder and vice president Palle Stenberg. “The product can be worn over time, the opposite from ‘war fashion.’ A modern woman wants to make a difference. It’s the only path there is,” he told BoF. For Lundgren, it was important to only take on investors who were driven by the same values around sustainable business models.

“We were attracted to [Bite’s] commitment to transparency and their considered methods of production, such as working with local and natural materials, like their organic silk produced in Hertfordshire,” added Paul van Zyl, founder of The Maiyet Collective and an early supporter of Bite. “Elliot’s Q&A session on ‘the art of building a luxury brand’ [hosted at an event at Maiyet] sold out, which illustrates an interest [among consumers] in sustainable principles.”

Operating from an atelier in East London, Bite’s clothes are designed and produced on-site from only natural, 100 percent ecologically certified fabrics, with no harmful toxins. It was important, said Atkinson, who is head of design at the label, to create something “that feels timeless but directional,” with environmental ethics at its core. Each collection consists of a maximum of 20 fixed and updated styles, made from materials sourced across Europe, from countries such as Italy and Switzerland.

The approach may sound modest but there are big plans in store for the fledgling label, where Nudie’s undisclosed investment will be used to grow the design team as well as relaunch their website. In March, Bite will reveal a new webpage that incorporates e-commerce and a smoother payment option, with the aim of generating a minimum of 25 percent of sales online in three years.

The company is also working on its first chip-tracked garment, developed with the Swedish Fashion Council and Neue, which will launch in June and allow customers to track the environmental impact of their clothes, where it was made and who it was made by. “It’s about building value into our products. We don’t want to stop the relationship with our customer after a sale,” said Lundgren, noting that Bite offers free repairs during the whole lifetime of a garment and also purchases back worn designs, paying customers 20 percent of the original price, and resells the items later in an archive sale for a discounted price.

The label has already won over fans like Tamsin Blanchard, a veteran journalist and editor focused on sustainability and ecological issues in fashion. “This is a brand that understands and shares the values of a new generation of women, who think before they buy and want to find a brand they feel they can trust,” she told BoF, adding she had faith that “Bite’s beautifully made staples will stand the test of time.”

How to Build a Sustainable Brand Like Patagonia on a Budget

Millennials Say They Care About Sustainability. So, Why Don't They Shop This Way?