Tim Blanks reveals why Anna Sui is one of fashion’s best storytellers. Tim Blanks reveals why Anna Sui is one of fashion’s best storytellers.

LONDON, United Kingdom — As the man in charge of the Metropolitan Museum’s Costume Institute, Andrew Bolton is the most powerful fashion curator in the world, so I took notice when he told me once that he believed Anna Sui was exactly the kind of American designer whom museums would one day be lining up to showcase. I wasn’t about to disagree. I’ve loved what she does since I first saw her clothes in the early ‘90s. That’s one reason why I was so flattered when she asked me to work on “The World of Anna Sui,” a thematic overview of her career that Abrams is publishing in May 2017. The other reason was simply that you can get a bit messianic about someone whose remarkably consistent creativity and furious imagination haven’t had what I consider to be their fair due. As “story-telling” becomes more of a thing in fashion, it’s more than time to acknowledge a woman who’s been nothing less than American fashion’s best storyteller for nearly three decades. (Okay, I’ll give you Marc Jacobs as well — and he happens to be a close friend of Sui’s.)

The book accompanies the first of those exhibitions Bolton was predicting. On Wednesday morning, the Fashion and Textile Museum in South London will announce Sui as the subject of the first-ever retrospective of an American designer in the UK. It’s also the first-ever show anywhere devoted solely to her work. New York might seem a more logical choice, but London actually makes perfect sense. For one thing, Sui’s career has been distinguished by an extraordinary attention to fabric research, so where better to showcase that than a textile museum? For another, British pop culture has been in her blood since she was a kid in Detroit, making her brother turn over from his baseball game so she could watch the Beatles on the Ed Sullivan Show. (He still hasn’t forgiven her.) Carnaby Street and King’s Road, mod, punk and glam, Granny Takes a Trip and Biba have been running themes of Sui’s for years. Same with Anita Pallenberg and Keith Richard, Marianne and Mick, Jimmy Page, David Bowie: they’ve cast shadows as long as those of her hometown heroes Iggy Pop and the MC5, who she’d see playing in a local park when she was young.

It’s more than time to acknowledge a woman who’s been nothing less than American fashion’s best storyteller for nearly three decades.

Well, you know that’s the kind of detail I can’t get enough of. Sui had a Zelig-like ability to put herself in The Place to Be: the Grande Ballroom in Detroit, the Mercer Arts Center, the Mudd Club and Max’s Kansas City in New York, the Marquee and the Roxy in London. And, while all around her crashed and burned, she had the presence of mind to never let herself be swallowed up by the scene. Her ravening curiosity helped too — why surrender to the oblivion of this moment if it’s going to make you miss out on what’s next? She also had the work ethic to transmute her experiences into collections of clothing that could tell her stories. 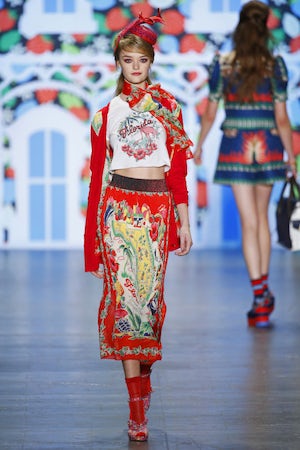 Which is how the exhibition next May will wisely set out to recreate the world of Anna Sui. Alongside the stories shaped by her fangirl enthusiasm for Britcults, there are equally rich strains of Americana — cheerleaders, surfers, cowboys — though nothing is ever quite as simple as that with her. When she's designing, Sui is just as likely to weave in a favourite book, a film, a song, a fairytale or a flea market find, along with figments of her past, a rock star, a folk artist or some fabulous character she’ll rescue from anonymity with scrupulously detailed research. And once all of that is brought together, it makes a collection whose multilayers mix the familiar and the strange in that slightly dreamy new-vintage flavour that is her signature.

On the weekend, I came across this quote from the multi-hyphenate John Berger: “A story is always a rescuing operation.” Meaning that, in telling a story, you’re saving something from obscurity. That made me think about how much Sui has saved since she launched her own collection at the beginning of the ‘90s, and how much I’ve learned about artists, artisans and designers from her testimonials to their work in her own. Andrew Bolton was absolutely right in his conviction that she’ll be the stuff of study, but I would hope that never diminishes the optimism, the beauty, the utter pleasure you’ll be able to take away from her clothes next May. And hopefully forever after.