Milan’s Design Week is a growing marketing platform for fashion and apparel brands from Nike to Loewe.

Milan’s Design Week is a growing marketing platform for fashion and apparel brands from Nike to Loewe.

MILAN, Italy — Milan’s Design Week, a full-blown galore of events, exhibitions, parties, dinners and so much more, revolving by and large around the world of interiors and spanning five intense and, at times, farcically frantic, days, was Milan at its best: lively, creative and, unlike fashion weeks, inclusive and open to the public. As such, it has been one of the key drivers of Milan’s creative renaissance — as well as a growing marketing platform for fashion and apparel brands.

Fashion likes to have all kinds of bagatelles in order to widen its playing field and strengthen its power — to sell, that is. Design, furniture and homeware are natural extensions for fashion brands, perfect tools for turning style into an all-surrounding lifestyle. So much so, in fact, that Condé Nast’s American arm is licensing the Vogue name to create a furniture line in partnership with high-end furniture company Dorya called Vogue Living.

What's most interesting is the way a fashion brand uses the curatorial practice to deepen the net of values around itself.

Of course, fashion began tapping the world of interiors a long time ago, starting in the wild days of heavy licensing in the 1980s, when even bathroom tiles had designer logos on them. Today, the approach is more strategic, yet it’s still quite common for successful fashion brands to have an interiors division. Milano Design Week’s Salone del Mobile, the world's leading furniture fair, is an obvious place to showcase new goods. And this season, many fashion brands with established home divisions did just that, from Hermès’ leather and wood furniture, painstakingly detailed cabinets and abstractly patterned wallpapers to Diesel Living’s industrial-looking but warm and welcoming interiors; from Bottega Veneta’s ultra-luxurious sofas and leather objects to Giorgio Armani’s shiny zen-like wares and Rick Owens’ primal and tribal take on brutalism/modernism.

For others, it’s more about communications. Over the past few years, Camera Nazionale della Moda Italiana, the country’s fashion chamber, has endorsed the phenomenon under the brand Milano Moda Design. And during Design Week, insignias are here and there, in front of fashion stores, signalling some sort of design collaboration happening within. Generally speaking, it is forgettable stuff. The store windows, or maybe the entire store, house seemingly random design pieces, with no apparent meaning beyond getting a spot on the Design Week calendar. Cocktails and parties are thrown for a chair or a vase, but these events add little real content to the week. 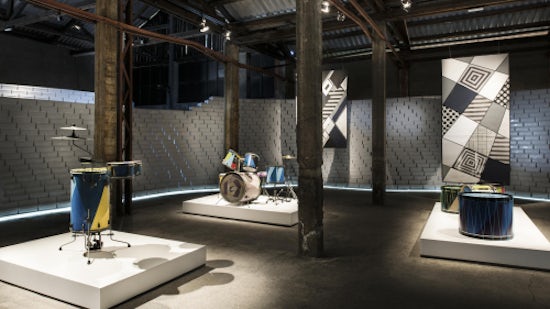 There are more progressive and productive initiatives, however. Design, as a field, is quite liquid. It sits somewhere between objects and abstractions. It is the missing link between fashion and the art world, and this is often how it is used by fashion. Sometimes, fashion brands act like curators: selecting and showcasing design objects and makers that make sense for their respective worlds. In a universe as playful and idiosyncratic as Marni, for instance, it makes perfect sense to put up a market of furniture made in Colombia with braided plastic while constructing a crazy ballroom around it. For one, it’s an engaging way to turn the energy of a brand into a happening. In fact, Marni’s Ballhaus was one of the highlights of the week. Also interesting were the Lorenzo Vitturi collaboration with Valextra on a colourful installation and the Nike-sponsored exhibition “The Nature of Motion,” for which the sportswear giant collaborated with a number of designers, including Max Lamb and Martino Gamper, to create design installations revolving around the topic of movement. It was a huge, but intelligent, if at times predictable, way to explore a potentially banal topic.

Interesting collaborations can also happen in store windows, as was the case with luxury department store La Rinascente, where Hella Jongerius created a series of visually arresting, quixotic interrogations on the state of design that were as entertaining to look at as they were intense to read. Dodo's playful jewels, on the other end, provided carte blanche to up and coming design polymath Matteo Cibic to create funny ceramic creatures. Very Haas Brothers, but quite fresh.

What's most interesting with initiatives like these is the way a brand embraces a designer, leverages a style and ultimately uses the curatorial practice to deepen the net of values around itself. Sometimes, of course, branding and curating do not mix so easily. Aldo Lanzini's Knittown for Missoni, for instance, did not have any apparent meaning apart from showing a bunch of zig-zag fabrics on vaguely architectural shapes, which felt like a missed opportunity.

On the other hand, it was very interesting to see how Yoox, collaborating with Fondazione Cologni, curated the Doppia Firma exhibition: a selection of objects were created by edgy designers working side by side with superbly skilled artisans in fields as diverse bookbinding or metalsmithing, fuelling a truly progressive mix of tradition and innovation. 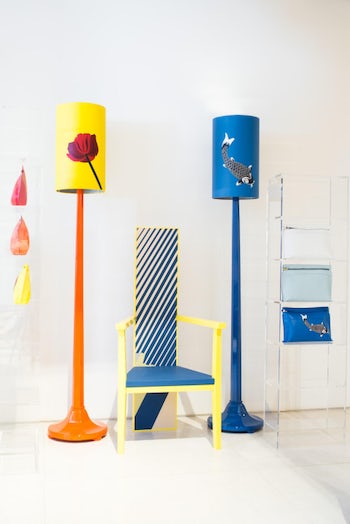 Along with curatorial initiatives, some designers also became furniture artists themselves. That's what Jonathan Anderson did at Loewe, applying a marquetry technique — painstaking intarsia made with leather, essentially — to a set of vintage 1930s pieces to great effect. In this respect, while stressing Loewe’s savoir faire, Anderson added just another chapter to his own personal narrative as modernist/absurdist master. Also noteworthy, were the wonderfully bonkers, colourful pieces produced by hip art directors M/M Paris with Plusdesing gallery: a small collection of tables and other furniture which initially started life as props for a Dior Homme campaign.

Subtler strategies to infiltrate Design Week were deployed by several other fashion players. fabric wizard Giovanni Bonotto — a supplier to everyone from Comme des Garçons to Zara — created a lively installation with his intensely-wrought, multi-culti fabrications; fashion darlings Dimore Studio delivered a wonderfully intoxicating series of dark and textural ambient pieces that will get fashion aficionados salivating; and up-and-coming firm Studio Pepe produced a series of poetically raw carpets for CC-Tapis that would translate perfectly into wearable products.

In the end, fashion and design overlapped naturally and fluidly, but rather superficially. It would be more interesting to see fashion houses start wholly new furnishing concepts, merging dress and habitat in unexpected ways that are not just about decoration or surface treatment. That could lead to authentic progress. At the moment, it is mostly marketing. It ranges from the literal to the poetic, but does not add much to the overall design conversation.