Christopher Bailey's swan song for Burberry sounded a powerful call to action for LGBTQ+ rights around the world where freedoms are far from secure, argues Bandana Tewari. 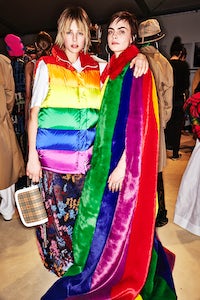 Christopher Bailey's swan song for Burberry sounded a powerful call to action for LGBTQ+ rights around the world where freedoms are far from secure, argues Bandana Tewari.

MUMBAI, India — The only Yorkshireman most women from my part of the world knew growing up was Heathcliff, the protagonist in the Gothic romance “Wuthering Heights” by Emily Brontë. He was a Byronic hero — rebellious and arrogant, while romantically enticing — and the archetype alpha-male that symbolised brutal masculine force.

But there’s another Yorkshireman we, in fashion, got to know later in life — Christopher Bailey, who is the antithesis of that archetype. He is kind, sensitive, creative and proudly gay. For every industry heavyweight hit by allegations of sexual misconduct, from photographers like Mario Testino and Bruce Weber to executives like Guess co-founder Paul Marciano, there is a man like Bailey who is a shining example of how far men have evolved to be sagacious, mindful and willing to embrace a different type of masculinity that is quietly empowering for the entire LGBTQ+ community.

That he should use this momentous curtain call — Burberry’s final collection at London Fashion Week this month — to celebrate diversity was not just about fashion that blurred gender lines, a collection that could easily be relegated to a ‘fad’. For Bailey, it was a personal and powerful message that went beyond clothes. It was a plea to hold the rainbow with dignity — and a call for companies and individuals to uphold an unwavering commitment to LGBTQ+ rights, as this marginalised community continues its chequered journey across the world.

While we have the privilege of celebrating diversity on the fashion runway, let us not forget the people who are facing extreme brutality today in Russia, where LGBT teens have been ambushed by vigilante mobs and humiliated; Uganda, which has some of the harshest anti-gay laws in the whole of Africa; and Nigeria, the most homophobic place on earth, according to the Pew Research Center, where gay people are stoned to death; as well as countries like Afghanistan, Turkey and Iran, to name a few.

Chechnya’s gay purge, which began in February 2017, is reminiscent of Nazi concentration camps. In seemingly cosmopolitan cities like Dubai and Singapore, homosexuality is still criminalised, and often, a grey area of don't-ask-don't-tell pervades society, giving LGBT individuals a false and dangerous sense of security. Even in the most democratic of countries like America, the fight for queer rights is still a matter of life or death. Gabriel Arana’s report on “The Most Urgent Queer Political Battles to Fight in 2018”  lists everything from Trump’s attempt to ban on transgender Americans serving in the Armed Forces to how repealing Obamacare makes the poorest members of the LGBTQ+ family most vulnerable. “Queers of colour and transgender people will be hardest hit, especially when it comes to HIV/AIDS,” wrote Arana.

We cannot underestimate the power of an individual to catalyse change.

Back home in India, it continues to be a long uphill battle to get justice for the LGBTQ community as Section 377 of the Indian Penal code still bans “carnal intercourse against the order of nature” — an act punishable by life imprisonment. What’s little known is that it is a 16th century English law, imposed during the British colonisation of India, which makes this an unforgivable play of irony. If anything, it serves as a reminder that we are all interconnected in a world where injustices are perpetrated to those who are “different.”

Bailey’s last fashion show, therefore, cannot be taken lightly. It was about mobilising ourselves to serve those who have suffered deeply and quietly. Burberry’s support to LGBTQ+ will result in donations to organisations that aim to empower LGBTQ+ communities, such as the Albert Kennedy Trust (AKT), the Trevor Project and ILGA. "24 percent of the 150,000 young people facing homelessness in the UK identify as LGBT+ after experiencing abuse and rejection, just for being brave enough to come out to their families," Tim Sigsworth MBE, chief executive of the Albert Kennedy Trust, told Vogue.com. "Burberry's donation will support our ongoing work to provide safe homes and support to young people, grow our youth engagement programme and fund our plans to bring AKT to more cities, to reach the most vulnerable people across the country."

We cannot underestimate the power of an individual to catalyse change. Where governments have failed, individuals and NGOS have stepped in. India’s only gay prince, the Crown Prince Manvendra Singh Gohil of the state of Rajpipla in Gujarat, has made it his personal mission to campaign for reform of India's anti-LGBT laws. The prince announced in January he would build a public LGBTQ sanctuary on the grounds of his palace, offering rooms, HIV education and medical care, as well as vocational training. Gohil’s decision is especially important given his cultural context. He is now touring Australia — where same-sex marriage is legal — to campaign for changes to laws that criminalise homosexuality in many Asia Pacific countries.

"There has never been a more important time to say that in our diversity lies our strength and our creativity," said Bailey. There's evidence that consumers feel similarly. When Burberry took to Instagram to share an Alasdair Mclellan-lensed image of two men kissing on Valentine’s Day, it received the most likes of any social media post in the history of the brand.

But the brand's motives go much deeper than marketing. Indeed, to relegate the Burberry show to being merely a whimsical collection of gender-blurred clothes in a fancy set-up is doing disservice to the more deep-rooted ideological appeal Bailey made to the world at large. Fashion provides one of the most ready means through which individuals can represent themselves in their everyday lives and make visual statements about their identities. And critically examining the way you represent your true self through clothes is a step towards questioning and correcting a biased and bigoted system.

This exploration of truth through clothes and quest for sartorial integrity aligns with what Gandhi believed in — the concept of Ahimsa, which translates as “non-violence” and whose philosophy is rooted in not being able to “live and let live,” but rather “live and help others live.” Ahimsa, said Gandhi, “is not a garment to be put on and off at will. Its seat is in the heart and it must be an inseparable part of our very being.”