That young women photographers like Harley Weir, Petra Collins and Coco Capitán are being grouped together — prompting debate over the emergence of a new “female gaze” — is simultaneously positive and unnerving.

That young women photographers like Harley Weir, Petra Collins and Coco Capitán are being grouped together — prompting debate over the emergence of a new “female gaze” — is simultaneously positive and unnerving.

PARIS, France — Fashion photography is subject to trends in much the same way as the clothes it features. The last century produced a large and diverse range of photographic styles and techniques that now inform a wide constellation of aesthetic references, stretching from polished futurism to post-90’s grunge to a fantastical, antique opulence. Filter that through today’s ephemeral digital platforms like Tumblr and Instagram, and it’s clear that the most recent wave of emerging photographers have an incredible wellspring of visual language to draw upon when creating imagery.

In recent years, this agglomeration of references (and its resulting hybrids) have given rise to an exciting crop of talented young photographers who have approached the world of fashion with fresh eyes. Many of these new Generation Y and Z talents are female photographers shooting intimate images of female subjects, prompting much discussion on what has been called a new “female gaze.”

Borrowed from the worlds of art and cinema, the term has been assumed by the fashion industry to explain and classify the work of a host of women whose images empower women through their approach to the female body, youth, race, ageing and a celebration of the essentially imperfect nature of female beauty in daily life. Proponents of the idea are calling it a reaction to the prominence of the “male gaze” (names like Helmut Newton, Mario Testino, Mert Alas and Marcus Piggott come to mind), however it seems these young female talents themselves are less convinced by the concept than those responsible for pinning the label on them. 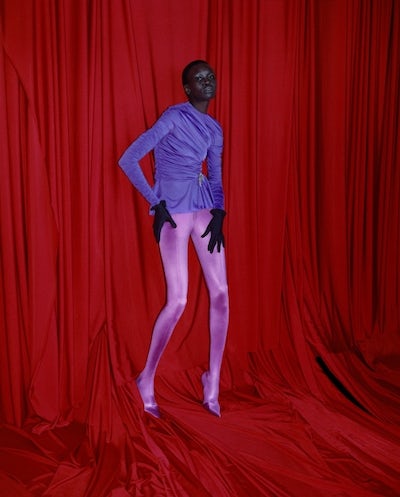 “Women have always been looking,” says 28-year-old Amanda Charchian, a Los Angeles-based Iranian-American photographer who feels uncomfortable with the recent trendiness of the term. Whilst women have photographed each other for fashion imagery for decades, their output has rarely been classified so specifically. And the idea that young women like Harley Weir, Petra Collins, Coco Capitán, Charlotte Wales, Gia Coppola and Charchian are being labelled in this way is both positive and unnerving all at once.

“I think our aesthetic is perhaps grouped as a response to how photography, specifically in the field of fashion, used to be thought of, and how we don't see women like that anymore,” says 24-year-old Coco Capitán, a Spanish photographer whose collaborations with fashion houses like Gucci and Paco Rabanne have run parallel to her studies at London’s Royal College of Art, from which she graduated last year with a Master of Fine Arts in Photography. “I think our photography shares a common interest in finding new ways of representing the female body and the female subject even if done through different aesthetics,” she continued. Capitán’s naïve, filmic imagery pays debt to the legacy of Juergen Teller’s spontaneous, unpolished style and the meticulous analogue representation of Collier Schorr’s early work, mixed with existential handwritten musings reminiscent of David Shrigley’s text-based art.

“I mostly take pictures of women that are aimed at women,” says New York-based British photographer Charlotte Wales, whose dewy, pastel-inflected images have graced the pages of British Vogue, Vogue Paris and Pop Magazine. She also shot the Spring/Summer 2017 Chloé campaign. “As a woman I approach that situation with empathy. I can imagine what it’s like to be the model, I imagine the various incarnations of the woman I want to be. I think perhaps it makes me a more sympathetic photographer. But I wouldn’t know because I’ve never been a man! I suspect you could draw parallels between my work and other female photographers working now; but you could also categorise it in lots of other ways that would put me in a different box: my race, my nationality, even the year I was born.”

This notion of intimacy and shared experience with a view to create positive representations of the female form (for a female audience) may be one of the few true threads that stitch together this fashionable notion of the female gaze, certainly when one listens to the self-referential, unapologetic raison d’être of each of these creatives — none of whom seem to be pushing any wider cultural agenda other than their own creative development. There is no doubt that certain artistic similarities are rife amongst their portfolios — close-up shots of female erogenous zones (and questioning what those may be), metaphoric representations of genitalia through flora and fruit and a tendency to portray a more realistic female body image than previous industry standards — but all these tropes are also evidence of the application of art photography references to fashion images. Coupled with the breakdown of censorship, they all point to a new level of understanding as to how the fashion image can portray contemporary womanhood.

I suspect you could draw parallels between my work and other female photographers working now; but you could also categorise it in lots of other ways that would put me in a different box.

“As I mostly shoot women and I am of a similar age, I experience a sense of sisterhood and familiarity with models. This provides me a huge amount of empathy that I consider a huge advantage,” says Charchian, who has photographed womenswear editorials featuring agency models, street-cast girls, friends and ‘personalities’ for magazines such as Garage and Numéro, and exhibited personal work in Stephen Kasher gallery and on the pages of her book Pheromone Hotbox. “I find femininity to be complex and immensely varied. I think the notion of what is feminine is always expanding, especially in political terms in which feminism is no longer cisgender and heteronormative. Being a photographer is to be curious about people, and there is no clear message to ‘the female gaze’ other than that women have a powerful perspective worthy of paying attention to. I don't think it takes the conversation further, but I do think that people learn through categorisation rather than difference.”

Evidently the artistic integrity of the female gaze and its commercial endgame are not mutually exclusive, and criticism of such a blanket term echoes the individualist approach of the photographers themselves. The British author and photography curator Susan Bright is quick to dismiss its over-arching nature as a ‘movement.’ “I am wary of assumptions depending on gender,” says Bright. “They don’t seem as rigorous or needed as arguments and thoughts on a ‘black gaze’ or a ‘queer gaze.’ I think these are things to be discussed, problematised and questioned, as they may have more legitimacy considering the white male gaze has been the norm for so long that any alternative must be taken note of. I think women are just as capable of a typically ‘male gaze’ (especially Ellen Von Unwerth, Lee Miller or Diane Arbus, to think historically) and vice versa. To suggest they are softer, more sensitive, more ‘feminine’ is totally essentialist.” 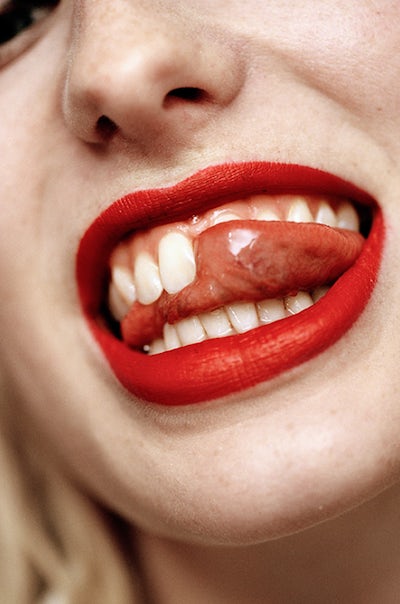 German model Lena Hardt concurs, yet admits that certain boundaries shift when working with women. Recently she has worked with Capitán and Talia Chetrit on campaigns and projects for Paco Rabanne and Céline, respectively. “Female photographers are a bit more sensitive, which I think helps them create a comfortable environment. It’s much easier for example to be naked or topless, or do weird poses,” says Hardt, “But at the same time it depends on the photographer’s character. It is not always about gender, but personality and a special connection with the model.”

Such critical perspectives on this ambiguous trend are not stopping fashion magazines and brands from banking on it, with entire issues of style publications dedicated to female photographers (i-D Pre-Fall 2016 comes to mind), photographic exhibitions exploring the theme (Vogue Italia’s Photo Festival devoted a section to it in Milan last November) and the growth of commercial projects professing positive body messages and notions of sisterhood that all somehow serve to attract the increasingly important attention of millennials. One who is nearly as frequently in front of the lens as behind it is Hungarian photographer Petra Collins; she walked in Gucci’s Autumn/Winter 2016 runway show before starring in the season’s campaign imagery, plays Venus in a recent Adidas Originals commercial and this week unveiled a suite of lo-fi film images she shot for Nordstrom’s Spring catalogue, pictures that seem to compromise none of her artistic style for such directly commercial means.

Gucci’s art director Christopher Simmonds of Simmonds Ltd. is a firm champion of Petra’s work (amongst others), describing her appeal as tapping into an “emotional richness.” “The female photographers I have had the pleasure of working with have all approached creating an image differently to their male counterparts,” adds Simmonds, who also counts Sies Marjan and Simone Rocha as clients. “For them the model is not an ‘object’ to be manipulated to one’s liking. Instead, the process is more about equals. It is totally against the ‘perfect’ depiction of beauty that fashion photography promoted for the previous decade. I really love Petra's view point. There's a naive innocence to her work that is filled with joy. Also Harley [Weir], whose work has so many layers within it. I find her depiction of women quite fascinating — the juxtapositions of rawness and tenderness that seem to play off each other is quite compelling.”

In some way, Weir’s oeuvre lends itself perfectly to the label of the “female gaze” if one considers the confronting, organic aesthetic of the British photographer coupled with the multi-cultural and generational approach she has taken to projects such as a short film entitled “Legs Are Not Doors” for Proenza Schouler and Calvin Klein’s powerful #MyCalvins campaign with its “I ____ in my Calvins” tagline. She rejects the idea of conforming to the label, however, via projects like her documentary-style collaboration with designer Grace Wales Bonner, whose politically-charged designs explore the black male identity with equal sensitivity (some of those images are currently on display at the prestigious FOAM photography museum in Amsterdam, as part of Weir’s first international solo show).

Such a dichotomy proves the point that the “female gaze” is much more than a navel-gazing millennial Tumblr trend, but rather a sweeping attempt to classify the rapidly-evolving practice of a group of young, intelligent and culturally-aware young women from different backgrounds taking risks and daring to be different. That said, their rise to prominence is nothing if not a positive shift. Like Nan Goldin before them, these artists may prove their enduring worth on the gallery wall long after they’ve finished playing with fashion — as long as it remains the art world’s fickle, fair weather friend.

Mario Testino: ‘I See Fashion Photography as a Business’