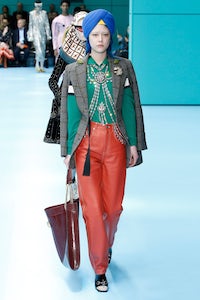 Every season, it seems that the fashion industry is confronted with allegations of cultural appropriation. This time round, Gucci has incited accusations for its insensitive use of traditional Sikh turbans in its Autumn/Winter 2018 show. It's not the Italian company's first time at the centre of the cultural appropriation debate, either. Last year's Dapper Dan references were considered problematic as well (the brand was called out for showing a bomber with balloon sleeves logoed in Gucci's signature Gs, resembling a jacket designed by the Harlem couturier in the 80s).

Despite social protest, designers don't seem to take these accusations seriously or simply struggle to figure out what they should be doing differently. It is almost guaranteed that another designer will be called out by September, when the next round of fashion week shows begin. It’s time we start making significant changes in the way we talk about cultural appropriation, how we react to these situations, and — most importantly — the way the industry works.

When an accusation of cultural appropriation emerges, there are often two clear and divisive reactions. On one hand, academics and social activists tend to be accusatory and highly critical in their arguments, dismissing the brand in question as careless, uninformed, disrespectful and incompetent. On the other hand, designers and creatives maintain that taking inspiration from other cultures is a necessary element of the creative process and, even, of cultural progress. So, which is right?

Both perspectives have value, but these binary arguments get us nowhere. This cycle has been on repeat for over a decade and all we have achieved is a conceptual conflict of inspiration versus appropriation, pitting academic criticality against artistic creativity. Cultural appropriation is a complex issue and it is not going to disappear overnight. Fashion, inevitably, will continue to take inspiration from other cultures. It’s a self-fulfilling prophecy, a perpetual impasse. To move forward, we need to accept that these issues are a reality and then rethink our processes. We need to create a constructive dialogue that allows for negotiation between these two impenetrable perspectives.

Some observers are quick to blame social media as the source of the problem. However, social media is not the cause of these events — it has simply given a voice to disenfranchised opinions previously silenced by the mainstream media. The reality is that we live in a global society, one in which cultural exchange is inevitable and such exchanges are fraught with complications. When those in power borrow ideas from historically marginalised cultures without giving any credit to those who they are referencing, they are endangering the original cultural relevance of that idea.

In @gucci ’s #pluriverse , we control our own identities. However, certain signifiers of identity are better left untouched. While various turban styles have been re-interpreted in fashion since the late 18th century, the four Dastaar that popped up on Gucci’s FW18 runway (on non-Sikh, mostly white models) was one that should have been left on the mood board.  There are many ways this disaster could have been averted: • 1: Hire Sikh models. Italy is home to the second largest population in Europe. It would have been a beautiful statement to see Sikhs proudly representing their religion on one of fashion’s most major runways. • 2: Do a fashion turban instead - Marc and Miuccia have shown gorgeous interpretations of 40’s/70's glamour that don’t read as sacred religious headwear. • 3: Just don’t do it.  While we’re not against looking to other cultures for inspiration, please remember the threat, assault, and persecution that these people face worldwide and the right they have to have to practice their beliefs in public. #sikh #dastaar #gucci #pluriverse #cyborg #turban #religion #culturalappropriation

The first step in this process is recognising the validity of these issues. When fashion brands and designers are accused of cultural appropriation as frequently as every season, there is clearly something wrong. There are many possibilities as to why this keeps happening, although each person must self-reflect on how this all relates to their work.  Here are two examples.

1. Rethink the Mood Board

Many creatives use mood boards as a design tool. They tend to be the foundational basis of any project; a convenient and aesthetically pleasing way to collate research and creative ideas. But the problem with mood boards is that the concept involves divorcing imagery from its context. When we create a mood board, we are pulling images from everywhere and anywhere, removing its source information and any related meanings, to develop an unrelated new visual language. This becomes an issue when the images used are related to cultures other than our own, of which we know nothing about.

Once we remove an image from its cultural context, it is easy to see how misappropriations can occur. This is especially true if the person creating the mood board isn’t necessarily the person designing the garments or producing the photoshoot. It’s likely that Alessandro Michele or a member of Gucci’s creative team travelled to South Asia and was intrigued by the draping of a Sikh turban they saw, consequently sharing this image to other several other colleagues — thus losing the original reference and religious significance. This begs the question: Why are creatives so dependent on mood boards and why do schools teach design students to use images in this way? Should mood boards include citations or references to ensure meanings don’t get lost? Is that even possible? What other approaches can we take to gathering inspiration and preserving meaning?

It was obvious where Michele found his inspiration for the latest Gucci collection, so why weren't Sikh religious groups, activists, models and designers contacted for input, involved in the design process and credited in the show notes for their influence? Cross-cultural partnerships and collaborations can produce a depth of understanding, invaluable insights and unprecedented innovation.

Amid the controversy of last year's social media backlash, Gucci acknowledged Dapper Dan’s influence and initiated a historic collaboration with the designer. These partnerships and collaborations should be an integral and rewarding part of the design process — not conceived as forced PR remedies for such situations. We have a tendency to think of designers or stylists or editors as “creative geniuses." While they are indeed talented, almost all creatives take inspiration from a variety of sources. The desire to maintain this genius personality can dissuade a designer from crediting the sources of their inspiration. Moving forward, creatives should be encouraged to take time to work with their sources of inspiration as an essential part of their methodology.

These are only a couple of many touchpoints within the creative process that are contributing to rampant cultural appropriation in the industry. As much as we try, we will never be able to demarcate cultural exchanges in fashion as explicitly positive or negative phenomena. Instead of dismissing each other, creatives and academics need to work together to understand each other and to create a dialogue across cultures. It’s not just designers who need to rethink their processes, but also the editors, marketers and those involved in the production of fashion. Fashion is, at its core, a financially motivated industry and there are some inherent limitations that come with that. Still, the industry has the potential to bring people together to create exciting, rewarding and symbiotic exchanges of ideas. It’s worth trying to tap that potential.

Anu Lingala is a trend forecaster and cultural strategist.

Fashion Does Not Need Cultural Appropriation