CHONGQING, China — There is a new mantra for many of China’s powerful young buyers and boutique owners. In this remote megacity of 30 million people, located 1,600 kilometres from Shanghai, finding the right “glocal” approach is everything, says Stephanie Wu, who alongside her two colleagues Yina Hu and Di Wu, founded their fashion boutique S.N.D. in central Chongqing five years ago. A second store in the IFC Chongqing tower — one of countless skyscrapers hugging the clouds in this metropolis — soon followed.

Chongqing’s GDP was 1.76 trillion RMB in 2016, which is around US $275 billion. To put this in the global context, it means that the economy of this one Chinese city is already bigger than that the entire economy of Qatar or Finland.

When the stakes are this high, it’s no wonder that localisation has become an increasingly important competitive advantage for the likes of Wu and her colleagues to face off the buying power of much larger incumbents like Lane Crawford and I.T. But more to the point, it is about finding the sweet spot between global trends and her hometown’s local market tastes. That fine balancing act is how she attracts clients to S.N.D.’s brand mix, which includes Self Portrait, Victoria Beckham, Chiara Ferragni and Opening Ceremony alongside leading Chinese designer labels like Ms Min and Immi.

The economy of this one Chinese city is already bigger than that the entire economy of Qatar or Finland.

Sometimes it comes down to the smallest of details: a bestselling dress for women in Chongqing can be a silhouette that is just centimetres longer or shorter than the trends elsewhere in the country. And the unique occasions that her customers dress for in this part of southwestern China are something that only locals can understand. Rather than focusing purely on luxury and designer clothing, many smaller boutiques are venturing into contemporary and advanced contemporary to satisfy consumers who are increasingly price savvy and value conscious.

This is the case for many young multi-brand boutiques across the country. Chongqing is just one in a newly crowned group of cities that the Shanghai Media Group coined in China’s “15 New First Tier Cities”: Shenyang, Hangzhou, Wuhan, Nanjing, Tianjin, Suzhou, Xi’an, Chengdu, Changsha, Qingdao, Zhenzhou, Dalian, Dongguan, and Ningbo are the others that are considered to have joined the ranks of Shanghai, Beijing, Shenzhen and Guangzhou. There are 30 second-tier and 70 third-tier cities also on SMG’s extensive list. 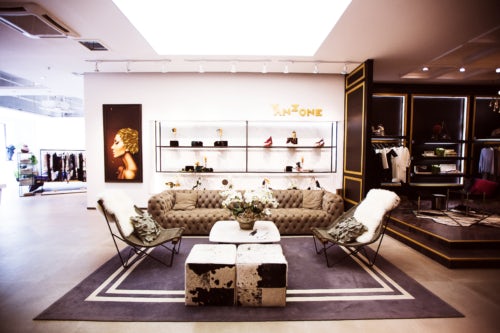 Meanwhile, some second-tier cities that were once off the fashion retail radar are now shining brighter. Fiona Zheng, founder of Tanghui in Tangshan, Hebei province, explains: “Tangshan is a heavy industrial city with population of almost 8 million. Fashion consumption for designer labels began in recent years with the rise in standard of living. Although customers in Tangshan tend to be guided heavily by brand awareness and celebrity PR, they do develop strong brand loyalty if they find the products attractive, regardless of price point.”

In such smaller Chinese multi-brand store formats, the brands that provide ease of logistics and fast replenishment are those that are able to maintain a healthy relationship with their stockists.

“When stocking a brand in our store, we look at factors like reorder process, brand’s own marketing push, celebrity placements, ROI… these factors all affect sales performance for us of course [but] for brands from outside China, if the reorder process takes too long, it is very unrealistic for us,” says boutique founder Cheri Wen.

Wen founded her 500-square-metre store called Showroom Xiu in 2014 after returning from college in London, in Guiyang, a rising second tier city in Guizhou province. In 2016, she launched her second store, TAG (The Ark Gallery), also in Guiyang.

For S.N.D., Tanghui, and Showroom Xiu, more than 80 percent of sales come from in-store sales, with the rest via online, emphasising the importance of customer experience as well as direct, personal service. Here are some of the up-and-coming retail power brokers in China’s new first-tier megacities and second-tier cities.

Guo Ziyi of Round Round
Nanjing, Jiangsu province
Focusing solely on local designer labels, Round Round was founded by local design guru Guo Ziyi. With four stores across Nanjing, Round Round stocks brands including Ms Min, Comme Moi by Lv Yan, Reineren and Immi, as well as Qiu Hao and Ricostru, whose collections have been featured in Vogue Italia.

Lee Liao of Bazan
Foshan, Guangdong province
Spanning 1,000 square metres, Lee Liao founded Bazan in 2008 after her studies at L’Institut Marangoni in Paris. Her love for travelling and fashion led to the launch of Bazan, where she has created a loyal fan base for brands like Marni, MM6, Damir Doma, Erika Cavallini, Iceberg, Just Cavalli, Ports 1961 and local designer labels.

June Shan of Juneshan
Wenzhou, Zhejiang province
June Shan lived in Italy and gained experience in fashion retail before returning to China and launching Juneshan in 2013. Today, with two standalone boutiques, one focusing on bridal and the other on advanced contemporary and contemporary labels, Juneshan currently stocks Marni, Rochas, MSGM, Ports 1961, 3.1 Phillip Lim, N21, McQ over 350-square-metres of store space.

Meimei Ding is the chief executive of DFO International, a market development agency with a Shanghai showroom serving international brands across China and Southeast Asia.