Op-Ed: Why Fashion Needs to Think Beyond the Photo

Fashion must confront the content opportunity presented by the digital age; new visual platforms should be embraced not scorned, argues Sølve Sundsbø.

MILAN, Italy — Photography revolutionised society, and few industries in our world have come to harness its creative and commercial capacities more than fashion. However, one of fashion’s oft-repeated mantras from the last decade has been the line, “print is dead.” Relative to one’s professional role or first-hand experience, there may be compelling stories to offer on either side of the refrain, but how does it serve fashion’s future to keep arguing this point? While this catchphrase has been bandied around in untold numbers of articles, meetings and casual conversations, it seems that a far more interesting and positive response has taken hold. The point is not that “print is dead” (and it isn’t.) The point is that, by looking beyond the still image, fashion has an opportunity to extend and evolve its legacy of inventive image-making.

For most of its past, fashion has used the printed page as its primary form of communication. Print magazines, in particular those under the direction of legendary editors and art directors, have guided generations of audiences. This rich legacy could never have flourished or captured our collective imaginations without the extraordinary photographers whose names loom large and whose interpretations of fashion are etched in our memories. I will never forget the first time I saw a classic Avedon or a classic Penn. It filled me with an incredible optimism and desire to communicate through photography.

When it comes to short-format film, it was the music videos of the 1980s that first made me conscious of this new media form and its potential. Interestingly enough, many of the most interesting videos of that era were made by fashion photographers, including Stephane Sednoui, Jean-Baptiste Mondino and Bruce Weber.

It is essential to embrace the new in order to truly value and appreciate the old.

But the history of the moving image in fashion is considerably shorter than stills. Yes, there were early visionaries such as Guy Bourdin, who adopted motion before most fashion photographers, but the infrastructure of our industry — and the culture at large — was not yet built to showcase his creations. It was not until 2003 that Bourdin’s films were published online, appropriately enough by Nick Knight and SHOWstudio.

What Bourdin may not have known, but what Nick Knight certainly understood, is that screens would become the dominant media format for the future. Advancements around devices and screen technology have fundamentally altered how citizens conduct their lives and perceive the world.

From a personal and professional point of view, the process of making film has become considerably more accessible to photographers: better digital sensors have made camera and lighting technology easier and therefore more accessible for use in film. As a result, the creative process has become more flexible and considerably cheaper. All the things I wished I had the opportunity to capture in motion as a beginner have become possible.

There is no turning back, which is why fashion must confront the most urgent and rousing content opportunity it has faced in the digital age. 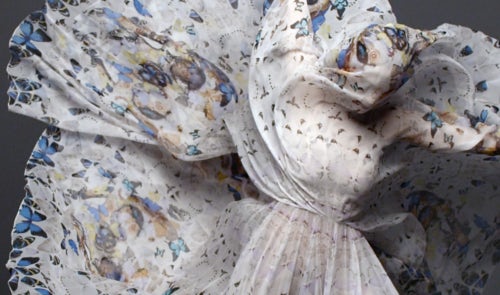 It’s natural for any creative not to immediately embrace a new media because it’s easy to feel that you are moving away from your original vantage point. In my opinion, it is essential to embrace the new in order to truly value and appreciate the old. There is no conflict, really; they both need to exist side by side and with respect for each other. The same creative energy is needed for print and for film to exist; they are not mutually exclusive.

If we consider all of the greatest fashion magazines and brands that have touched our lives and enriched our culture, a defining characteristic which binds them all together has been their commitment to publishing innovative photography. And great, memorable photographs bestow authority upon brands and magazines.

In the same way that viewers of traditional television have been seduced by high quality streaming alternatives, so too has fashion’s print audience been seduced by the internet and social media. The TV revolution is important to understand not because of any particular new platform or program, but because collectively, these platforms looked to the future and with unflinching drive and infused entertainment culture with a newfound sense of discovery and progress.

Consider that we have only started to see how screen technology will impact fashion and the moving image. For example, social media, which I consider to be in its infancy, is changing how we shoot, edit and watch video. Whereas motion’s standard format was once 16x9, it has evolved vis-a-vis Instagram into square and now vertical formats, which not even our cinemas, computer monitors or television sets have accounted for.

We are also seeing the development of new LED screens which can be cut into any two-dimensional shape or bent into three-dimensional forms. According to LED developers, this technology will become so inexpensive that we will no longer see traditional outdoor media installed with paper and glue. Electronic billboards, kiosks and other forms of site-specific media will be controlled remotely, from a central hub. It’s worth noting that light emitted from a screen has a greater chance of catching our eye than paper scenery. Factor in motion, and the visual becomes almost inescapable.

The history of fashion's moving image is ours to write.

Fashion’s nature is often to look backward — to find references and points of departure from which to make something new. But references themselves are by nature old.

When I look at an artist’s work, whether a painter, sculptor, director — whoever they are — what strikes me is that the work which endures is most often what was thought of as experimental at the time.

New and innovative visual platforms are commanding fashion to respond with fresh approaches to motion. Print is not dead, but even if there has been a decline, we should not be navel-gazing. We must embrace the incredible creative prospects of our changing ecosystem.

The fashion brands and magazines that will be the most successful at retaining and engaging their audiences will be the ones that look beyond the still image and foster a new environment of high creative achievement in motion.

The history of fashion's moving image is ours to write.

The Photo Vogue Festival, taking place in Milan Nov. 15-18, will debut a solo exhibition by renowned Norwegian photographer, Sølve Sundsbø — one of the most original voices in contemporary fashion photography. His exhibition, Beyond the Still Image, will appear in the prestigious Palazzo Reale from Nov. 15-Dec. 9, produced by Vogue Italia and co-curated by Michael Van Horne, Director of the Art + Commerce Image Archive and Alessia Glaviano, Vogue Italia.