Op-Ed | Why Influencers Are Critical to Tapping Chinese Millennials

WeChat and Weibo are unique in their ability to connect with the Chinese millennial. The secret? The platforms’ influencers, argues Hanzi Shen.

Op-Ed | Why Influencers Are Critical to Tapping Chinese Millennials

WeChat and Weibo are unique in their ability to connect with the Chinese millennial. The secret? The platforms’ influencers, argues Hanzi Shen.

URBANA-CHAMPAIGN, United States — Let me tell you about a day in the life of a 21-year-old Chinese girl. She wakes up with her smartphone in bed and opens WeChat. She reads an article about new season trends by a fashion blogger she’s been following for a while. She likes a dress the blogger is wearing, though it’s from a niche brand in Los Angeles that she’s never heard of. She wants it for an upcoming summer trip. She clicks on the link to buy and purchases it using her WeChat wallet. The dress will be delivered to her by the end of the following day.

According to Goldman Sachs, millennials (described in China as the “post-80s” and “post-90s” generations) account for 31 percent of China’s total population, around 415 million. Boston Consulting Group (BCG) estimates that millennials represent 40 percent of the total Chinese urban population between the ages of 15 and 70, a proportion that is increasing. This demographic already dominates the consumer market in China, and according to BCG, millennial consumption is projected to reach 69 percent by 2021. And 73 percent of the post-80s and post-90s generations use media apps such as WeChat every 15 minutes, according to the Chinese Academy of Social Science and Tencent Research Institute.

This is a generation that consumes information through a single channel, and bloggers play an important role in connecting brands with consumers. For brands looking to enter the Chinese market, influencers are a key way to reach target consumers. But this ecosystem has become more complicated than ever, due to China’s unique digital environment, the lifestyle and preferences of Chinese millennials, and the rapidly increasing number of bloggers.

A few years ago, influencers like Mr. Bags and Gogoboi began to appear on WeChat, writing articles about celebrity fashion and trends. It was the first time Chinese consumers had heard about fashion and luxury from an individual voice, rather than ad campaigns or fashion magazines. The independence of their words appealed to consumers and WeChat became a platform that nurtured KOLs (key opinion leaders).

Certainly, WeChat (along with Weibo) is one of the only social media platforms available in China: the Great Firewall blocks platforms like Youtube, Twitter and Instagram. The result is that WeChat has become a super app that works like Facebook, Messenger, Amazon, Google and Instagram all rolled into one. It even allows users to open stores, while public accounts can generate profit through ads. What’s more, it merges social media and mobile payments in a seamless way.

Having fashion bloggers for marketing is cheaper, and it also helps to target potential customers.

When social media, messaging and retail all takes place within a single platform, influencers become critical in exposing brands to the site’s user base. “Their way of delivering messages appeals to their readers, so those followers have trust in them,” says Tao Liang, aka Mr. Bags, whose collaboration with Givenchy sold out immediately through his WeChat channel on Valentine’s Day.

Weibo, often likened to the Chinese version of Twitter, allows influencers to share street snaps, short videos and live streaming, together with links to purchase products, which in turn generate profits for themselves.

Savi, an Atlanta-based Chinese blogger whose account “Savislook” now has 2 million followers on Weibo, started vlogging on Youtube and Youku (Chinese version of Youtube). She started using Weibo and WeChat at the request of her fans. “Some people don’t have enough time to finish a video,” she says. “They still want something more intuitive and convenient.”

“It’s easier for fashion bloggers to make money now,” adds Gogoboi, who boasts 7.3 million followers on Weibo. “And it’s easier than before to become one.”

However it’s still hard to name an influencer on the scale of Leandra Medine or Chriselle Lim among all these Chinese fashion bloggers, of which there are an increasing number. As a result, brands, especially high-end brands, often choose choose celebrities like Angelababy or Kris Wu for their marketing campaign, as that is a safer persuasive choice.

Some micro-influencers with highly engaged fans, like Savi, stand out from crowd. Besides outfit inspiration, she also shares travel and wellness tips with her followers. “It’s different now. They want to know you as a whole person,” she explains. “My content is not only about clothing, all different aspects —makeup, photography, music and text.”

San Francisco-based clothing brand Everlane targets Chinese consumers through fashion influencers, including Savi. “They found me at first,” she says, explaining that the brand specifically partners with Chinese US-based influencers who have worn their products before and exhibit a similar minimalist aesthetic. “Having fashion bloggers for marketing is cheaper, and it also helps to target their potential customers,” adds Savi.

Ultimately, it’s still great content that breaks through the noise. As micro-influencers saturate Weibo and WeChat, those with a distinct personality or point of view are more likely to be discovered.

Social media marketing is special in China because it serves not only as a way of generating profit for brands, but also a way to educate and inspire people about fashion. It is necessary now for both brands and bloggers to think one step forward when curating content on these platforms. 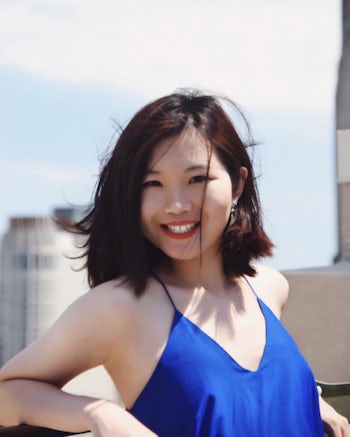 Hanzi Shen is a student at the University of Illinois at Urbana-Champaign.

It’s 2017 and the fashion industry is changing faster than ever. It’s important that we have a platform where the opinions of the next generation could be heard by the fashion community. The Future VOICES programme offers exactly that, and this could be a valuable incubator for new ideas that can impact the global fashion community. I’m glad to have the opportunity to become part of this disruption.

Special thanks to my editorial mentor Tianwei Zhang, who provided me with guidance and confidence to articulate my thoughts on this topic. I hope this article can build a bridge between brands and Chinese fashion influencers. A personal highlight of my writing process has been talking to some established Chinese opinion leaders in fashion. This topic has always been something I’m really curious about, and being able to communicate my thoughts and opinions here has been a remarkable experience during my last year in college.