From the French Revolution’s tricolour cockades to the all-black outfits worn for the 2018 Golden Globes, the history of change is filled with clothes. Will the international fashion weeks take part?

From the French Revolution’s tricolour cockades to the all-black outfits worn for the 2018 Golden Globes, the history of change is filled with clothes. Will the international fashion weeks take part?

Protest dressing is rising and rarely has there been a time when so much is being protested. Sexual harassment, racism, gender inequality, workplace injustice, environmental degradation and — of course — politics are all out there on the table, with voices of every persuasion being heard louder than ever. So, as the 2018 red carpet awards season enters full swing, kicked off by last week’s Golden Globes, it was never a question of whether Hollywood would enter the fray, but what form its action would take.

In early October, the first of a new wave of accusations against movie producer Harvey Weinstein went public. As the number of claims against him grew, loose bricks began appearing in a wall that had previously prevented the voicing of power imbalance and sexual behaviour grievances, not only in the film industry, but also across all industries.

Almost immediately, the chatter was frothing about what form of protest Hollywood could embrace, with the film industry seemingly submerged by continuing tales of sexual harassment. A month later, a decision was made by more than 300 powerful female figures including actors Meryl Streep, Reese Witherspoon and Natalie Portman, agents and studio heads to encourage a black dress code at the Globes to express their solidarity with sexual misconduct victims and promote a united desire to fight for a changed culture.

Hollywood stylist Arianne Phillips, who was one of the early participators in the Time’s Up initiative told me: “After all the shocking and horrible behaviour, some women in the industry got together and thought we have to do something. What can Hollywood do to help systemic change? It’s not enough to have a few hashtags.”

The parade of black worn by the attendees was simply the icing on the cake; the decorative signalling of an initiative that has seen the launch of the Time’s Up Legal Defense Fund, seeded by Hollywood money to the tune of 13 million dollars and attracting more than 16,000 donations. The fund provides subsidised support to anyone who has experienced sexual harassment, assault or abuse in the workplace. This is doing something.

The black dress code was seen as an easily accessible and unifying colour, not only for the Globe attendees, but also for anyone who wanted to join in through pop-up groups or their own parties that evening. Black was intended as the colour of collaboration rather than one of mourning. The ceremony aimed to be one of community rather than competition. (Some cynical observers have said that the black dresses led to a far more stylish red carpet than the more usual millefeuille of sparkling pastel princess dresses, but others would argue that much of the fun of poring over who-wore-what on the night was diminished by more austere outfits.)

There is no question that the intentions behind using the dress code to message were heartfelt and honourable. As Phillips put it, “fashion is a reflection of our culture, so what could be more relevant, being part of a positive movement?” But walking the tightrope of using the traditional star vehicle of high-fashion photo opportunities to raise the profile of serious issues is never going to be a simple operation. Gowns with grit can be seen as tokenistic and insensitive. The constellation of loaned diamonds (displayed to even greater effect against the black) could be accused of Marie Antoinette overtones, while photographs of the pouting lips of the female cast of “Big Little Lies” kissing their numerous awards will surely strike many as incongruous. How many men agreed to do a group kiss as a photo op? How many men were even asked?

And crucially, the question of how to hand on the conversational baton, throughout not only this award season but into the future, is laced with pitfalls. Award ceremonies are not simply about rewarding talent. They are also about entertainment and fame. They are about network viewing figures and unique views. They are hugely in hock to the choice of gowns, the jewels, the hairdos and the plus-ones. Guillermo del Toro, who won best film director at the Globes for "The Shape of Water," will have only received a millimetre of coverage compared to the black dress movement. The deserving best actress Frances McDormand for “Three Billboards Outside Ebbing, Missouri” received nowhere near the same recognition as the Time’s Up logo. And the highly lucrative and influential-for-all-concerned product endorsement that has become a pillar of the awards season — and which all but disappeared from this year’s Golden Globes — is unlikely to remain that way. As I write, the consensus from industry insiders is that at the next awards, it will be up to individuals to decide how they want to proceed rather than any group initiative.

The fashion houses and stylists had about five weeks to work around the black dress code; for many, this would have involved scrapping hours of manpower already employed. However, Phillips stressed that despite brands losing out on much of the name-checking that was deemed inappropriate when walking a red carpet hand-in-hand with an activist, such as Monica Ramirez, co-founder of the Alianza Nacional de Campesinas, a female farmworkers organisation in the US that wrote an early letter of solidarity to the Hollywood community, or #MeToo and Just Be Inc. founder Tarana Burke, she heard no complaints about this. “Personally, I wasn’t party to any negativity. This is about being linked not ranked. The fashion industry, as we know, has its own share of abuse, so what better way for them to show unity and join hands? People were thrilled to be able to take action.” 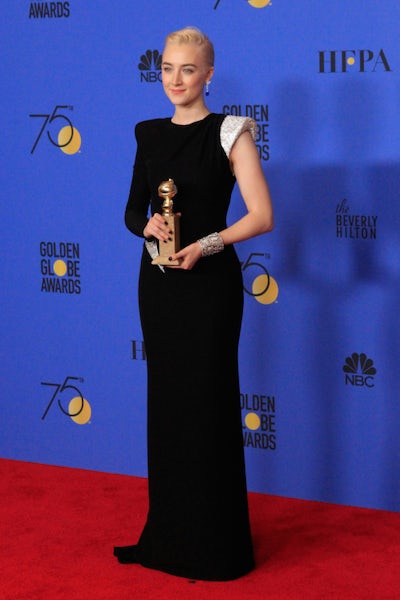 It is a view backed by celebrity stylist Elizabeth Saltzman, who dressed Lady Bird’s Saoirse Ronan in a lean black Versace sheath. “I think every designer was proud to be a part of it,” Saltzman said, adding that there is a planned auction of the dresses worn on the night to raise funds, which will also allow the work of the fashion houses another moment in the spotlight. Fashion, she believes, has every right to be part of activism. “I look at countries where you are not allowed to wear fashion and I think: why can’t we, as free countries, use fashion to say what we want to say?”

The success of using clothing to harness the incredibly effective “oxygen of publicity” comes down to how it is handled. Very little is more visible to the human eye than what a person wears and whether modes of dress are used to signify communal identity — for example, the wearing of the French Revolution’s tricolour cockades; the Rasta’s signature red, yellow and green colours; the moment suffragists (the non-violent sisters of the suffragettes) dared to shorten their hems and expose their ankles in order to message their intention; or collaborative outrage such as the “Pussy Power” hats worn by marchers and volunteers at the Women’s March last year — the history of change is filled with clothes.

Phillips suggests that the work achieved at the Golden Globes should continue not only through the awards season, but also into the international fashion weeks. She noted, too, that the Time’s Up Defense Fund was a way that the fashion industry could meaningfully contribute to the movement and called out Calvin Klein for its “very significant donation.”

Certainly, using the glamour, aspiration and image-making talents of the fashion and film industry to draw attention to promoting equality is an ambition worth holding. Success will partly be due to preventing message-overload, compassion fatigue and accusations of easy one-click activism. In this social media-obsessed, short attention span world, there is a danger of the clothes becoming the story and overshadowing the message. It’s one thing to talk about or dress for change, it’s quite another to get into long-term action away from the febrile moments on the red carpet and catwalk. Over the next few months we will see how skilfully this is navigated.

Alexandra Shulman is an author and the former editor of British Vogue.