Phyllis Posnick: Mistress of the 'Stopper'

Phyllis Posnick's visually-arresting images have defined her three-decade career. As her archive of work is compiled in a book, the stylist talks to Tim Blanks about her years at Vogue and working with Irving Penn.

NEW YORK, United States — Alexander Liberman, Conde Nast’s legendary editorial director, called them “stoppers,” images that were so visually arresting they would stop you from turning the page.

In her three decades as a fashion editor at Vogue, Phyllis Posnick has proved herself a mistress of the stopper. So what else was she going to call the lush new volume that collects some of her best — and most notorious — work?

Her supporting cast includes Irving Penn, Helmut Newton, Bruce Weber, Mario Testino and Steven Klein, but it’s Posnick’s name on the marquee and that supports the notion that, even as seesawing financials imply people are less and less engaged by actually buying fashion, enquiring minds can’t get enough of books that celebrate its creative processes. That means all of them, something the rash of shiny tomes devoted to the work of the behind-the-scenesters — not just photographers and editors, but stylists, hairdressers, makeup artists, even show producers — confirms. It’s hard to imagine "Stoppers" existing at any other time. Stylists toiled in anonymity until Anna Wintour arrived at Vogue in 1988, a year after Posnick. She began to include the stylist in credits, and that acknowledgement seeded a new kind of name recognition in fashion. However uncomfortable Posnick — quiet, intense, habitually black-clad — may be with the idea, it’s she who is the umbrella for a unique group of images, including photos by Penn and Newton, that Phillips is auctioning in London on November 3rd. 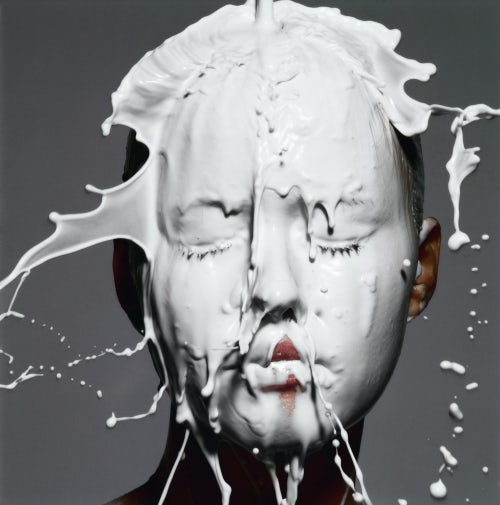 Posnick’s responsibility at Vogue has been the health and beauty pages, more often than not single images which elaborate on a theme. For years, until his death in 2009, it was usually Penn who made these pictures. They were astonishing, surreal: a bee crawls across lips to illustrate a story about collagen; more lips, this time goo-smeared, licked by a lascivious pink tongue, accompany a story about chocolate; faces are masked by surreal collages of animal, vegetable and mineral, Archimboldo revisited for the 21st century. For nearly 30 years, Posnick worked with the photographer on all of these, along with his portraits and fashion sittings. “He taught me so much I don’t know where to start,” she says now. She did over 400 pictures with Penn. Stoppers is dedicated to him.

As big and glamorous as the book is, Posnick’s insights into her collaborations loan it an insider’s intimacy. The pictures are stoppers, the words are pageturners. Unsurprisingly, her relationship with Penn is the pivot. Growing up on Long Island, Posnick’s head was full of the pictures she saw in magazines, Penn travelling to Peru, Avedon in China, a whole wide world she could only dream about. She was gifted with a knack for numbers, and her parents wanted her to be a teacher. So Posnick dutifully ended up graduating with a degree in business education from Syracuse University. But all she wanted was to work for Vogue.

Following that dream to Conde Nast, she ended up as secretary to redoubtable editrix Diana Vreeland, an instructive but not altogether pleasurable experience.

Posnick first crossed paths with Penn when she assisted on a marathon couture shoot: two weeks, racks and racks of accessories. She was packing them all up at the end of the job when Penn himself came, sat down and watched her at work. “When I’d finished, he said, ‘Where did you come from?’,” she remembers. “Which could have meant anything.” It would be years from that cryptic encounter before she found herself working at his right hand as trusted stylist and sounding board, but still… Vogue magazine! Irving Penn! Dreams do come true.

If I have one picture in the magazine, it has to be strong enough that someone’s going to stop and look at it.

“One of the many things I learned from Penn was to try to go beyond the subject matter,” says Posnick. “To not be so literal.” Their work together offered ample testimony (for more examples, see Extreme Beauty in Vogue), but the same advice infuses her collaborations with most of the imagemakers in Stoppers. One of the most memorable examples comes from Posnick’s other great photographic mentor, Helmut Newton. (“He taught me to be prepared, because he shot really quickly,” she says.) in 2003, Newton visualised a beauty story about knee-care — counteracting the everyday things women do on and to their knees — with a picture of a woman in fetishistic underpinnings, a Newton signature, mopping blood off the floor of a bathroom that was clearly a crime scene.

Tell her that the image is disturbing and Posnick looks profoundly gratified, although she prefers the word “provocative”. She says, “If I have one picture in the magazine, it has to be strong enough that someone’s going to stop and look at it.” The desire to provoke is something she shared with Newton, but there have also been more prosaic influences at work in the peculiarly subversive images Posnick has helped shape. “Fashion evolves every six months but with beauty, you have eye problems, skin problems, neck problems, you’re dealing with the same things. Either a product gives you something to grab onto, or you have to make it up.” Besides, she adds, “Vogue always did unusual beauty pictures. Anna is not interested in conventional beauty images. Even the pictures Patrick [Demarchelier] does. They’re very lovely, but they’re not just about hair and makeup.” 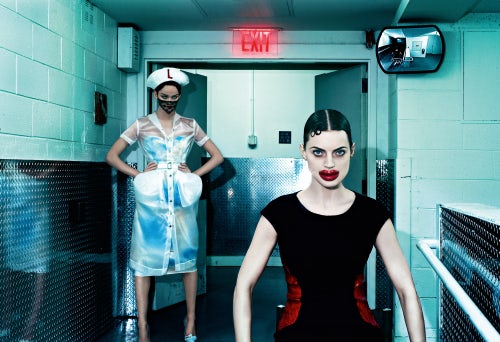 In light of which, Wintour must be thrilled with the shoots Posnick does with Steven Klein who, on the evidence of the pages he takes up in Stoppers, seems to have assumed Penn’s position as collaborator-in-chief. If you’re wondering why Wintour calls Posnick “the creative offspring of Lee Miller and Luis Buñuel” in her foreword, flick forward a few pages to Klein’s portfolio and you’ll come across grotesque images which match Miller’s graphic photojournalism with Buñuel's surreal black comedy. “They’re what’s happening in the world,” says Posnick of Klein’s beauty pictures. “They reflect advances in technology, different attitudes to plastic surgery and body modification. The photos of women without faces illustrated an article about women in certain cities all starting to look the same because they’re all going to the same doctors, getting the same filler.” In the picture which accompanied a 2008 piece about cosmetic surgery gone wrong, model Guinevere van Seenus has a huge red trout pout, the overdone extension of those about-to-be-beestung lips that Penn had photographed more than a decade earlier. “Her lips were wax, the kind that kids play with. I was obsessed with them. I had them sitting in my drawer for a couple of years just waiting for the right moment.”

That brings us round to exactly what it is that Posnick does in her collaborations. “Photographers come to any magazine with a preconceived idea of what they can do,” she says. “They know Anna likes this, but she doesn’t like that. It’s all in their heads, and it’s in my head too. So what I try to do is remove all the inhibitions, mine and theirs, and see what happens. I try to give them the freedom to do something they wouldn’t normally do, because they’re not doing a fashion picture. The opposite, in fact. Almost every picture in the book except for the portraits was to illustrate an article, so we were solving a problem.”

Her lips were wax, the kind that kids play with ... I had them sitting in my drawer for a couple of years just waiting for the right moment.

On a practical level, problem-solving for Posnick involves the obvious: scouting locations, casting models. On another, there are the almost talismanic things she brings to a shoot. Could be red wax lips, or, in one of the images that truly stops you in Stoppers, a chastity belt from the Renaissance, photographed by Penn to illustrate a story about contraception (go beyond the subject matter, remember?) and laboriously tracked down by Posnick to a “creepy” collector of fetish objects in Manhattan’s Meatpacking District. Wintour waited two months to run the picture. “Because Penn demanded the real thing,” Posnick says. “And that’s my struggle with digital. That was a real chastity belt. If it’s a croissant, it has to come from Paris. It has to be authentic. You can’t always do that anymore.” There is the vaguest suggestion there that at one time, when “budget constraint” was not a term you would have heard in the halls of Conde Nast, an authentic French croissant might actually have made the transatlantic crossing to grace a Vogue shoot. 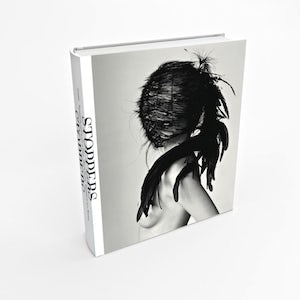 Steven Klein calls Posnick “relentless in pursuing an idea”. One of the guilty pleasures of Stoppers is unpicking the way the other photographers in the book delicately try to convey the intensity and the challenges of their work experience with her. “I want to ask her sometimes, ‘Phyllis, does it always have to be so difficult?’,” writes Bruce Weber. “I’m blunt, it’s like Tourette’s sometimes,” she concedes. “But the way I am now is to some degree the result of my relationships with Penn and Helmut. They were so in your face when they didn’t like something. Saying what you think cuts out out a lot of time wasted being indirect. I think people respond to it too if I say something to a photographer. They can say something back, they don’t have to be polite and worry about the editor. There’s an openness. Besides, if you don’t have something to fight against, you’re alone on a shoot. I don’t want a photographer who does what I ask, and a photographer doesn’t want to have all that responsibility.”

There’s more than enough visual evidence in Stoppers to support the theory that conflict is the essence of drama. But ultimately, the conflict is not photographer vs stylist. They share a common enemy — banality. Posnick worries. “We’re in the middle of a huge change and we don’t know where it’s going.” She wonders if some of the pictures in her book, with their gleeful perversity, their surreal provocation, would pass muster if they were offered now, in these increasingly thin-skinned times. So think of Stoppers as a milestone, a visual record of what’s been. But maybe it’s also a way station. Posnick and I contemplate a Klein image of a half-naked Caroline Trentini, shivering in a massive meat locker hung with bloody carcasses. The story? Skin protection in winter. But it’s more Francis Bacon than beauty shoot. Posnick has no qualms whatsoever. “If I have the subject matter that generates an idea like that, I would still do it.”