Robbie Myers Breaks Down the DNA of Elle

The editor-in-chief of Elle US reflects on 15 years at the helm of the title, what makes a strong magazine and the rise of fashion as the fourth pillar of popular culture.

NEW YORK, United States — Roberta “Robbie” Myers’ hair is down. This is unusual as the editor-in-chief of Elle US, who celebrates her 15th anniversary in the role this October, rarely strays from a tight sartorial signature, consistently dressing in black with her hair in a loose up-do. Very French, one might say. Which seems fitting, given that half of Myers' career has been at a magazine with Parisian roots.

"In Paris, of course a cultured person would know about fashion and architecture and politics, and be up on who the public intellectuals were and what they were fighting about,” says Myers, explaining the vision behind Elle US. She is sitting in a conference room at the magazine’s offices on the 24th floor of the Hearst Tower, Elle’s home since January 2012, after the American publishing corporation made a successful bid to buy Lagardère SCA's international magazine portfolio in 2011. In the deal, Hearst acquired nearly 100 magazines for almost $900 million, including the American edition of Elle, which was part of the now-defunct Hachette Filipacchi Media US. (The French publication remains in Lagardère’s hands.)

But while Myers’ Elle is no longer French-owned, it continues to possess a certain je ne sais quoi, sharing no small amount of DNA with its Parisian counterpart. On October 6, the two publications will join together in Paris to celebrate their respective birthdays — Elle US turns 30 this year, while Elle France is 70 — at the residence of US Ambassador to France Jane Hartley. “That's 100 years of an idea that I love and embrace, which is the mission of opening women's appetites,” says Myers. “Great mission — and that was not written by me. It was written by Hélène Lazareff, who was the founding editor of Elle in post-war Paris. So it's about our French-American heritage, if you will. But, also, that now there are 46 [international] editions of Elle around the world, and we were the first one launched. We're also the biggest.”

That's 100 years of an idea that I love and embrace, which is the mission of opening women's appetites.

A graduate of Colorado State University, Myers began her career in journalism in the mid-1980s, around the time Elle entered the US market. Her first job was at Rolling Stone, when the seminal rock magazine was still settling into its New York headquarters, having been relocated from San Francisco in 1977. “It was a very interesting culture clash,” she says, recalling the magazine’s first stories on U2 and Madonna. “The excitement around ideas and the people making the culture was tremendous. But it was really about a commitment to the truth. It was very much about holding up a mirror to our institutions, and taking youth culture and popular culture seriously as a form of expression, political and otherwise. It was absolutely singular in its voice and mission. I left there all fired up. You absorb the ethos of where you're working.”

Myers' next stop was Interview magazine. “I got to work on a Robert Mapplethorpe shoot, and I worked with the photographer Christopher Makos. He was shooting the downtown party scene, the cool people,” she recalls. Heady as those experiences might have been, Myers departed Interview for Careers, a cheery publication targeting high school and college students. There, she was named editor and her salary doubled. “Every person I worked with at Interview was mortified. They said, ‘You are not going to be able to get in anywhere.’ But I was the editor and 25 or something,” she says. 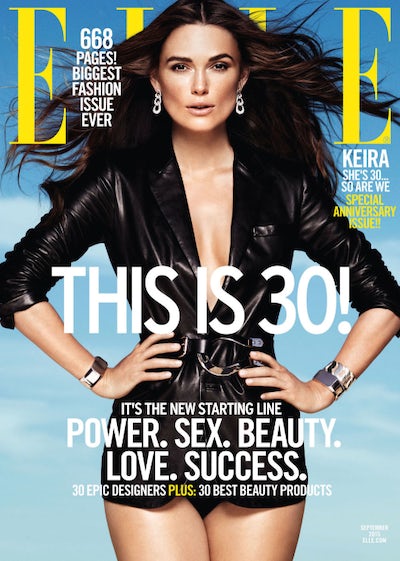 In less than a year, however, Myers took another job, this time as an editor at Seventeen, where she moved up the ranks, becoming features editor, then managing editor. “It’s a really hard job and it's really challenging,” she says. “I remember a guy sitting across from me at my desk and he says, with a totally straight face, ‘Roberta, the number one reason for paper jams in your copier is human error. That's the number one reason.’ And I think, ‘Is this my job? Is this what I do now?’ But you know what? Like with any job, you just keep your mind open and open your heart and then you learn things and meet all kinds of interesting people. You learn the business.”

It was then that Myers was recruited by Hachette Filipacchi Media US to run Tell, a magazine created in partnership with NBC to help promote the network’s teen series, including the Fresh Prince of Bel Air and Saved by the Bell. From there, she went to InStyle and, then, soon after, to Elle, where she was a features editor. In 1998, she was made editor of Mirabella, a women's magazine also owned by Hachette Filipacchi. “It was a magazine that never lost a reader, [although] there was enormous pressure to go younger,” she says. “The advertisers never really supported it, but it was a place where we published a never-before-seen Jackson Pollock. Do you know how much press we got? Zero. There was no apparatus set up. But we did all kinds of really great and fun, ambitious things. The women who read it were emotionally attached to it because it treated them with an enormous amount of respect. I hope that I bring some of this to Elle. We assumed a certain amount of cultural literacy and erudition. We handled complex issues in an elevated way.”

Mirabella folded in 2000 and Myers was promptly made editor-in-chief of Elle. She brought along her longtime colleague — and current features director — Laurie Abraham. And given that Mirabella and Elle had shared an office, Myers had already forged a friendly working relationship with then international creative director Gilles Bensimon, as well as Anne Slowey, the magazine’s fashion news director.

Myers and Carol Smith, who joined Elle US as publisher in 2002, were a good team, turning the magazine’s then-declining advertising sales into six consecutive years of growth. Part of what drove results was their decision to participate in reality television series Project Runway, which debuted in 2004. But it was also Myers’ approach to journalism. “We did practical things to shore up the business, but we also brought real reporting and writing to beauty, and we hired some great voices,” she says. “Elle always had good writers, but we really tried to showcase people.”

It was movies, television and music. Now, fashion is the fourth pillar of popular culture.

Amongst large women's titles in the US, Elle is known for bringing intellectual rigour to the topics it covers, from reproductive rights to fashion. “If there’s anything that I learned from French Elle it's that the magazine should be about all the things that a cultured woman would want to talk about, and would be interested to know about. Of course, cultured women wanted to know about fashion,” she says. “We have one of the biggest fashion wells out there, in terms of the pages and resources that we dedicate to full-page, full-bleed fashion pictures. I think that our readers want something that's lush and beautiful, something that is aspirational, and that's a word that's really tossed around a lot. But what that means is, they see themselves in it in some way.”

Looking back, it's safe to say that in her 15 years editing Elle, Myers has seen something of a sea change in the way consumers relate to fashion. “It was movies, television and music. Now, fashion is the fourth pillar of popular culture,” she says. "Musicians and designers both comment on the culture. Fashion is a conversation and it’s performative in some aspects. You can sing in your shower, and you get dressed every day.”

Elle US's September issue, which featured Keira Knightley on four unique covers — a collaboration with recently appointed creative director Alex Gonzalez — had the most ad pages of any issue in the history of Hearst magazines, according to the company, (which no longer reveals precise metrics on advertising sales for any of its titles). “You know, I find the business side of what we do so compelling and interesting. We puzzle out stuff together, which is great,” says Myers on her partnership with current publisher and chief revenue officer Kevin O’Malley. “I think advertisers respond to our mix.”