BoF columnist Bandana Tewari speaks to 28 year-old actor Sonam Kapoor — daughter of legendary Bollywood actor Anil Kapoor and a member of the recently launched BoF 500 — about the power of entertainment and Bollywood’s unique ability to move the Indian fashion market.

MUMBAI, India — “There are only two religions in India: cricket and Bollywood,” says Sonam Kapoor, the 28 year-old actor who is the current cynosure of India’s fashion world. In this land — where cricketers metamorphose into movie stars, movie stars turn into owners of multi-million dollar cricket clubs, and both industries have been known to give rise to powerful politicians — entertainment is power. And there is perhaps no better representative of a young generation of powerful movie stars than Sonam Kapoor.

For India’s fast-growing middle classes, aspirations for wealth, class and style flow unmistakably from the screens to the streets.

In India, editors actively jostle to tap a handful of Bollywood stars whose mass popularity directly impacts sales and it’s not unusual for Kapoor to grace four magazine covers in a single month: Vogue, GQ, Elle, Harper’s Bazaar, you name it. Indeed, with just ten films under her belt, including this year’s runaway hits Raanjhanaa and Bhag Milkha Bhag, which grossed more than 100 crore rupees (about $16 million dollars) each, Sonam Kapoor, daughter of legendary Bollywood actor Anil Kapoor, of Slumdog Millionaire fame, is quickly becoming India’s national sweetheart, propelled by her chiseled face, unabashed laughter and a spirit that endears rather than alienates. 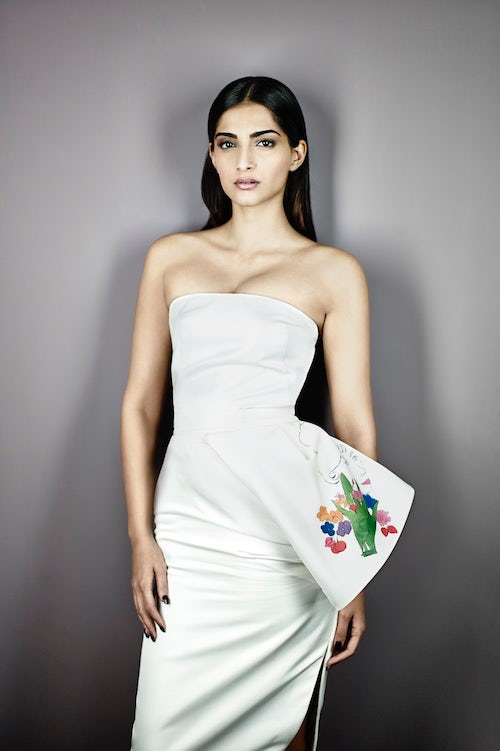 Bollywood is the world’s most prolific filmmaking industry, churning out more than 1000 films each year, with annual revenues in excess of $3 billion, according to a report published by International Business Development India. By comparison, Hollywood makes about half as many films annually. And while filmmaking budgets in India are smaller than those in Hollywood and ticket prices are much lower, Bollywood reaches a larger global audience, attracting avid followers amongst the 22 million-strong Indian diaspora in the United States, Canada and the United Kingdom, as well as sizable international audiences in the Middle East, Korea, Japan, Russia and beyond. In 2009, Bollywood films generated worldwide sales of about 3.6 billion tickets, compared with 2.6 billion tickets for Hollywood movies.

A handful of big Bollywood stars are in such high demand that they sometimes work on up to five mega-budget films at a time. Top male stars can make up to $16 million per film, while fees for women, like Kapoor, top out at around $1.5 million. But the big money is made off screen. For India’s fast-growing middle classes, aspirations for wealth, class and style flow unmistakably from the screens to the streets and Bollywood stars have become powerful marketing vehicles for everything from toothpaste to soft drinks.

It’s in the world of fashion that Sonam Kapoor wields maximum power. The trends she wears in her films spread like wildfire, especially during wedding season when every bride wants to look like their favourite film star. Kapoor is also asked to walk the runway for top Indian designers and receives invitations to sit in the front row at the shows of top international luxury brands like Chanel, Dior, Louis Vuitton, Burberry and Dolce & Gabbana.

Her journey to fashion prominence first began with a debut on the red carpet at Cannes where, in 2011, she was one of the global faces of L’Oréal. “My sister Rhea, who was styling me, sent emails to many international designers. There were a lot of designers who didn’t know me and we didn’t hear from them at all. But to my delight, Jean Paul Gaultier responded and sent an archival couture piece,” she recalls. “Gaultier took a chance on me and somehow, in a strange way, I feel his dress pushed me into the limelight. I got great reviews that year. The next year I wore Alexander McQueen.”

While Kapoor is a mass-market phenomenon, catering to the tastes of a billion people — she played the girl-next-door in Raanjhanaa and an apparition of idealised Indian beauty in Sawariya, a chest-thumping love-saga of epic proportions — she is also a global luxury fashion force in-the-making. In the movie Aisha, her character toggles between outfits by Chanel and Dior. Lady Dior, a handbag first popularised by Diana, Princess of Wales, became a household name in India when Kapoor flaunted it with great aplomb as the modern-day-Jane Austen heroine Emma.

“I was told the sales of Lady Dior went up exponentially,” she reports. “You know, being honest about what you love pays off. I don’t look at clothes as just clothes; I consider them as art, as well. And because I have such respect for fashion, I keep it real. I don’t think I’m bigger than fashion; I think fashion is bigger than me.” 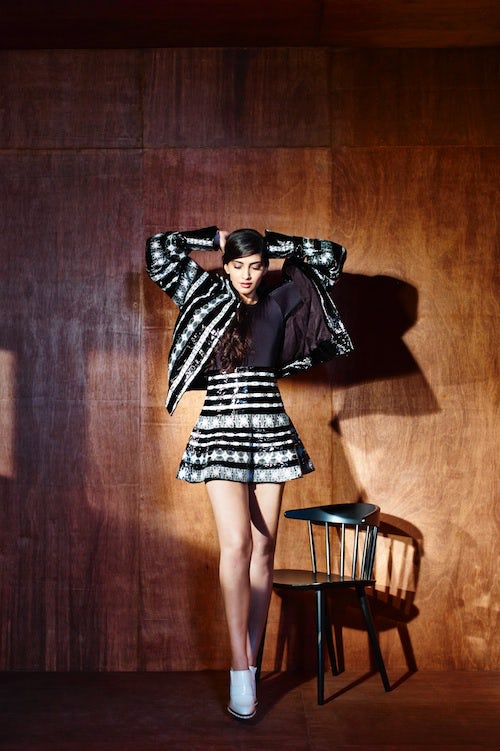 International designers love her global panache, which sits calmly with her exotic Indianness. She is also svelte enough to slip into challenging silhouettes. Earlier this year, she wore a dramatic Dolce & Gabbana gown to the Cannes International Film Festival.

“I have a great relationship with the brand. I was smitten by their first Alta Moda collection, so they crafted [a piece] specifically for me. It was hand-painted and I had three fittings.”

Designers Domenico Dolce and Stefano Gabbana were delighted. “Sonam Kapoor for us represents the epitome of the Golden Era of Hollywood thanks to her natural elegance, her femininity and class,” the duo said in the press.

“I don’t know how influential I am. But I think people can see that I don’t walk the beaten path. I am not that girl who thrives in those short, tight, bandage dresses,” says Kapoor, referring to the uniform worn by many of Mumbai’s socialites. “I would feel terribly uncomfortable in them. I have a real girl’s body and I certainly don’t look like a Barbie doll. Most of all, I don’t want to be a clone. I love being myself. I think my fans like that.”

But her commercial power is undeniable. Top Indian fashion shows usually end with a Bollywood “showstopper,” who traditionally accompanies the designer as he or she takes a bow at the end of the presentation. At a recent bridal fashion show staged by superstar Indian designer Rohit Bal, the elaborate wedding lengha worn by Kapoor was sold, on the spot, 25 times over.

“I am left a little gob-smacked when I hear this,” she says. But in recent years, the actress has been extending her influence via social media. Indeed, Kapoor has attracted more than 5 million followers across Twitter, Instagram and Facebook, making her India’s most influential social media persona. “I interact with them myself. I love being on Twitter and I am obsessed with Instagraming,” she says. “But if I am exerting so much influence on our youth, I need to be more cautious.”

Alongside her Twitter quips, sprinkled with hashtags and LOLs, she hasn’t hesitated to stick out her neck. In 2011, she lashed out at popular yoga teacher and political activist Baba Ramdev, who made front-page news when he ranted about a “cure” for homosexuality and expressed his disdain for actresses because of their supposed promiscuity. “Sexist homophobe,” she tweeted, undeterred by the backlash from his many fans. “Followers of Ramdev were up in arms against me. But I refuse to be bullied into silence. Sure I can talk about nail polish and hair-dos. But I am also an opinion-maker and a concerned citizen; so I will have opinions about social issues that plague my country,” she says.

It’s no easy feat straddling the two most challenging vectors of any developing nation: mass and class. But Sonam Kapoor seems to be enjoying the ride. And beneath the fashion brouhaha, she is still acutely aware of the fact that the key to her popularity lies in Bollywood box-office numbers.

“The exposure I get allows me to have this influence in fashion. But if I wasn’t taken seriously as a film actor, no one would have taken me seriously in any other field. After all, there are a lot of girls who dress beautifully and dress better than me. So I must continue to take my work seriously, so people take me seriously. But I want to be a real girl and not be afraid of choosing things that are little off-kilter. Even a peacock has ugly feet, you know.”

A version of this article first appeared in a special print edition of The Business of Fashion, published to accompany the launch of the BoF 500. To get your copy, click here or visit Colette (Paris), Opening Ceremony (New York, London and Los Angeles), Le Mill (Mumbai) or Sneakerboy (Melbourne).