The designer talks to BoF’s Tim Blanks on the occasion of his retrospective-meets-reckoning ‘Subhuman Inhuman Superhuman.’ 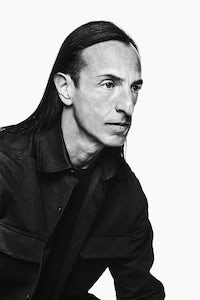 The designer talks to BoF’s Tim Blanks on the occasion of his retrospective-meets-reckoning ‘Subhuman Inhuman Superhuman.’

MILAN, Italy — Last week was Rick Owens Week in the global fashion media. His first-ever retrospective — highlighting the full range of his creativity, from clothes and accessories to furniture design and visual records of the often extraordinary performance pieces that pass for fashion shows in his multiverse — opened at the Triennale in Milan, where it will be on display until March 25.

Owens says he’d probably have felt more emotional about the exhibition if it hadn’t been shoe-horned into his annual four-show schedule. “It felt familiar, like another show.” Then he had to talk about it with the press, and he could hear his voice in his ear, saying the same thing over and over. “The more I talk about it, the more redundant I sound.”

So, a few days later, he’s hoping the passage of time will eventually bring a little more objectivity and restore the sense of significance that such a way station deserves. A retrospective does, after all, conjure up a reckoning of a life. “I love that word ‘reckoning’,” Rick purrs. “I love how biblical it sounds.” And God really is in the details of the Owens story. His middle name, for instance. Saturnino! “I know, can you believe it?” he marvels. “It was one of the most exotic things my father ever did. It’s kind of funny because he was so cerebral and empirical, but he was very into astrology. Saturnino was my great-grandfather’s middle name on my mother’s side, and my father liked it because he said Saturn was important in my house.” As far as that goes, Owens insists he knows nothing about astrology, but he is, for the record, a Scorpio. A saturnine Scorpio, to boot. “I can see how a saturnine quality would work as a description for me,” he adds with a dry chuckle. “Dad programmed me!” 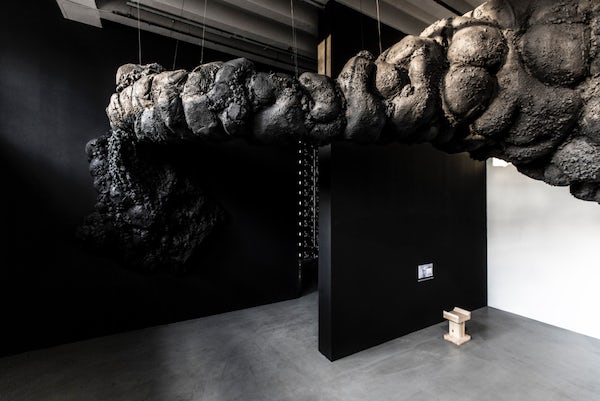 The retrospective is called Subhuman Inhuman Superhuman. Is this the Owens equivalent of Titian’s “Three Ages of Man”? “No, it’s more about something we all have in common. Primal urges, controlled urges and delusional motivations. They’re things I examine in myself. I’m always talking about my flaws: the flaws I forgive myself for, the flaws I used to punish myself for, flaws I can’t take too seriously anymore. It’s my journey but everyone goes through the same process of figuring out who they are. I thought Subhuman Inhuman Superhuman was a wonderfully robotic, clinical phrase that refers to the messy emotions everyone is trying to negotiate. I love how creepy it sounds.”

It’s got a strident note of Nietzsche about it too. “Yes, yes, yes,” Owens enthusiastically agrees. “It strikes a nice chord.”

Which reminds me, in a free associative way, of something Gore Vidal once wrote about the US’s march from barbarism to decadence, bypassing civilisation along the way. In the show at the Triennale, stunningly elegant, refined, serene pieces of clothing share space with Owens’ monumental, brutalist furniture designs. And snaking through the whole exhibition is a massive, crude, earthworm-y shape, like a strand of vomitous plasma, which Owens calls his “primal howl,” almost an exorcism of all those flaws he was talking about. If this isn’t a screaming match — or a heated conversation — between barbarism and decadence, then it is at least a study in extremes the likes of which has seldom ever been seen in fashion.

Primal urges, controlled urges and delusional motivations. They’re things I examine in myself.

“I’m always aiming for a serenity as a Utopian ideal,” Owens explains, in the seductive, measured drawl with which he typically expresses his darkest, most convoluted thoughts. “It’s the next level, but I’m never going to get to it. To get there is messy, it takes a certain amount of ferocity and drive. I think about my ego a lot. Why am I so determined that what I have to say is of such value that I must insist people listen to it? It takes an unpleasant amount of ego and aggression to force yourself into a position where people will listen to you. I’m proud I was able to do that.” True, the “primal howl” is impossible to ignore, much more so than the eerily lifelike sculptures of Owens that populate his stores around the world. It makes me wonder if he feels compelled to justify his existence all the time, by placing himself so physically, so inescapably in the world he’s created. (His clothes could be said to fill the same function in fashion.)

“Not really,” he counters. “I feel a moral obligation to leave good energy behind. As long as you’re here, you gotta do your best. When I look at all those clothes and think of all that waste and how much this industry is responsible for polluting, I console myself with the fact that the world needs beauty. That’s one of our greatest gifts while we’re on earth. My job is to promote beauty and find new versions of it and present it and talk about it and enjoy it and, I suppose, provide it. Who am I to say what’s beautiful? I’m just doing these proposals but enough people seem to enjoy it that it means it has some value. And I think that’s important.” 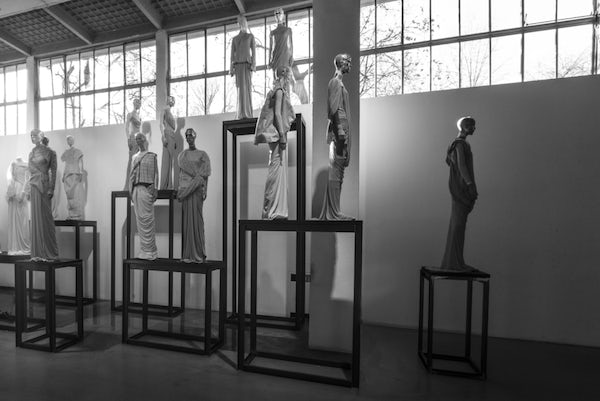 There are few people I enjoy talking to in fashion more than Rick Owens, because he is so tangibly, deliberately a work in progress, with all the contradictions that implies. For instance, he can fret about relevance, and then reflect on how much he loves the notion of being the kind of exotic obscurity whom posterity delights in uncovering (the kind of individual who renders relevance irrelevant, in other words). “I think I’m promoting really fundamental, almost provincial values,” Owens muses. “Which is good, but in the fashion industry now, there are more nuances. Relevance is a smaller window than it used to be. I love how sharp fashion is getting, how cruel and hard. Fashion is about codes that you’re flashing like gang codes, and the codes are getting more obscure. The VIP room is getting smaller, shutting down and popping up in different places that are harder to find. We’re so oversaturated with fashion that the codes have to get more complicated to be cooler.”

He insists there is a new wave in fashion creating new codes, but he won’t be drawn on who they are. “I don’t like to sound like I presume to know what they’re doing, but from my perspective, that’s the kind of impression I’m getting. Maybe I’m completely wrong. When I mention their names to other people, they say, ‘Impossible, they’re too stupid.’ But I think people have instincts. They can be idiot savants, like a bright dog. You see dogs that have a sharpness about them, a vision, a light. People are responding. I remember my dad mumbling that Madonna was poison to young people, but why do you think people responded to her? Why were they so galvanised, so captivated? If that many people are swept away with it, it must mean something. Though I don’t know what it is exactly.”

I love how sharp fashion is getting, how cruel and hard.

Owens has famously remodelled himself physically: the naturally curly hair straightened, the grey dyed crow-black, the muscles pumped and pumped again, the skin tanned. He is a walking, talking warrior fable of self-invention. But every so often when he’s riding on the Metro, he’ll see a man his age (he’s in his mid-fifties) and think, “I’d probably look exactly like that guy if I hadn’t decided I wanted to look like someone else.” And he has more in common with this fellow traveller than you might imagine, if you judged Owens purely by his looks or the libertine life that finds such fulsome expression in his retrospective. His sage distillation of those decades — “After you’ve been to all the fistfucking clubs all over the world, you end up in a walled garden with kittens and babies, because they’re the fundamental values of life that everyone identifies with,” — rings true-ish as the counsel of the kind, trustworthy uncle character he imagines himself to be in polite company. “Kindness.” That’s how he answers, without hesitation, when I ask what he’d like to be remembered for.

But he immediately qualifies his declaration. “Lurid, depraved kindness. That’s what I’m teaching the kids. And I get the feeling that’s what they’re responding to.”