At Work With Mickey Drexler

Millard “Mickey” Drexler mixes great instinct and good data to bring that special something to J.Crew.

NEW YORK, United States — Mickey Drexler’s office is like a boardroom. Or better yet: a gigantic cubicle, barely portioned off from a cluster of administrators. His desk is a massive conference table with just a handful of papers stacked next to a phone. Whiteboards occupy two corners of the room. One displays a list of ideas relating to Wallace & Barnes (a heritage collection that’s part of J.Crew’s men’s offering) and includes phrases like, “where is the puck going?” and “sweats.” The other contains a more random collection of thoughts, including a quote from writer Glenn O’Brien that reads, “Anything that fights conformity is good.” The only indication that we are in someone’s office is the array of family photos lined up on low-to-the-ground wooden shelving.

“You see this desk? At Gap, they used to wonder. A $14-billion company, and my desk was kind of like this,” says the 69-year-old Drexler, who ran the American retailer from 1983 to 2002. “I didn’t want too much clutter. What, was I going to read reports about what already happened?”

What Drexler does do is keep his finger on the pulse, calling his top employees in and out of his office any time he has a bright idea or a big concern. Call it micro-managing, sure, but it’s more like constant questioning. “The fact of the matter is, he’s a meddler,” says J.Crew’s president and executive creative director Jenna Lyons. “But one of the benefits of working for someone who has been so successful is that he doesn’t have anything to prove. He’s not fearful of anything but not being happy and enjoying what he does.”

A big part of what makes J.Crew the most compelling American retail — and dare we say it, fashion — success story of the past 10 years is Drexler’s uncanny ability to pick up on market trends and patterns incredibly quickly, consult data to back up his observations, then bring those trends to the masses. It’s perhaps the core reason he was able to transform a once-promising, long-struggling catalogue business into a powerful arbiter of taste. Indeed, the only thing Drexler seems to fear is missing out on the next big thing. And he uses his unique mix of instinct and information to figure out exactly what that is and act upon it.

A big part of what makes J.Crew a success story is Drexler’s uncanny ability to pick up on market trends and patterns incredibly quickly, consult data to back up his observations, then bring those trends to the masses.

Even early in his career, Drexler made sure nothing got past him. “At Bloomingdale’s, my nickname was ‘Stubs Drexler,’” a moniker born from the then twenty-something merchant’s habit of counting sales tags each day in the evening after the store had closed to keep track of performance. It was a manual — but real time — way of knowing what was doing well and what wasn’t. “That was my computer, you know?”

Logically, Drexler was able to use this data to better inform his future buys, but maybe not in the kind of linear way one might imagine. He tells the story of a t-shirt that arrived on the shop floor one chilly February. “The first week, it blew up. So I placed what was then the biggest unit buy in the history of Bloomingdale’s and I had to negotiate with the president of the company. I was 23 or 24 years old. I said, ‘We sold X amount in 25-degree [Fahrenheit] weather in February. If you can sell this many in February, how many will you sell in May?’ I do the same 40 years later.”

Giving context to the raw numbers is something Steve Jobs also excelled at. “I’ll never forget when [he] showed us the iPod and said, ‘How many do you think I can sell?’” recalls Drexler, a member of Apple’s board of directors since 1999. “We all guessed around the table and he said, ‘I think you’re all really wrong. Do you know how many Walkmen sold in the 1970s over a period of five years?’ I’ll never forget that. That’s exactly how you do it. You look for data that connects the dots and makes you figure out the next one.” 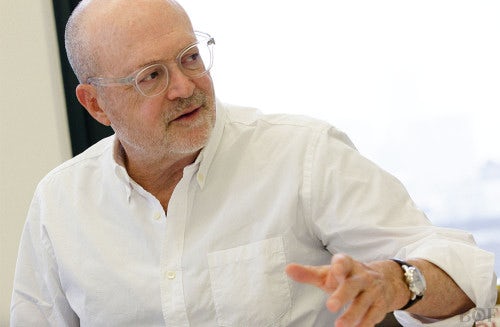 In Drexler’s world, iPods are skirts — and lately, he’s been seeing a lot of them. “I walked into the photo studio and three out of four women there were wearing skirts. And I said, ‘Wow, what’s with the skirts?’ And, then, they told me where they were from and none of them were from J.Crew, which didn’t make me happy, because they were otherwise wearing mostly J.Crew stuff.” After this revelation, Drexler hit up his sales team for data on the company’s skirt business. Turns out, it’s doing “amazing,” he says. So why weren’t those J.Crew employees wearing J.Crew skirts? His instinct was to bring in the marketing team. “I would like J.Crew to have the authority to communicate, to say, ‘It’s about skirts or it’s about sweats,’” he says. “Whatever the category is, I’d like us to communicate emotionally to consumers.” Unsurprisingly, Drexler has hired away several magazine editors, marketers and salespeople from publications including Vogue, Glamour and GQ. The circulation for the company’s Style Guide (formerly known as the, uh, catalogue) is undisclosed, but the company says it’s comparable to that of America’s largest fashion magazines (InStyle’s 2013 circulation was 1.7 million, while Vogue’s was 1.2 million).

If something doesn’t sell well — and with the number of different products J.Crew has on the sales floor at any given time, it happens — Drexler wants to figure out exactly why, and how he can change things to make it a winner. He’s also open to doing smaller runs on more rarefied pieces. Dropped samples—prototypes that are never produced — are inevitable at every level of fashion.

But Lyons says it’s not as rampant at J.Crew as it once was. “Listen, we overdevelop and we will never have room for everything, that’s just the way it goes,” she explains. “However, one of the things I think that is unique about today is, we’ll go through [products] with Mickey and say, ‘Oh there’s this selvedge wide-cuff jean, but it’s $300. We could take off the hand-seams and the sanding [to get the price down],’ and Mickey will come in and say, ‘No, no, let’s just leave it the way it is, it’s beautiful. Let’s just put it in fewer stores and charge what it should be.’” J.Crew’s limited-edition runs result in sellout items every season. They may not do as much for the company’s bottom line as its classic cashmere sweaters or Matchstick jeans, but they are an important part of the product offering that the brand has become known for.

“I remember one time, Mickey came back from a board meeting [of a large car company] where he was a guest,” recalls Lyons. “He said, ‘I’ve never been to a board meeting like that before.’ And I said, ‘What do you mean?’ He responded, ‘If I looked at the streets and what this company makes, to me the biggest problem is its products.’ Ultimately, a customer walking into a dealership wants to drive off the lot in something that looks cool. He said, ‘There was zero conversation about the product.’ Everything was about supply chain, pricing, maximising, minimising. Mickey doesn’t see it that way. He will make a decision that, at some times, may seem risky or unproven if he thinks it’s going to [resonate with] the consumer.”

Drexler’s unwavering dedication might help to explain why, in 2010, he brought in TPG Capital — which owned J.Crew before it went public in 2006 — as well as Leonard Green & Partners LP, to take it private again, for $2.86 billion. The company’s shareholders were reluctant to approve the deal; after all, Drexler had transformed a $700 million business into a $2 billion one. But J.Crew argued that sluggish same-store sales and lower-than-average stock performance meant it needed to take a moment to work out some kinks. Just three years later — with last twelve months’ sales through the third quarter of 2013 at $2.3 billion — there is talk that J.Crew will pursue an IPO again.

“I wish I had a boss like me in my early years,” Drexler says with frank delivery. “I’m not self-congratulatory. But I mean someone who had a point of view, a vision, and passionately believed in what they were doing and the direction the business should have.” In a way, Drexler is very much like a journalist — his office is his newsroom, his designers and marketers are his reporters on the field, finding what’s new, what’s good and what’s special. “One of the things I think is very paramount to Mickey’s success and his passion is he has a voracious need and love for the thrill of finding the thing that’s coming [next],” says Lyons. “It’s like an internal combustion system. He comes home early from vacation and the first thing he does is go into a store and ask what’s interesting, what’s happening.”

And much like an editor, he’s always looking for the story — or, in this case, the look — with the strongest pitch. There is one very office-like feature of Drexler’s supersized cubicle: the expansive view, which includes dozens of Manhattan skyscrapers. But Drexler is only interested in one of them: One World Trade Center. “The world is about the other 20 or 30 buildings,but then you see that one building. You notice that one thing.”

Editor’s Note: This article was revised on 30 April, 2014. Due to a transcription error, an earlier version of this article misstated that Gap Inc’s revenue in 2002 was $40 billion. It was $14 billion.