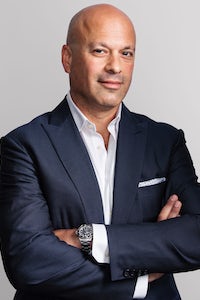 Farfetch adds David Rosenblatt to board
The Farfetch Group has appointed 1stdibs chief executive David Rosenblatt to its board of directors as a non-executive member. Before joining the luxury antiques and vintage retailer, Rosenblatt previously served as CEO at DoubleClick, a technology vendor and display advertising marketplace that was acquired by Google for $3.2 billion in 2008. The announcement comes as the e-commerce company is reportedly edging closer to an IPO, with the exit expected to take place within as little as six months.

VF Corporation names chairman
VF Corporation — whose portfolio includes Timberland, Vans and The North Face — has confirmed executive chairman and director Eric Wiseman plans to retire after 22 years with the company, effective October 28. Current president, chief executive and director Steven Rendle will succeed him, completing leadership succession plans that were set in motion in June 2015 with Rendle’s initial promotion to president and COO.

J.C. Penney hires CFO
J.C. Penney has appointed Jeffrey Davis as executive vice president and chief financial officer. The former Wal-Mart executive joins the retailer from Darden Restaurants, where he held the same title. He succeeds Andrew Drexler, who was serving as interim CFO following Edward Record’s departure from the company on July 11.

Dutch LLC rebrands, names chief brand officer
Dutch LLC — the parent company behind Joie, Equipment and Current/Elliott — has appointed Sarah Rutson as chief brand officer as the business rebrands as The Collected Group. Rutson joins the company from Net-a-Porter where she served as vice president of global buying. Prior to that, she was fashion director at Lane Crawford. In her new role she is responsible for evolving the company’s existing labels and identifying potential acquisitions to add to the portfolio as The Collected Group looks to expand globally.