This week, Kelley Carter was named home fashion director of the American department store chain, while Simon Holloway exited Agnona after five years at the brand. 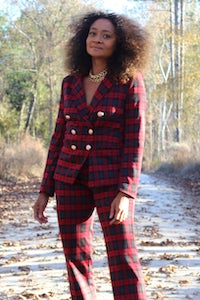 This week, Kelley Carter was named home fashion director of the American department store chain, while Simon Holloway exited Agnona after five years at the brand.

Kelley Carter, who has a background in editorial, interior styling and design and who previously held editorial roles at publications like O Magazine, O at Home, Real Simple and Refinery29, has been appointed home fashion director of Bloomingdale’s effective immediately. Carter will oversee trend forecasting and expand resources across Bloomingdale’s home department including home textiles, housewares, furniture and luggage categories. She will report to Kevin Harter, vice president of integrated marketing and fashion direction at the department store.

Simon Holloway is stepping down as creative director of luxury womenswear brand Agnona, a role he has held since 2015 after succeeding Stefano Pilati. The move follows after Ermenegildo Zegna sold a 70 percent stake in Agnona to Roberto and Stefano Aimone — the husband and son of Laura Zegna. The father and son duo, who established their namesake menswear label in 2015, will be assuming the role of Agnona's new executive president and creative director, respectively.

Bon Appétit appoints new editor in chief
Dawn Davis, who most recently served as the vice president and publisher of 37 Ink, an imprint of Simon & Schuster, has been named editor-in-chief of Bon Appétit, effective November 1. Davis, a longtime champion of underrepresented voices, will oversee the editorial strategy for Bon Appétit and Condé Nast’s food brands Epicurious, Healthyish and Basically across digital and print platforms.

TikTok Chief Executive Kevin Mayer announced that he is leaving the company after just a few short months in the role. The move follows after the global video sharing app faces ongoing disputes with the Trump administration regarding the sale of its US operations, a nationwide ban in India and potential restrictions in the UK. A successor is yet to be named.

Amazon veteran Jeff Wilke announced he will be stepping down as consumer chief executive after almost two decades at the e-commerce giant. Wilke is set to retire in the first quarter of next year and will be succeeded by Dave Clark, senior vice president of worldwide operations.

Achilles Ion Gabriel, who has served as the creative director of CamperLab (a sub-brand launched by footwear company Camper in 2015) for a year now, has been promoted to global creative director of Camper. In his new role, Ion Gabriel will oversee the design of the Spanish brand’s whole product range, including CamperLab, and is slated to debut his first collection for the brand in Autumn 2021. He succeeds Romain Kremer, who stepped down from the role in June 2019.

Web Smith, founder and editor-in-chief of 2PM Inc., has been named director of strategy and leadership at New York-based menswear brand Rowing Blazers. The company also hired Edith Young from Man Repeller, where she was associate editor, as deputy creative director. Both Smith and Young will assume their roles effective September 1 and will work closely with Co-Founders Jack Carlson and David Rosenzweig, as well as E-commerce Director Katelyn Glass.