This week, Corey Smith was named vice president of diversity and inclusion at LVMH Inc., while Jimmy Choo veteran Hannah Colman was appointed chief executive of the luxury fashion house. 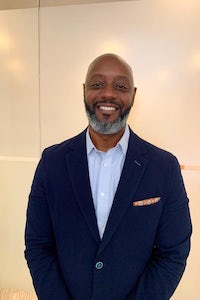 This week, Corey Smith was named vice president of diversity and inclusion at LVMH Inc., while Jimmy Choo veteran Hannah Colman was appointed chief executive of the luxury fashion house.

Corey Smith, who most recently served as head diversity and inclusion at Major League Baseball, has been appointed to a similar position at LVMH Inc. (the luxury conglomerate’s North American arm). In his new role as vice president of D&I, Smith will focus on developing the luxury group's diversity and inclusion initiatives aimed at enhancing recruitment and providing opportunities for people of colour and other diverse groups.  He will report to Gena Smith, senior vice president of human resources and head of global executive and creative recruitment at LVMH.

Hannah Colman, who has been standing in as interim chief executive at Jimmy Choo, will assume the role on a full time basis. Colman, who first joined the company in 1996 as store manager and went on to hold several other roles at the luxury fashion house, including president of EMEA and global e-commerce, will report to John D. Idol, chairman and chief executive of Capri Holdings.

Laurent Bergamo, who previously served as the general manager in the Middle East, has been promoted to chief executive of Valentino Americas, effective immediately. In his new role, Bergamo will oversee the development phase for Valentino’s retail, wholesale and online distribution channels for the US, Canada and Mexico markets. He will report to Marco Giacometti, Valentino's Chief Commercial Officer.

Paul Gaudio, who has served as Adidas’ global creative director since 2014, has left the company. The company did not comment on the reason for his departure, but it comes after he posted controversial comments on social media about a teenager involved in a fatal shooting during protests in Kenosha, Wisconsin.

Alan Boehme, who most recently served as senior vice president and chief technology innovation officer at Procter & Gamble, has been named chief technology officer at H&M. Boehme will work closely with Chief Product Officer Daniel Claesson to co-lead the new organisation Business Tech — an initiative intended to develop the business and improve consumer experience. He replaces Joel Ankarberg, who is now the head of group strategy and transformation.

Jean-Marc Bellaiche, who is currently the chief partnership and strategy officer at French global experience analytics company Contentsquare, has been named chief executive of Printemps, effective October 1. Bellaiche, who has also held senior leadership roles at Boston Consulting Group and Tiffany & Co, will oversee the growth of the company and accelerate the digital strategy of Printemps group.

Jian DeLeon, who previously served as the editorial director at Highsnobiety, has been appointed men’s fashion and editorial director at Nordstrom, effective immediately. In his new role, DeLeon will work cross-functionally across all the categories in the men’s division including active, apparel, designer and new concepts. Based in New York, DeLeon will report directly to Red Godfrey, vice president and creative director at Nordstrom.

Christopher Morency, previously the editor-at-large at Highsnobiety, has been promoted to editorial director of the media publication. Prior to joining Highsnobiety in 2018, Morency worked for The Business of Fashion covering streetwear, sportswear and luxury. He also held roles at Fantastic Man and Vice.

Jon Wexler, the General Manager of Yeezy, is exiting Adidas. Wexler first joined the company in 2000 and previously served as  the vice president of global entertainment and influencer marketing before becoming the General Manager of Yeezy — a role created in collaboration with Kanye West and Adidas in 2019. According to an internal memo as seen by WWD sister publication Footwear News, Wexler has left the sportswear giant to pursue other interests outside of the company.

David Warren, who has spent 42 years at Christie’s Jewellery and most recently served as senior international director and head of jewells Middle East, has joined  London-based diamond jeweller Moussaieff as chief executive. Warren will report to Alisa Moussaieff, head of the family-owned company.

Celebrity stylist Yun-Kee Jeong has been named the first ambassador in South Korea as part of the British Fashion Council’s new London Fashion Week ambassador scheme — aimed at supporting British fashion designers in Asia. Jeong, who is also the creative director and president of talent and communications agency InTrend, will act as the BFC’s spokesperson in the region for the next two years, helping to raise LFW’s profile.