Power Moves | Riccardo Bellini Moves to Chloé, Burberry Adds to Board of Directors

This week, Chloé taps Maison Margiela’s CEO, while Burberry appoints an Asia-based drinks executive to its board of directors. 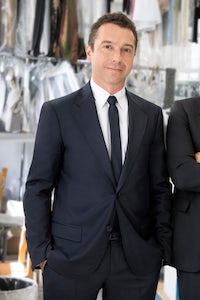 Power Moves | Riccardo Bellini Moves to Chloé, Burberry Adds to Board of Directors

This week, Chloé taps Maison Margiela’s CEO, while Burberry appoints an Asia-based drinks executive to its board of directors.

Following the news of his exit as chief executive of Maison Margiela, Riccardo Bellini has been named CEO of Chloé, effective December 1, 2019. Bellini replaces Geoffroy de la Bourdonnaye, who is stepping down November 30.

Burberry adds to board of directors

Sam Fischer, president of alcoholic drinks company Diageo for the Greater China and Asia region, has joined Burberry’s board as a non-executive director and member of the remuneration and nomination committees.

David Schulte has stepped down as president of The Row after three years in the role.

Condé Nast has appointed art collector and boutique owner Leslie Sun editor-in-chief of Vogue Taiwan. Reporting to CM Liu, managing director and publisher of Condé Nast Taiwan, Sun replaces Sky Wu, who will be retiring at the end of 2019 after a career spanning over two decades. The first issue under Sun’s editorship will be published in January 2020.

Wolford Chief Executive Axel Dreher has resigned, effective October 31, after six years at the company and two years as CEO.

The hosiery brand also announced the promotion of Silvia Azzali from global sales and merchandising director to chief commercial officer, effective November 1. Azzali, along with Chief Operations Officer Andrew Thorndike, will run the company’s management board while the search for a new CEO is underway.

Gucci Executive Vice President, Merchandising and Markets Jacopo Venturini is stepping down after four years at the company and just over 18 months in the role. Gucci President and Chief Executive Marco Bizzarri has said that Venturini’s role will be split between Matteo Giopp as chief merchandising officer and Maurizio Pisanu, global director of licensing for watches, jewellery, silk and accessories.

Jenny Fleiss, who has been Jetblack’s CEO since its inception in 2018, will assume an advisory role and report to Walmart Chief Customer Officer Janey Whiteside.

Barbour has named Nicola Brown head of womenswear, effective December 9. Brown joins the company from Hobbs, where she was head of design.