Adidas and the World Cup: Mass Appeal or Awkward Deal?

Adidas and the World Cup: Mass Appeal or Awkward Deal?

MOSCOW, Russia — Around Moscow’s glitzy and recently renovated Luzhniki football stadium, open-air markets have popped up selling an array of football-themed memorabilia, from national Russian team T-shirts to knock-off FIFA merchandise. Even at fashion retailers like Tsum and Aizel, where luxury is the order of the day, football has permeated product design with subtle nods to the sport — and not-so-subtle signs of patriotism. President Putin’s face seems to appear on more clothes than Russian footballers’.

Today marks the first day of the month-long FIFA World Cup that Russians hope will be a boon for the nation’s recovering economy and a bandage for its battered reputation on the world stage. Controversy has plagued this year’s event long before Russia started pouring 600 billion roubles ($9.6 billion) worth of investment into event-related infrastructure.

For a sponsor like Adidas — FIFA’s only official apparel partner since 1998 — the World Cup is a point of differentiation from competitors Nike and Under Armour, as well as an opportunity to boost the bottom line. But when an otherwise prestigious event becomes mired in controversy, the opportunities attached to it aren’t always as golden as they may seem.

The value of the Adidas deal has not been disclosed, but experts estimate that top-tier World Cup sponsorships sell for around $100 million per four-year cycle. With over three billion spectators predicted to tune in, brand partners can usually expect a healthy return on investment from an event that amplifies the feel-good factor for billions. This year, however, not everyone is feeling good about the event itself.

“The geopolitical situation in Russia is complicated,” said Carsten Thode, chief strategy officer at Synergy, a sports and entertainment agency. “Not only is there [Russian] involvement in certain [overseas] regimes, but there’s also an attitude towards the Western world related to involvement in elections, cyber activity, and issues with the LGBT community. These are all controversies that aren’t helpful for brands during sponsorship campaigns.”

These are all controversies that aren’t helpful for brands during sponsorship campaigns.

Russia’s relations with the West have become very strained indeed. Some even characterise the current climate as worse than the cold war.

In the past four years, Russia has been accused of invading Ukraine, meddling in the US elections, and backing Bashir al-Assad’s regime in Syria. What’s more, an official investigation cast doubt on the legitimacy of Russia’s bid to host the World Cup in the first place. Until recently, the UK and its European neighbours were threatening to boycott the event entirely, following a diplomatic rift involving the poisoning of the Skripals in Britain with a deadly nerve agent.

Whichever way you look at it, this year’s World Cup in Russia must feel like a very different marketing environment than past events.

At the 2014 edition in Brazil, the mood was generally positive despite protests over corruption allegations, while the South Africa championship in 2010 boosted tourism through a country rebrand. Germany's turn in 2006 helped boost sales for Adidas by 9 percent the following year.

This year, Adidas has once again invested bigtime to entice spending from the one million international and domestic visitors that are expected to descend on match host cities across Russia. There are Adidas pop-ups in Russian stadiums selling official uniform T-shirts and branded footballs, plans to host public Adidas-branded viewing festivals, and a high-profile advertising campaign set to play out on television screens and Instagram pages worldwide.

Yet despite the overwhelmingly warm reception that most will receive in Russia, there is a real concern for the safety of some international fans and players who might find themselves in hostile encounters. Some warn of the possibility of a vocal minority made up of ultra-nationalists and hooligans who could incite racist, xenophobic or homophobic violence.

For the first time, warnings have been issued by the Football Supporters’ Federation, an organisation that represents British football fans, for LGBTQ fans to not publicly display their sexuality at this year’s World Cup, while transgender fans are advised to go to the bathroom in groups or use handicap stalls.

While homosexuality is not illegal in Russia, a 2013 law prohibits the display of “propaganda for non-traditional sexual relations” in front of minors, which has fostered homophobic sentiments in an already conservative society. In fact, hate crimes against the LGBTQ community have doubled in the wake of the law, according to the Center for Independent Social Research. 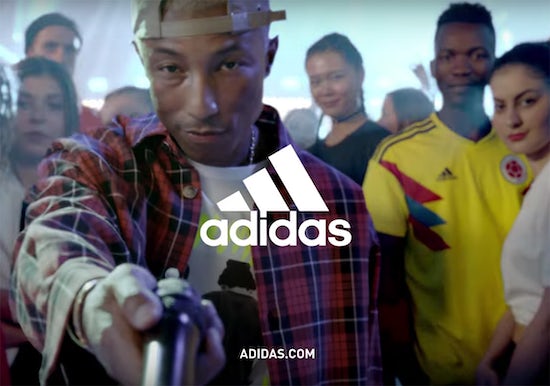 Russian officials have responded by saying that these issues do not affect the vast majority of World Cup fans or players. Yet the spectre of hostility doesn’t square with Adidas’ brand alignment with LGBTQ rights and diversity.

“For sure it’s inconsistent with the brand, but the question is — what’s the best thing for Adidas to do?” says Thode. “This is a window where they have to get through it and focus on the things they can control — it’s part of a long-term play.”

Adidas also regularly features models and athletes of all races in its campaigns, something that is at odds with the racist chants levelled against French ethnic minority football players in a friendly match between France and Russia in St. Petersburg last month. Many Adidas’ consumers in the West — especially younger ones — increasingly expect brands to take a vocal stand against such injustices.

BoF contacted Adidas for comment on several occasions but a spokesperson was unavailable at the time of publication.

“The end justifies the means,” says Sascha Amato, a fashion editor who has worked at the Russian editions of Interview magazine and Buro 24/7. “Yes, [Adidas] is supporting a World Cup in a country with countless human rights [and] LGBTQ violations, but they’ll probably sugar-coat it for the good of the game. This is the critical point where you see where they stand. And where they stand is where the money is.”

They’ll probably sugar-coat it for the good of the game.

In a recent Bloomberg interview, the sporting giant’s chief executive Kasper Rorsted hinted about the challenges they are currently facing in Russia. “This business is about managing risks. Not all investments will pay off,” he said.

For Thode, such comments are just a sign that, “they’re putting a positive spin on things without going that next step and criticising Russia directly.”

“Adidas, and every sponsor, wishes [the World Cup] wasn’t in Russia,” he continued. “They would rather it be in a country that doesn’t have the geopolitical, human rights and doping issues Russia has.”

According to Simon Thun, Interbrand’s chief executive of Central and Eastern Europe, things could come to a head if the brand is “forced into a situation where they have to make a broad statement. In a situation of riots, for instance, they’ll need to take sides.”

But not everyone sees this year’s World Cup through the dark prism of geopolitical conflict or even human rights. Perhaps unsurprisingly, Russian fashion industry insiders are much more enthusiastic about the games, their impact on the local retail market and the Adidas sponsorship.

“Football has a huge power in Russia to unite people outside of income and politics,” said Anna Lebsak-Kleimans, chief executive of Moscow-based Fashion Consulting Group.

“When you sponsor an event like the World Cup, to benefit from advertising you need to be everywhere — it will drive brand awareness,” she added, referring to the 12 Russian cities that will host matches.

Adidas remains the top sportswear brand in Russia, according to Euromonitor International, with a retail value of $8 billion in 2017. “Adidas is undoubtedly the king of the regions,” said Ekaterina Petukhova, partner at Texere Advisors.

The striped black-and-white tracksuit is ubiquitous in regional cities across demographics — as easy to find on a Gen-Z streetwear aficionado as a 70-something home-bound adult. 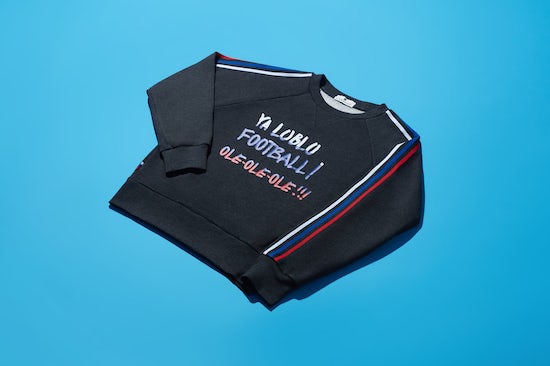 It is this strong presence — paired with the omnipresence of the brand name emblazoned across stadiums, clothing, footballs and television screens — that is likely to increase brand awareness and consumer loyalty in the Russian market.

Alexander Shumsky, president of the Russian Fashion Council and chairman of Mercedes-Benz Fashion Week Russia, is bullish about the wider impact of the World Cup on the Russian economy. "I think that the biggest surplus is going to be because of domestic consumption, and because — it’s a big thing here in Russia to have a World Cup in football,” he says.

"I think the biggest consumption will come from local football fans, and not only fans [because] it’s [contagious] and everyone wants to be included," said Shumsky.

Yet the brand has fallen far from its heyday, with 500 store closures in Russia between 2014 and 2017 as a result of less-than-favourable market forces.

Rorsted even played down the impact of the World Cup in a recent investors call, saying Russia offers less financial opportunities than Brazil in 2014 or Germany in 2010, primarily due to tumbling sales in Russia. Once making up 8 percent of Adidas’ global revenue, it accounted for 3 percent in 2017. The Adidas chief executive also said the games have become less crucial for driving sales than in previous years.

If there is a muted impact of the World Cup on fashion retail at the end of the month, it could be blamed on the overall Russian economy and international sanctions. “In 2014 everyone was waiting for some kind of recovery, but it never happened,” said Petukhova. “The consumer changed. Last year, growth of the market was at zero, but if we take inflation into account, the figures are even more disappointing.”

Football has a huge power in Russia to unite people outside of income and politics.

With GDP projected to expand by 1.9 percent in 2018, according to BMI Research, recovery is, indeed, on the horizon. Yet, “hosting the World Cup will only be playing a small role in the uptick,” said Michelle Berman, head of consumer research at BMI Research. “The rising oil price is the key driver behind Russia’s economic recovery… rather than being driven specifically by Russia hosting the World Cup.”

Moody’s investors echo the sentiment, characterising the economic benefit of hosting the World Cup as “short-lived” and “very limited”.

But whatever its impact may be on the Russian economy or on sponsors like Adidas, if the mission of the World Cup is indeed to unite people of all backgrounds through sport, then perhaps the return on investment should be measured by something besides just the bottom line.

In addition to “better exchange rates and spending”, Petukhova suggests, there is another metric that might be just as important. “Optimism,” she says.

Adidas Plays Down Impact of World Cup on Sales