Behind Burberry’s Big Bet on Its New Monogram

Executives are betting on a new monogram to signal change, boost the brand’s luxury credentials and grow its leather goods offering.

Behind Burberry’s Big Bet on Its New Monogram

Executives are betting on a new monogram to signal change, boost the brand’s luxury credentials and grow its leather goods offering.

Burberry executives, a year and a half into a multi-pronged effort to reposition the brand as a true luxury player and reignite sales growth, are betting on their new monogram to help boost the 163-year-old British stalwart’s heritage credentials.

The monogram, featuring the interlocking initials of founder Thomas Burberry, was created by Riccardo Tisci, soon after he joined Burberry as chief creative officer last year. The pattern is based on a drawing plucked from the company’s archives, which Tisci mixed with a stripe from the brand’s signature check and a thin vermillion line.

This month, Burberry is launching an entire collection of monogram products, at a wide range of price points, including £1750 ($2,200) quilted lambskin handbags and £950 bum bags, along with £1,490 trench coats, £950 silk shirts, £300 yoga mats and low-key athleisure items like plimsolls, baseball caps and £50 socks.

“It’s a really significant step for us. The TB monogram really establishes us a true luxury house,” said Judy Collinson, chief merchandising officer at the brand’s flagship store in London’s Regent Street. “It further grounds us in our heritage, which is the right thing to do. There aren’t so many heritage brands in the end.” 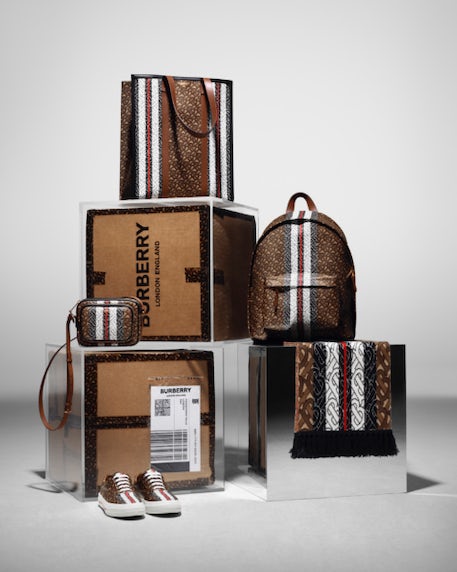 The move is also key to boosting Burberry’s position in leather goods, a critical category which accounted for only 38 percent of the brand’s revenue last year, behind core competitors. “It will build our leather goods credibility and it will introduce what we see as long-term product and it’s key to the redefinition of Burberry,” added Collinson, who joined Burberry in 2017 from Dior. (The same year, the brand also hired ex-Dior leather goods designer Sabrina Bonesi in a bid to revamp its offering).

“Will the monogram hit every single bag shape? Probably not every shape, but the vast majority,” said Collinson. “In order to talk to new customers, we needed to show them a level of change and excitement. In bags, we’ve changed almost everything.”

Easily identifiable monograms also register well on social media and can help to boost brand awareness and lure millennials, as well as newly wealthy status-conscious consumers, who are a significant driver of luxury growth.

“A monogram is an important brand anchor which can be used to display heritage, but at the same time enhance brand awareness by reaching out to a younger and broader demographic,” said MainFirst analyst John Guy.

It’s a tactic that has certainly served several major European luxury brands, including Louis Vuitton, Chanel, Fendi, Gucci and Dior, where a revamped version of the brand’s Oblique monogram now covers everything from Saddle bags to sneakers.

Only a handful of wholesale accounts — including Maxfields in LA, Browns in London, Printemps in Paris and Isetan in Tokyo — will get the new monogram collection, true to Burberry’s aim to rationalise its over-extended wholesale network, which has become a brand liability, particularly in the US.

Burberry still has a long way to go with its transformation, however. Sales growth in the year ended March 2019 was largely flat, while sales of all-important leather goods actually declined by 3 percent last year, as older lines failed to resonate. What’s more, both revenue and profit margins, which lag rivals like LVMH and Kering, aren’t expected to improve this year.

But a brand transformation of this magnitude takes time. Tisci’s products — including new bag silhouettes like the £900 Grace shoulder bag and the £1,790 Society top handle bag — only started to reach stores in February and will only account for about three-quarters of products by year-end.

“It is very early in the game,” said Luca Solca, a luxury analyst at Bernstein. On the monogram he offered: “I guess the realisation is that all major brands have monograms: Louis Vuitton, Gucci, Chanel. So, Burberry is getting one. But the fact that I have a tennis racket doesn’t make me Roger Federer.”