This week, the French conglomerate Kering delivered a record-breaking 28.6 percent increase in comparable first-quarter sales, beating market expectations and sending the company’s stock surging. The strong performance was largely powered by Gucci, which vastly exceeded analyst predictions with first-quarter comparable sales up 48 percent year-on-year, its strongest growth in more than two decades, underscoring the runaway success of the revolution put in place by CEO Marco Bizzarri and creative director Alessandro Michele. Yves Saint Laurent — which under creative director Anthony Vaccarello has remained faithful to the brand’s DNA and the template put in place by previous designer Hedi Slimane — was also a high performer for Kering, with comparable revenue up 33 percent.

Rival luxury group LVMH, which this week tightened its grip on Christian Dior in a two-pronged deal worth a total of $13 billion, also delivered strong first-quarter results, reporting a 13 percent rise in revenue. Performance was particularly strong at the company’s fashion and leather goods division, where sales rose 15 percent, beating expectations by several percentage points.

By contrast, on Monday, JAB Holding Company, which is controlled by Germany’s billionaire Reimann family, said it was putting Jimmy Choo and Bally up for sale to refocus on its expanding coffee and food businesses. A strategic review of Belstaff, another luxury brand in the company’s Labelux division, is expected to follow. The sell-offs would effectively put an end to JAB’s eight-year effort to build a luxury group that could compete with the likes of LVMH and Kering, underscoring the unique challenges of the endeavour.

So, why did JAB fail where LVMH and Kering have succeeded?

Ultimately, luxury brands are selling culture — not mere products, but the cultural meaning that has condensed around these products. Yet culture takes time to grow. Building a stable of brands with genuine social and cultural capital takes significant time, patience and associated long-term strategy and investment. This is something that aspirants often underestimate. Bernard Arnault, chairman and chief executive of LVMH, the world’s largest luxury group, began building his empire back in the 1980s, when he took control of Boussac, a troubled textiles company that owned Christian Dior, adding and evolving brands like Louis Vuitton, Céline, Kenzo and Marc Jacobs carefully and steadily over multiple decades.

It’s perhaps no surprise that the “Big Three” luxury groups — LVMH, Kering and Richemont — each has a “cash cow” brand at their core, which helps to give these companies the kind of financial stability required to invest in the long-term development of other brands in their portfolios, which might be unprofitable for years. At JAB, neither Jimmy Choo nor Bally nor Belstaff was able to provide the company with anything close to the kind of stability that Louis Vuitton brings to LVMH, Gucci brings to Kering or Cartier brings to Richemont. On the contrary, many of JAB’s luxury brands have struggled. And Jimmy Choo, the company’s only luxury success story, generated only $469 million in sales revenue in 2016, compared to $4.8 billion for Kering’s Gucci.

Building a successful luxury group also requires focus. When PPR, which acquired a majority interest in Gucci Group in the early 2000s, became Kering, the conglomerate shed many of its non-luxury holdings, refocusing its portfolio on its high-end brands. Indeed, the only struggles Kering is currently facing come from outside of its luxury portfolio.

Focus is critical because managing luxury brands requires highly specific expertise. For one, the luxury market is highly demanding and successful luxury businesses must deliver excellence across the entire value chain, from design to manufacturing to retail to customer service. The entire luxury fashion business model is fundamentally different to other sectors, where the emphasis on creativity, brand management and customer relationships is much less pronounced.

JAB was never focused on the luxury business and made significant investments in coffee and food businesses to the point where its investment in the luxury sector became what the company described as “non-core.”

That’s not to say that birthing a new luxury group can’t be done, as long as the right ingredients are in place. Across the Atlantic in the USA, Coach Inc is currently attempting to assemble a conglomerate with some of the same characteristics in order to drive growth. In January 2015, the company acquired shoemaker Stuart Weitzman for more than $500 million in cash and the company is said to be readying to buy Kate Spade. “We believe that Coach Inc can be bigger than the Coach brand,” Coach Inc chief executive Victor Luis told BoF back in December 2016.

Like its European counterparts, Coach is growing a focused stable with a powerful “cash cow” at its core. But the company is still highly dependent on its off-price business, and the lessons of JAB demonstrate that building a luxury group isn’t easy. Whether the company can grow into the elusive “American LVMH” remains to be seen. 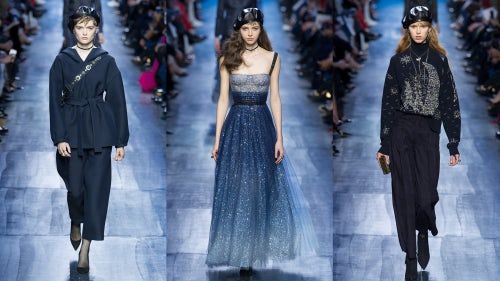 LVMH takes full control of Christian Dior in $13 billion deal. LVMH announced on Tuesday that it plans to integrate the entire Christian Dior brand within the luxury good group, as part of a two-part strategic deal to strengthen its fashion and leather goods division. The move will help create further synergies between Christian Dior Couture and Parfums Christian Dior, the latter of which is already fully owned by LVMH.

Kering shares surge thanks to Gucci and YSL. Shares in Kering rose by as much as 11 percent after the market reacted to a 31 percent rise in total first quarter sales of €3.57 billion, which was helped largely in part to stellar sales from its Gucci and YSL brands. The news added to further evidence that demand in the luxury market is improving, particular in Asia, which was previously hit by a slowdown.

Hermès expands production, as sales accelerate. The maker of Kelly and Birkin handbags said on Thursday that it planned to expand its network of leather goods workshops in France to meet growing demand in Asia, hiring 250 additional workers this year. Hermès reported an 11 percent rise in revenue in the first quarter, on a like-for-like basis.

Puma profits almost double. The German sportswear brand's profits almost doubled in the first quarter of this year, as it raised prices and cut discounting, part of a long-term turnaround plan implemented in 2013. Net income leapt by 92 percent to €50 million, while revenue exceeded €1 billion for the first time. The news comes amid speculation its parent company Kering is looking to sell the brand.

J.Crew cuts 250 jobs in reorganisation. J.Crew announced a series of organisational changes on Tuesday that included cutting 150 full-time jobs and 100 open positions. The announcement follows the departure of long-time creative leader Jenna Lyons as it faces an increasingly challenging retail environment. J.Crew also confirmed that its head of menswear design, Frank Muytjens, is leaving the company, and that it is making several changes to its executive team.

Retailers are going bankrupt at a record pace. The rapid acceleration of online shopping has meant that retailers are filing for bankruptcy at a record rate, according to data from S&P Global Market Intelligence. In just over three months, 14 chains have announced they will seek court protection, almost surpassing all of 2016, highlighting the difficulties that many companies are facing in the marketplace.

Rent the Runway's co-founder joins Walmart tech incubator. Jennifer Fleiss, co-founder of Rent the Runway has been appointed by Walmart’s new tech incubator, Store No 8, to lead its first initiative. Code 8 will develop “high personalised, one-to-one shopping experiences.” The incubator is part of Walmart e-commerce chief Marc Lore's plans to shape the retailer into a competitor to Amazon.

LVMH launches digital lifestyle and e-commerce platform. The French luxury goods group has launched Clos19, a website selling experiences as well as its Moët Hennessy wine and spirits brands. The news follows reports that LVMH is preparing to launch a multi-brand fashion e-commerce venture and signals that the conglomerate, long on the back foot when it comes to digital, is finally getting into gear.

Amazon unveils Echo Look. The online retail giant revealed the latest edition of its voice-controlled device, the Echo Look, which features a camera designed to take full-length photos. An accompanying app recommends which of two outfits is best, using fashion specialists' advice and algorithms that check for the latest trends. The $199.99 device further cements Amazon's ambitions to be a top online fashion player.