The famous Paris shopping avenue has had a tough time of late, but luxury brands are still willing to commit.

The famous Paris shopping avenue has had a tough time of late, but luxury brands are still willing to commit.

PARIS, France — The Champs Élysées is undergoing a dramatic transformation, 25 years after its last major revamp. Following the arrival of Galeries Lafayette in March, Dior and Chanel beauty stores have joined the list of luxury labels claiming a spot on what was once one of Paris’ most fêted avenues, stretching from the Arc de Triomphe to the Place de la Concorde.

Nike will also open a new flagship at 79 Avenue des Champs Élysées in spring 2020, moving into a €613 million ($676 million) building that surpassed the avenue's previous record of €600 million, paid by Apple in November 2018 for its flagship store.

Plans for other brands like Lacoste and Moncler to open in the coming months add to a broader reimagining of the world-famous thoroughfare in time for the Olympic Games, to be hosted by Paris in 2024. Retailers are drawn to the spending potential of more than 100,000 visitors per day to the world’s fourth most expensive retail street in 2018, according to Cushman & Wakefield, generating €1.5 billion in annual turnover. 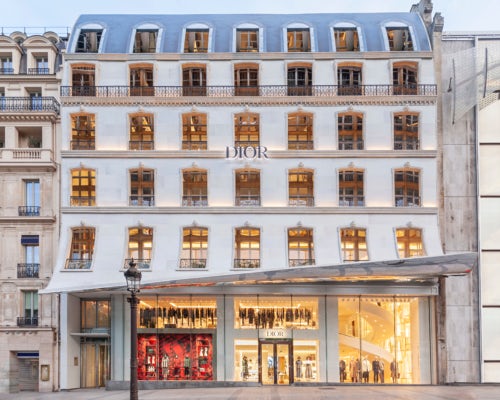 The Dior store on the Champs Elysées | Source: Courtesy

It offers hope nearly a year after the first Yellow Vests protests, which saw stores vandalised and forced to close along the avenue. "The avenue remains attractive in the premium or luxury segment," said Christian Dubois, head of retail services, France, at Cushman & Wakefield, noting a slowdown in the activity of large mass market chains.

On the odd-numbered side of the "Champs," Dior has opened a 9,600 square-foot space while their Avenue Montaigne home is renovated. The brand hosted an inauguration party during Paris Fashion Week in September, while the avenue also played host to a number of fashion week events including the opening of Jacquemus' restaurant Oursin inside Galeries Lafayette Champs Élysées, and Coperni's presentation in the Apple store. The new Dior store’s combination of “innovative experiences with architectural virtuosity, has been very well received,” LVMH said in its Q3 2019 results release.

“Dior wants to test the market with its luxury pop-up flagship, to see if the avenue can become an attractive place for luxury brands and if they can thrive there, the way Louis Vuitton has been,” said Benjamin Simmenauer, a professor at the Institut Français de la Mode. While Dior and Louis Vuitton won’t provide data on their Champs Élysées stores' sales, several sources confirm they are performing well.

“Rental values are traditionally higher on the even number side of the avenue because it is the sunny side and has higher foot traffic, but this started to change when Louis Vuitton opened on the odd numbers side. It's rebalancing,” said Eric Costa, corporate real estate director for Galeries Lafayette Group and vice president of the Comité des Champs Élysées, a lobby group of businesses invested in the avenue.

Still, there is lots to be done before the Champs Élysées becomes a "legitimate" luxury retail destination. The avenue, which plays host to some of the most popular events in the country annually including the close of the Tour de France, has become a polluted, traffic-heavy thoroughfare blighted by pickpockets and fast-food chains.

“Nothing has been done to the Champs Élysées since 1993 under French President Jacques Chirac,” said Jean-Noël Reinhardt, president of the Comité des Champs Élysées. The Comité’s plan includes creating bicycle lanes and green spaces. In the run up to the mayoral election in March, Reinhardt wants to “put pressure on political candidates to commit to revitalising the district.”

Luxury doesn’t need to be locked in a ghetto.

“The idea is to get back to the origins of the avenue, i.e. a place for a stroll, instead of an urban highway with 65,000 cars each day,” said Reinhardt. While an increase in rental prices in 2013 pushed cultural venues and cinemas off the avenue, a food court and a luxury hotel are now slated to open in time for the Olympics.

Opening a beauty store with a smaller footprint and lower rent could offer the best way for brands to test the viability of a position on a revamped Champs Élysées. The avenue has become a key location for cosmetic companies in light of the recent openings by Lancôme, Chanel and Maison Christian Dior, which now sit on the avenue alongside Sephora, Guerlain and Mac Cosmetics flagship stores. The Sephora store on the Champs Élysées is the company’s best performing in France.

But these beauty stores still rely heavily on the tourist traffic for their trade, especially as only two percent of people on the avenue at any one time are Parisian, according to a study by the Comité. This year, tourism from the Middle East and China in Paris was down 17.5 percent and 3.8 percent respectively in the first half of 2019, compared to the same period last year, according to Paris’s Visitors Bureau.

Fewer visitors means fewer sales. Revenues on the avenue were down 0.9 percent in 2018, according to Global Blue, a shopping tax refund firm. Meanwhile revenues were up in Paris’s other major shopping districts including Place Vendôme, Saint Germain, Avenue Montaigne and rue Saint-Honoré. 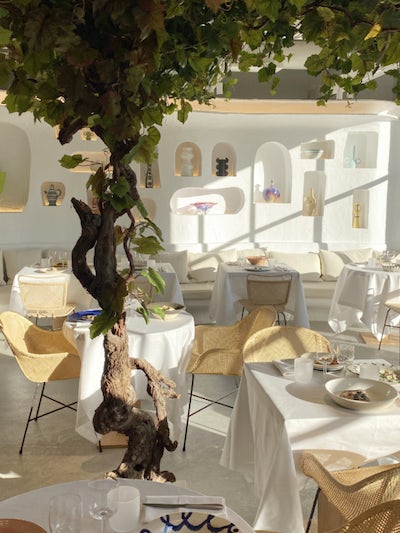 A drop in tourist numbers also played a part in the initial mixed response to Galeries Lafayette’s Champs Élysées opening. The much-anticipated four-story, 70,000-square-foot store — which stands as the largest retail space on the Champs’ even-numbered side — hasn’t hit targets since opening in March. “We are happy with the concept but the results are below our expectations,” Galeries Lafayette Chief Executive Nicolas Houzé told BoF. “We opened at the worst time, right after the most violent protests,” said Costa.

“The strong impact of the Yellow Vests protests in the first quarter has been offset and we had a stable summer. Providing there’s no other social unrest, it doesn’t seem that it will impact tourism in the [Christmas] holiday period” said Corinne Menegaux managing director of Paris’s Visitors Bureau. Long-haul flight reservations for the last quarter of 2019 are up 8.1 percent compared with the same period last year. “It’s the strength of the Champs Élysées, its resilience,” said Costa. “We believe in the long-term potential of the avenue,” a spokesperson for Galeries Lafayette said.

Longchamp recently reopened its store on the Avenue after five months of renovation work following Yellow Vest riots in March. Despite significant damage, the lure of the Champs Élysées was simply too tempting. “There’s the entire world on the Champs Élysées,” Longchamp Chief Executive Jean Cassegrain said. “It is an asset: when you have various nationalities, it protects you from the risk of dwindling tourism. Also, fashion needs traffic. There are similarities elsewhere in the world, with New York’s Fifth Avenue and Tokyo’s Ginza.”

Despite the drawbacks, Paris’ most famous avenue continues to prove a desirable retail destination for brands and consumers alike. As Cassegrain observed, “luxury brands are striving for exposure, traffic, new clientele. Luxury doesn’t need to be locked in a ghetto.”