Chanel is the latest fashion brand to be embroiled in a fiery cultural appropriation controversy. The fallout underscores why cultural IQ matters more than ever.

Chanel is the latest fashion brand to be embroiled in a fiery cultural appropriation controversy. The fallout underscores why cultural IQ matters more than ever.

This week, Chanel became the latest fashion brand to be accused of cultural misappropriation. The offending item: a $1,325 glossy black Chanel-branded take on the boomerang, a weapon used by Australia’s long-marginalised indigenous peoples for hunting, and later adopted for sport and entertainment.

Chanel makes a wide range of branded sports accessories, from tennis rackets to surfboards, and has been selling boomerangs on and off since 2005. Yet its latest release sparked a wide range of emotions on social media, from bemusement to outrage, with some accusing the brand of cultural misappropriation and ignorance.

Chanel has not stopped selling the boomerang, but a spokesperson for the company said in a statement: “Chanel is extremely committed to respecting all cultures and deeply regrets that some may have felt offended. The inspiration was taken from leisure activities from other parts of the world, and it was not our intention to disrespect the Aboriginal and Torres Strait Islander community and the significance of the boomerang as a cultural object.”

Cultural appropriation is nothing new, particularly in fashion. See Yves Saint Laurent’s 1967 Africa collection, for example. Indeed, humans have been adopting each others’ languages, styles and other cultural traditions for millennia. And today, we live in a world that is unmistakably and increasingly multicultural, as growing internet access, travel and trade accelerate the worldwide exchange of ideas, information, people and products. What’s more, while cultural misappropriation can cause harm, valid cultural appropriation can contain the seeds of creative innovation.

In fashion, inspiration now comes from everywhere — every era, every culture — at the speed of Google. But some of the same forces that have unleashed greater cultural fluidity have also given rise to growing cultural sensitivity and a new breed of digital activist (many of them members of Generation #Woke) making the lines between creative inspiration and cultural misappropriation increasingly difficult to discern, while at the same time raising the risks associated with getting it wrong.

In recent years, a slew of fashion companies have come under fire for cultural misappropriation, igniting brand-damaging controversies on social media that have become headline news. Amongst the most prominent examples, there was Victoria’s Secret, which sent Karlie Kloss down the runway in a fringed bikini and feathered Native American headdress; Marc Jacobs’ cast of mostly white models wearing dreadlocks; American Vogue’s attempt to celebrate diversity by dressing Karlie Kloss as a Japanese geisha; and Valentino’s Africa-themed collection modelled by mostly white women with cornrow hairstyles.

In hindsight, each of these transgressions appears crude and more than a little tone-deaf. So why were they allowed to occur? And what will it take for brands to better understand the lines between valid appropriation and harmful misappropriation?

In a word, the answer is cultural IQ. In a globalised world, companies must deepen their understanding of the interwoven multicultural tapestry that increasingly makes up their markets. This includes understanding specific cultural sensitivities, as well as the historical traditions, belief systems and power dynamics that often underpin them. Indeed, it’s critical that companies operating in today’s increasingly globalised and interconnected world learn to mine and remix cultural traditions in a way that is authentic, respectful and meaningful, as opposed to superficial, insensitive and exploitative.

Nicolas Ghesquière’s recent Cruise collection for Louis Vuitton, whose many Japanese references were intelligently woven together into something genuinely creative and sensitive was evidence that cultural appropriation — with the right cultural IQ — can be a positive force for fashion. Ghesquière is no stranger to Japan. He has travelled there often over the course of two decades and his love for the country is deep and authentic, resulting in a show, staged on the iconic suspension bridge at Kyoto’s Miho Museum, that was inspired by a sensitive and meaningful engagement with everything from samurai armour and Kabuki to traditional fishermen’s prints and the films of Akira Kurosawa.

Jenni Avins’s thoughtful 2015 piece for Quartz on the topic of cultural appropriation in fashion, references the example of Oskar Metsavaht, founder and creative director of Brazilian sportswear brand Osklen, whose Spring 2016 collection referenced the cultural history of the Ashaninka tribe. Here, the designer went even further than Ghesquière, approaching the tribe as a true creative partner and paying royalties to the Ashaninka people for the use of their culture. His work also served to raise public awareness of the tribe’s struggles to protect its land against illegal logging and environmental degradation.

In contrast, Chanel’s use of the boomerang was completely superficial and disconnected from the cultural significance of the object and the plight of Australia’s indigenous people. Perhaps it’s time Chanel did more than issue a statement expressing regret and donate a portion of the revenue resulting from the sale of its boomerang to Aboriginal organisations, then think twice before simply slapping its glossy brand on a cultural object that has many layers of significance.

Ralph Lauren reports $204 million loss. The American fashion brand’s fourth quarter results on Thursday reflect a more than $300 million charge related to restructuring and severance pay. Revenue also fell 16.3 percent to $1.6 billion, as the company attempts to address slowing sales amid rising competition in the industry. The results follow an announcement on Wednesday that Patrice Louvet would be its new president and CEO. Louvet joins from Procter & Gamble where he has held the role of group president of global beauty since February 2015. His appointment follows the surprise departure of Stefan Larsson, who left the company on May 1 following disagreements with Mr. Lauren over its turnaround strategy.

Burberry profit falls 21 percent. The company reported on Thursday that full year pre-tax profit dropped to £462 million ($599 million), on an underlying basis, dragged down by weak wholesale demand in the United States, underscoring the challenge facing Marco Gobbetti when he becomes CEO in July. Burberry is in the midst of a turnaround and has focused its efforts on refreshing its product range, driving efficiencies and store productivity and moving some of its operations outside of London.

L'Oréal receives bid for The Body Shop. The French cosmetics giant is reported to have received an offer for The Body Shop on Tuesday, from Italian private equity firm Investindustrial. L'Oréal , which has owned the brand since 2006, announced the company was for sale in February, amidst weakening sales and profits.

US retailers urge Trump's new trade envoy to save NAFTA. Some of America's most powerful retail associations have called on new trade representative Robert Lighthizer to support the North American Free Trade Agreement (NAFTA), which has come under fire from president Donald Trump. If the trade deal changes, apparel trade groups say the industry could be faced with rising costs and another blow to its already-fragile profit margins.

Louis Vuitton shows its Cruise collection in Japan. The show took place at the I.M. Pei-designed Miho Museum, just outside of Kyoto, on Sunday. Artistic director Nicolas Ghesquière indulged his long time love of Japan, taking inspiration from the contrasts that exist "between present day and noble ancestral civilisation, between futurism and poetry, between huge vibrant cities and delicate nature," according to the show notes. The collection also paid homage to Japanese designer Kansai Yamamota, who sat front row.

Rue21 files for bankruptcy protection. The US teen retailer, which has been struggling with debt and declining foot traffic, filed for Chapter 11 bankruptcy protection on Monday. Rue21 is the latest in a long line of retailers filing for bankruptcy as shoppers shift their spending online. The company said the new financing will allow it to support its operations during its reorganisation, which may include additional store closures to the planned 400 closures it began last month.

TJX profits fall short of forecasts. The operator of TJ Maxx and Marshalls on Tuesday reported first quarter sales that fell short of forecasts, surprising analysts as the off-price sector has largely defied the retail industry's struggles until now. It also lowered its full year profit forecast to between $3.71 and $3.78 per share, far short of analyst expectations.

Walmart first quarter sales beat estimates as online soars. The retailer posted its fastest rise in online sales in five years on Thursday, a sign that its ambitious online expansion plans are beginning to take effect, helped by last year’s $3.3 billion acquisition of Jet.com. The company said its e-commerce business rose by 69 percent in the first quarter, helping it post a 1.4 percent rise in total revenue to $117.5 billion. 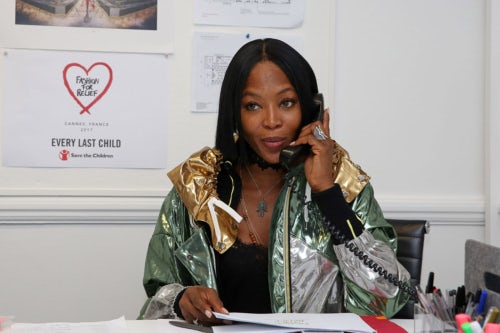 Naomi Campbell to host Fashion for Relief fundraiser. The supermodel is preparing to host her latest Fashion for Relief fundraiser on Sunday at the Cannes Film Festival, which this year is raising money for Save the Children's Every Last Child campaign. Campbell founded the charity in 2005 as a response to Hurricane Katrina, and in the years since, her events have raised funds for various causes including women's health issues and victims of natural disasters.

British Vogue's fashion director steps down after 36 years. Lucinda Chambers, fashion director at British Vogue, announced on Wednesday that she will leave the publication this summer. The move follows news in January that the title’s editor-in-chief Alexandra Shulman will also step down. Chambers’ announcement indicates a shift in leadership before incoming editor-in-chief Edward Enninful begins his new role in August.

Instagram adds new Snapchat-like features. Social media giant Facebook Inc. has added a range of new camera filters to its picture-sharing app Instagram. The face-tracking filters, video-rewind mode and hashtag stickers, are similar to those seen on its rival Snapchat and come at a time when competition in the sector is heating up. Last week, Snapchat's earnings debut saw it post disappointing results that sent its shares 23 percent lower.

Modern Dazed acquires a majority stake in Nowness. Modern Dazed, a new joint venture between Modern Media and Dazed Media, said it aims to scale the digital content platform with a focus on growth in China. Previously, Nowness was operated as a joint venture between Dazed Media and LVMH. LVMH — which, back in 2010, gave birth to Nowness when it relaunched its failed e-commerce venture eLuxury as a digital content play — will retain a minority stake in the business. The terms of the deal were undisclosed.