In the internet age, picking industry fights and making off-colour comments may actually be good for business. 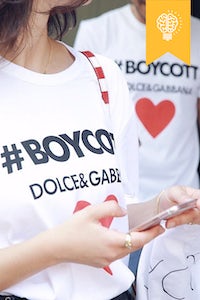 In the internet age, picking industry fights and making off-colour comments may actually be good for business.

MILAN, Italy — When Dolce & Gabbana stages its Autumn/Winter 2018 runway show on the afternoon of Sunday, February 25, several top fashion journalists will be missing from the audience. Over the years, designers Domenico Dolce and Stefano Gabbana have been quick to ban media from their shows, having blacklisted editors and writers from The New York Times, Vanity Fair, W magazine, WWD, CR Fashion Book, Italian Vogue, BoF and others at one point or another. In the past, W editor-in-chief Stefano Tonchi has even hosted a lunch during the Dolce & Gabbana show, welcoming his fellow comrades-in-exile.

Bad blood between fashion designers and their critics is not uncommon. But Dolce & Gabbana’s scorn for unflattering coverage fits a wider pattern of controversial behaviour when it comes to communications. Over the years, the designers have been labelled racist after calling a $2,395 pair of shoes “slave sandals” and homophobic after positing that children conceived via in vitro fertilisation are “synthetic,” spurring Twitter protests. (Nearly three years after #BoycottDolceGabbana first appeared, the hashtag is still used regularly.)

The designers have also been criticised for dressing Melania Trump, dismissing sexual harassment claims as trivial and demonstrating generally erratic behaviour on social media, most notably picking fights with copycat policer Diet Prada. Sometimes they fight back through design, once producing a t-shirt with "#BOYCOTT Dolce & Gabbana" emblazoned across the front.

They have also alienated themselves from the Italian fashion industry at large, disappearing from Camera Nazionale della Moda Italiana's official Milan Fashion Week calendar and refusing to participate in "Italiana. Narrating Italian History Through Fashion, 1971-2001," an exhibition at Milan's Royal Palace curated by Tonchi and critic Maria Luisa Frisa. (They used two Dolce & Gabbana pieces from a private collection instead.)

And yet, despite the chaos, Dolce & Gabbana’s sales are up. According to filings with the Milan Chamber of Commerce, total revenues — including a €75 million windfall from the early termination of their contract with licensee Procter & Gamble — reached over €1.1 billion in its most recent fiscal year ending March 31, 2017, up from €1 billion in the previous year. Wholesale remains the biggest revenue driver, generating nearly €725 million, while direct retail accounted for €167 million and licenses €99 million.

The cash on Dolce & Gabbana’s balance sheet also swelled in 2016, rising to €382.5 million from €270 million a year earlier. That’s not a bad performance for a brand whose designer duo are regularly questioned on their integrity and relevance to fashion by consumers and industry observers alike.

Dolce & Gabbana did not respond to a request for comment on this story, but their designs and marketing strategy speak for themselves. For one, they make a reliable product that attracts repeat customers. Consider the label’s ruched cocktail dresses, which come in new materials and patterns each season and offer a consistent, flattering fit. They're also notably inclusive in some ways, such as designing a hijab and abaya line for Muslim women.

They manage to deliver collections that are iconic but still feel new, tapping into the desires of the consumer.

While multiple retailers declined to comment for this story for a variety reasons — most citing the busy runway show season — Dolce & Gabbana's stockist list speaks for itself: Net-a-Porter, Moda Operandi, Saks Fifth Avenue, Bergdorf Goodman, Neiman Marcus and essentially every other major multi-brand store is a partner.

“The brand is absolutely gaining traction,” says Mario Ortelli, senior luxury goods analyst at Stanford C. Bernstein. “They manage to deliver collections that are iconic but still feel new, tapping into the desires of the consumer.”

As a private company, Dolce & Gabbana has also been able to take a long view and has made tough calls like closing its lower-end label, D&G, in 2011 to move further upmarket. “Closing down second line created a big impact on their financials for many years,” explains Ortelli. “But the brand’s positioning gained from it.”

What’s more, unlike many luxury brands that shy away from off-price sellers like Yoox and Gilt Groupe, Dolce & Gabbana has embraced the channel. “Dolce & Gabbana has a massive brand presence on the lower-margin sites,” says Andrea Squatrito, founder of RE Analytics, a Milan-based investment intelligence firm that tracks online sales for luxury brands. “They’re not thinking about exclusivity in the way other luxury brands do.”

And their off-price strategy may have not have damaged Dolce & Gabbana in the way one might expect. While some full-price retailers have reduced the breadth of Dolce & Gabbana product they carry over the past season, full-price sell-through — or the percentage of product sold before being discounted — on sites like Farfetch and Net-a-Porter is higher than average.

“It’s not as strong as Kering’s brands [Gucci and Balenciaga], but it did astonishingly well given its presence on the off-price sites,” says Squatrito, adding that RE Analytics saw a decrease in off-price activity starting in October 2017. “It could be a sign that the season was somewhat better in terms of full-price performance.”

Offloading product might be key to increasing revenues, but the way in which a brand markets those products is equally important. Costs for advertising and promotion were up, reaching over €91 million last year, up from €84 million a year earlier.

And while the company’s advertising-and-marketing spend may be higher than ever before, its allocation mix is changing. As Dolce & Gabbana has inched further and further away from traditional media, they’ve wholeheartedly embraced influencer culture, casting a host of Instagram stars, including Aimee Song, Kristina Bazan and Marjorie Harvey for their Autumn/Winter 2017 runway show.

So-called unorthodox communication will be the future within the luxury sector.

“So-called unorthodox communication will be the future within the luxury sector,” says Gian Luca Pacini, an analyst at Intesa Sanpaolo. “You need to reach the right client with the right tool and digital has, of course, become the main tool. This means you need as much content to be communicated as frequently as possible.”

Over the course of two years, Dolce & Gabbana spent an estimated $66 million across 87 traditional print publications, according to the report, with about $12 million of that dedicated to digital products, including social media, online, mobile and video. Overall, most money was allocated to American Vogue, where it spent an estimated $8.4 million over the course of 24 months. (Next in line were Harper’s Bazaar, GQ, WSJ. Magazine and InStyle.) In the past year, Dolce & Gabbana has spent an estimated $26 million on print advertising, a 7 percent decrease from a year earlier.

Like many European brands, which have been slower to embrace digital spend, Dolce & Gabbana does not often pay the online influencers it courts, instead offering them free product in exchange for promotion. (According to one source, at least some of the influencers who walked in the label’s Autumn/Winter 2017 runway show were not paid directly to do so.)

Critically, the label’s designers also speak directly to its customers through their unfiltered, often unorthodox Instagram posts. “Stefano Gabbana is a real communicator,” Ortelli says. “It’s crystal clear that he promotes his brand, but his main target is to communicate his message and engage with the consumer. There is an open dialogue.”

Indeed, why invite journalists to your fashion show when you're already connecting with the client? In the internet age, picking fights and making off-colour comments may actually be good for business.