Everything You Need to Know About Luxury Brands' Financial Results

This week, everyone will be talking about first-half results from LVMH, Kering, Prada, Moncler and other luxury brands, plus the launch of Fenty Beauty's skin-care line. Get your BoF Professional Cheat Sheet.

Everything You Need to Know About Luxury Brands' Financial Results

This week, everyone will be talking about first-half results from LVMH, Kering, Prada, Moncler and other luxury brands, plus the launch of Fenty Beauty's skin-care line. Get your BoF Professional Cheat Sheet.

Measuring the Pandemic's Impact on Luxury 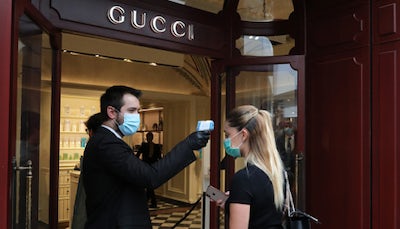 A Gucci employee measures the temperature to a customer at the store entrance | Source: Getty Images

Here’s how you know the pandemic was an unprecedented disaster: when sales data from the peak lockdown period comes in this week, even luxury’s strongest groups, LVMH and Kering, won’t have been able to avoid a steep decline.

Rather than focusing on the damage that's already done to the numerous luxury brands reporting quarterly results this week, investors will be parsing executives’ commentary for the scale and pace of rebounding sales in Mainland China, as well as gauging their outlook for the rest of the year.

At LVMH, flagship brand Louis Vuitton’s growing e-commerce business, high margins, and focus on accessories will give the group an edge on rivals. So will strong brand momentum at Christian Dior. But the group has its own unique vulnerabilities, including Sephora, its second-biggest unit, which has a strong online business but is likely seeing weak foot traffic in its key US market. LVMH’s travel business, including airport retailer DFS and hotel chain Belmond, is surely suffering as well.

As luxury's biggest and most diversified group, any forward-looking commentary by LVMH about luxury's prospects for recovery are likely to influence sentiment across the sector.

At Kering, look for clues regarding the underlying trends at Gucci, which made up more than three-quarters of the group's profits last year. The brand was already showing signs of slowing growth after a remarkable run under designer Alessandro Michele and Chief Executive Marco Bizzarri. Investors are looking for reassurance about whether the brand's maximalist reboot will keep its appeal with consumers. They’ll also be looking to whether Bottega Veneta’s resurgence can survive the pandemic. Did customers who couldn’t leave their homes still want Saddle bags?

Smaller independent brands will face even greater scrutiny. While Kering and LVMH are likely to have still made a profit during the first-half, analysts expect Prada, Moncler, and Ferragamo to post losses.

Of the three, Prada remains one to watch. Even amid hefty losses, the company is sticking to its plan to eliminate end-of-season discounts in its mainline stores. It's a confident move that could imply the company is feeling good about its rebound prospects and underlying brand heat as it prepares for Raf Simons to join as co-creative director.

Among the independents, only HHermès, long known as the fashion industry's most defensive company in a crisis, is expected to post a profit. Demand for its hand-stitched Birkin and Kelly handbags has long exceeded the supply. So even as the world economy screeched to a halt, the sought-after pieces will have still found buyers. Scarves and neckties, which do brisk business in now-empty airports, likely fared less well.

A word of warning: Companies across the sector will continue to tout the spectacular growth rates they're seeing in Mainland China. While that's a positive sign, it won't be enough to make up for all the spending Chinese clients aren't doing on shopping trips abroad.

The Bottom Line: First-half earnings will be catastrophic for luxury fashion houses, but no one will be surprised. The bigger question is whether these companies will treat the pandemic as a one-time shock, or a long-term problem requiring structural changes. 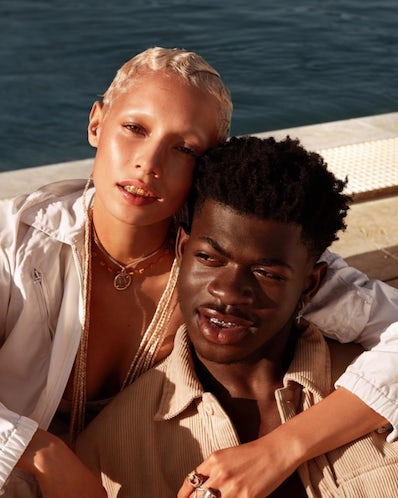 Fenty Beauty set the bar for new makeup brands. But makeup is a market in decline; skin care is undeniably the place to be right now. It was a red hot market when Rihanna first trademarked Fenty Skin last year, and has only gotten hotter during the pandemic, when consumers want glowing skin, but not necessarily a full face of makeup, for their daily endless string of Zoom calls. Of course, there’s no guarantee that a beauty brand that’s conquered one market will find success in another (Glossier discovered this last year when its new maximalist line, Glossier Play, failed to find an audience. It was discontinued earlier this year).

We’ll get a better sense of Fenty Skin’s prospects when it goes on sale at fentyskin.com this week. There hasn’t been much hint of the sort of category-disrupting messaging that accompanied the launch of Fenty Beauty. An Instagram post quoting Rihanna saying “‪I’ve been working on @fentyskin for over 2 years, perfecting formulas and creating packaging that is kind to our planet!” might have been written about any brand that’s debuted recently. The inclusive marketing that propelled Fenty Beauty has also become the norm, with plenty of newcomers following in Rihanna's footsteps.

The Bottom Line: Skin care is growing fast but it’s also an increasingly crowded market. Fenty Skin will have to bring something new to the table.

Editor's Note: This article was updated on 26 July 2020. An earlier version stated that Fenty Skin would launch at Sephora. This is incorrect. It will launch at fentyskin.com.