This week, Covid-19 is almost certain to dominate discussion and headlines again. Get your BoF Professional Cheat Sheet.

This week, Covid-19 is almost certain to dominate discussion and headlines again. Get your BoF Professional Cheat Sheet. 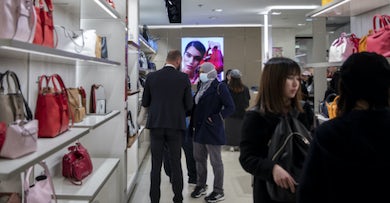 A customer wears a protective face mask at Galeries Lafayette in Paris on Tuesday | Source: Getty

Last week, the fashion industry, along with much of the rest of the world, collectively came to grips with the fact that the Covid-19 pandemic isn't going away anytime soon. In the space of 48 hours, virtually every major fashion and fashion-adjacent event, from cruise shows to Coachella, was cancelled or postponed, and companies large and small drew up plans for employees to work remotely. What happens next? Perhaps this week a new normal will emerge, as people figure out how to work from their homes, and supply chains and stores learn how to operate safely (makeup testers are rapidly becoming a thing of the past). But we'll also get a preview of the economic toll the virus is taking; people are already shopping less, and those laid off from the airline and hospitality sectors won't be shopping much at all. Fashion brands, many of which are on shaky financial ground even in the best of times, have a long, tough road ahead.

The Bottom Line: One wild card is whether the US and other major economies will push through aid packages for the hardest hit industries and their workers. Those funds could make or break countless businesses and personal budgets. (Patagonia is paying workers through its two-week shutdown, but most other brands likely won't.) There's a reason stock markets have soared or plunged on whether a deal in Congress looks more or less likely.

The Fashion Month That Wasn’t 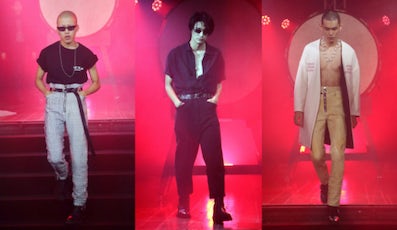 This was meant to be the week that Asia’s fashion month kicked off in Seoul and Tokyo, with Shanghai following later in the month. But while China and South Korea appear to have brought their countries’ Covid-19 outbreaks under control, there is little appetite for public gatherings just yet (not to mention the pandemic is still raging elsewhere, precluding international travel). Many designers are making the best of a bad situation, and presenting their collections for an online audience, in Shanghai and Tokyo with the backing of fashion week organisers and sponsors. Well into the Instagram and YouTube era, this may not be much of a climbdown; Armani’s livestream of its show in Milan last month saw better engagement than the brand’s conventional runway show in September, according to Tribe Dynamics.

The Bottom Line: Many designers were already pivoting their shows toward a B2C model even before the outbreak. Some of the adjustments underway in Tokyo and Shanghai may become permanent, and perhaps influence how fashion week plays out in New York and Europe.

— Zoe Suen and Alexandra Mondalek contributed to this item

Can the American Dream Survive Coronavirus?

Opening a new mall in 2020 was always a risky proposition. But the backers of American Dream in New Jersey are staring down a worst-case scenario as the outbreak delays a much-hyped opening of the long-in-the-works project's first stores. New York, home to the most Covid-19 cases of any US state, is just across the Hudson River from the 3-million-square-foot retail and entertainment complex. A growing number of Americans appear to be following their cohorts in Italy and China in avoiding public spaces to minimise the chances of infection, and retail analysts anticipate that malls could even be shut down by local governments. American Dream, with its emphasis on hands-on experiences ranging from roller coasters to bunny gardens, may be especially unappealing to worried shoppers.

The Bottom Line: The $5 billion American Dream project won't live or die on its opening weeks. But the project, already facing questions after anchor tenant Barneys dropped out, is off to a rocky start.