Can Foot Locker Be Cool?

How one of the world’s biggest athletic footwear retailers stumbled through the sneaker boom, but plans to catch up with the market.

Can Foot Locker Be Cool?

How one of the world’s biggest athletic footwear retailers stumbled through the sneaker boom, but plans to catch up with the market.

NEW YORK, United States — A new golden age of sneakers has arrived, but Foot Locker, of the world’s biggest athletic footwear multi-brand retailers, has largely missed out on the boom. Its sales have slowed, its operating margin declined and its stock is down, even as Nike, Adidas and other brands its sells reap the windfall.

The problem is not just the 45-year-old Foot Locker’s stodgy image as a mall anchor, but also its old school approach to being a middleman in a market where limited hype releases bring a halo effect to every brand and retailer associated with them. Today's customers, particularly in the US, care more about trends and aesthetics than athletic performance when buying sneakers — making cultural relevance a key factor.

Foot Locker has a plan to join the cool kids. The retailer has quietly set up an in-house incubator, Greenhouse, that will produce limited-edition products in collaboration with influential designers and brands. It’s a model that has become popular in recent years among brands looking to change their narrative. Moncler’s Genius programme is the gold standard, with similar initiatives underway at Tod’s and Calvin Klein, among others.

The main difference is that Foot Locker is primarily a retailer: its nearly $8 billion in annual sales primarily come from a few key brands, namely Nike, Adidas and Puma. Each has its own identity and distribution strategy. To succeed, Foot Locker needs to develop its own personality and get involved in creating sneakers, rather than just selling them, said NPD’s Senior Analyst Matt Powell. 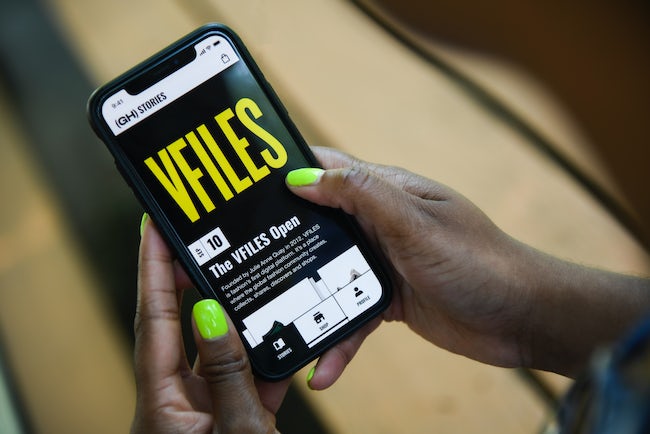 A project with VFiles and Fila will be the first to come out of Foot Locker's new incubator Greenhouse | Source: Courtesy

Led by Mel Peralta, formerly the lifestyle marketing manager at Timberland, Greenhouse’s three-person team will establish partnerships with a wide range of emerging and established brands, artists and designers. Members of the first class of collaborators include Los Angeles streetwear brands Rhude and Diet Starts Monday, designers Dao-Yi Chow of Public School and Nicole McLaughlin of Reebok, as well as brands more familiar to Foot Locker customers like Starter and New Balance. Other projects will match emerging designers with an industry mentor, the first of which will be Treis Hill of ALife, the 20-year-old New York streetwear brand.

Products that come out of these partnerships — apparel, footwear, art and more, for men and women — will be available to purchase only on the Greenhouse mobile app, with the potential to be extended into Foot Locker stores in the future. The incubator will release one project at a time, with availability windows ranging from minutes to weeks, officially starting with a VFiles and Fila collaboration in September. Among the upcoming projects is a sustainability focused collection from Dao-Yi, called O-1, planned for December.

The hope is that Greenhouse will remove some of the barriers preventing Foot Locker from hopping on board with the latest sneaker trends, namely the company’s enormous size. The chain has typically needed designers and brands to create products that can be sold across 3,200 stores in 27 countries, which meant sticking closely to mainstream tastes.

Greenhouse is “creating a space for emerging brands and emerging ideas that also didn’t have the pressure of massive scaleable units behind it,” Peralta said.

Cultural relevance, not revenue, is the main goal, said Berger. Some projects won’t result in products for sale; Greenhouse plans to partner with visual artists and sell their work without taking a commission, as well as other types of artists and musicians whose songs will be featured on the app.

“The pressure of what you would expect to come from us and the formality and the public company‚ it comes with a stigma,” said Jed Berger, Foot Locker’s chief marketing officer. “We have brand diversity, product diversity, banner diversity, customer diversity, global diversity. The missing piece was being a little bit closer to the culture.”

Berger, who spoke about Greenhouse for the first time in-depth with BoF, first announced the project at a Foot Locker investor presentation in March. At the meeting, executives explained their strategy shift following a disappointing 2017, when revenue was flat and comparable sales dipped by 3.1 percent, even as Nike, Adidas and others saw sales boom.

Foot Locker was forced to abandon plans to grow revenue to $10 billion, in favour of a strategy built around digital sales, expansion in China, reformatted stores and localisation that aims for more modest growth.

“We didn’t have the inherent engagement that you need with the customer to truly create a relationship, not a transaction,” said Chairman and Chief Executive Officer Richard Johnson at the March investor presentation. “The lessons were painful.”

Foot Locker’s challenges are far from unique. Many retailers are saddled with bloated store networks ill-suited to a time when fewer people shop in malls. Meanwhile, sneaker culture flourished online, where Foot Locker is less of a factor (the company doesn’t break out e-commerce sales, but non-store sales represented 15.4 percent of total sales in the first quarter). Major brands are driving more customers to their own sales channels, saving the most desirable sneaker releases for custom apps or online stores. Nike, which represented 67 percent of Foot Locker’s offerings in 2017, has been particularly aggressive about favouring direct sales, and also began selling on Amazon that year.

Greenhouse will give Foot Locker a way to shift its power dynamic with brands, said retail analyst Gabriella Santaniello, who said the retailer has largely been beholden to the brands it carries and what those brands decide to release at its stores.

“It’s a way for them to drive [sought after products] instead of just being subject to it,” she said. Other multi-brand retailers who have had success driving their own collaborations include Urban Outfitters and Zumiez, which sells apparel for fans of action sports like skateboarding.

At the end of the day, Footlocker is still highly dependent on malls, which NPD’s Powell describes as its greatest vulnerability. In 2018, about 80 percent of its stores were in malls, a number the company hopes to reduce to 70 percent by 2023.

Last year, Foot Locker changed its mission statement to focus on celebrating youth culture. It closed 100 stores and renovated others while developing a new brick-and-mortar model it plans to roll out over the next three years. It’s investing more in its mobile and web platforms, point of sale systems, data capabilities and increasing the speed of its supply chain. It launched a more modern loyalty program.

We used to be product pickers. What we are today are demand creators.

It also started carrying more exclusive product from its major brands. A recent example includes Nike "Home & Away” collections launched in December and available only through Foot Locker. The products were exclusive to each city where they launched — Houston, Atlanta, Miami, and several others — giving the chain retailer a local relevance. The challenge is to now scale these kinds of projects.

“We used to be product pickers. What we are today are demand creators because we now have the ability [through data] to understand the consumer,” said Foot Locker’s Head of North America, Stephen (Jake) Jacobs, at the investor presentation.

The changes started to pay off in 2018 when comparable sales increased by 2.7 percent. In the most recent quarter ending May 4, total sales increased 2.6 percent to $2.08 billion and gross margin improved by 30 basis points to 33.2 percent. But analysts were disappointed because it came short of their projections, and the company lowered its expectations for the whole year. Inventory also increased in the quarter, up 1.7 percent from the same period last year.

The transformation is still underway, and at the investor day, Johnson emphasised the priority on becoming a more agile organisation in order to be better prepared to react to the needs of its consumers.

The company is hoping Greenhouse, which doesn’t have the pressure to become a major revenue driver, will be a catalyst for that agility internally, in addition to a consumer-facing initiative.

While operating independently, Greenhouse’s team will “step in from time to time and work with our group to show them … how an idea might help their business today,” said Berger.

“We’ve just wanted people who … could really look to contributing to what the company could be in the future,” said Berger.