For Luxury, an Acceleration of the Inevitable

Will the coronavirus pandemic change the way consumers shop forever? When it comes to the market for personal luxury goods, expect behaviour to shift far more quickly than anticipated.

For Luxury, an Acceleration of the Inevitable

Will the coronavirus pandemic change the way consumers shop forever? When it comes to the market for personal luxury goods, expect behaviour to shift far more quickly than anticipated.

NEW YORK, United States — It’s true that the House of Chanel survived multiple world wars, the stock market crash of 1988, the Great Recession, and many other world-changing, life-altering events. So did Gucci, Louis Vuitton and Prada. But the modern luxury industry as we know it — where brands are multi-billion dollar powerhouses, employing hundreds of thousands of people across the globe, up and down the supply chain — has only really existed for the past 30 years, when LVMH’s marquee brands began swelling in size, and competitors like Kering and Richemont began building their own formidable stables.

In many ways, the coronavirus pandemic is the first global crisis that will deeply impact the sector since the industry morphed into a virtual oligopoly. How will it fare? The short answer: expect the expected, and at lightning speed.

During the Great Recession from 2008 to 2009, the worst economic downturn in US history since the Great Depression of the 1930s, the luxury market was disproportionately impacted, contracting 8 percent globally compared to the overall apparel market’s 5 percent shrinkage. Because personal luxury goods are discretionary purchases, consumers tend to abandon them first, especially from brands that have not developed an emotional reason for existing in the eyes of the consumer.

However, after that downturn, the luxury industry bounced back more strongly than perhaps anyone could have anticipated. At the end of 2019, LVMH, which owns brands including Louis Vuitton, Christian Dior and Celine, became the second most-valued company in Europe, following oil and gas giant Royal Dutch Shell, with a market capitalisation passing the €200 billion mark ($217.9 billion). That same year, the group, which now includes more than 70 brands across categories such as wine and spirits, jewellery and watches, travel and fashion, generated €53.7 billion ($58.5 billion) in revenue, up 15 percent year-over-year. Its closest rival, Kering, generated €15.9 billion ($17.3 billion), up 16 percent from a year earlier.

The coronavirus pandemic is the first global crisis that will deeply impact the sector since the industry morphed into a virtual oligopoly.

More than a decade after the Great Recession ravaged the global economy, the luxury industry is now facing an even greater threat: a pandemic that has halted nearly all trade in a large part of the world.

The next six months may be far more damaging to luxury than the previous downturn, with several struggling players — mostly debt-ridden multi-brand retailers and cash-poor independent brands — not making it out the other end. McKinsey estimates that the global industry for personal luxury goods will contract by 35 to 39 percent in 2020 compared to the previous year. However, by 2021, positive growth could return at 1 to 4 percent compared to the 2019 baseline. For companies that do make it through to see a return to growth, what will the new normal look like?

Post-downturn, the luxury industry had two levers of growth that cannot be exactly replicated this time around. For one, luxury brands started charging a lot more for the products they sold at full price. In 2000, the starting price for an Hermès Kelly bag was $4,800. By 2013, it was $7,600, reflecting a 58 percent increase in 13 years, 1.5 times the rate of inflation during that period.

While raising prices helped boost margins, the Chinese market, which, for most brands, only emerged as a significant source of revenue in the mid-2000s, became the engine of growth. Chinese consumers were responsible for more than half of global luxury growth between 2012 and 2018, and total spend by Chinese consumers is expected to make up 40 percent by 2025, according to a 2019 report by McKinsey.

But while both of those levers can still be pulled, the circumstances driving them are now different. “Over the past three or four years, the consumer’s behaviour was changing regardless,” said John Idol, chief executive of Capri, the American group that controls Michael Kors, Versace and Jimmy Choo.

The coronavirus pandemic will only accelerate that change. 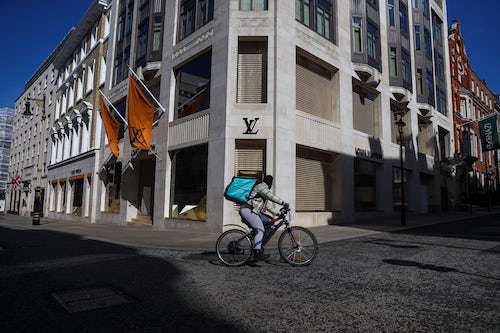 For instance, while it’s never been more important to win over China’s growing middle class of brand-conscious shoppers, the focus will increasingly be on meeting them locally, not abroad. There was already a movement toward this, as price harmonisation at brands like Chanel made travel retail less attractive.

In 2019, Chinese consumers took more than 150 million trips abroad, with McKinsey estimating that purchases outside the mainland accounted for more than half of China’s luxury spend that year. Now, with travel retail suspended due to international lockdowns, Chinese consumers have no other choice but to shop at home.

“Travelling shoppers will take significantly longer to return,” said Pierre Mallevays, founder and managing partner of Savigny Partners LLP, a mergers and acquisitions advisory firm focusing on luxury brands and retail. “This means travel retail and tourist-dependent stores will continue to suffer into 2021.”

Brands have never been more incentivised to nurture the local market while retail in other major regions is shut down completely, but that shift will continue once retail operations return to normal globally. “The Chinese will become even more important,” said Luca Solca, an investment research analyst at Bernstein. “The Chinese economy should be the least damaged from the crisis.” However, not all signs are necessarily pointing in that direction. The World Bank’s latest forecast adjusted for Covid-19 impact reveals that China’s economic growth is projected to decline from 6.1 percent in 2019 to 2.3 percent in 2020 (in the baseline) and 0.1 percent (in the lower-case scenario).

Self-isolation has also forced another change in behaviour that is likely to remain once the dust settles: more shopping online. “Digital will enjoy a step-up,” Solca said. While e-commerce channels are likely to see a boost — as more consumers get comfortable with making high-price purchases online as they remain hesitant to visit crowded public spaces — other channels, like multi-brand retail, are primed for contraction even after lockdowns are lifted. Some luxury stores will not survive the lockdown, as constrained cash flow will make it impossible for them to pay their creditors and clients.

“Channel distribution will weigh even more heavily towards online — and further away from wholesale,” he added.

Right now, even retailers specialising in discounted luxury goods are struggling. In the US, American off-price chain Ross, which is similar to TJ Maxx, told vendors it was cancelling orders for up to three months. But come autumn, the discount channel will inevitably get busy, as excess inventory from the first nine months of the year will flood the market. Whether or not the demand will be there remains to be seen.

Many consumers will be looking for so-called 'investment' pieces — minimalist, last-forever items.

That inventory glut will force brands to be more conservative about their autumn and spring production runs, if they are even able to produce the autumn season at all. What this will likely spur is a move further upstream for more companies, so that they can participate in “reactive” manufacturing, as one luxury executive called it. Companies like Hermès, Chanel, Gucci and Louis Vuitton own their own factories in Italy, France and beyond, which means they can more easily stop and start production.

Luxury consumers are also likely to, at least for the time being, adopt the “fewer, better things” mantra that environmentalists have been advocating over the past decade. While this could spur increased activity in the second-hand and rental channels once fear around the virus contagion subsides, it also means that many consumers will be looking for so-called “investment” pieces — minimalist, last-forever items — that feel more responsible given the state of the world. “Call it cautious consumption,” said Mario Ortelli, managing partner of luxury advisors Ortelli & Co. “It will take more to justify a purchase.”

There is also a contrary school of thought suggesting that consumers in some market geographies and segments will release pent-up demand once there is light at the end of the tunnel. Instead of restraint, some cohorts in the uber wealthy demographic may choose to spend like crazy on decadent, fun, outrageous and exuberant things.

With either scenario in mind, expect an uptick in bespoke shopping experiences both online and off, with customer relationship management tools that allow brands to keep up an ongoing dialogue with each client. “Consumers want their shopping experience to be a bit more tailored to them,” Idol said. “As a part of that, they want their sales associates to really talk to them, think about the way they dress.”

Consumers want their shopping experience to be a bit more tailored to them.

Of course, this new reality will only affect the companies that make it through the next six months. Some companies will go private in order to manage the situation without the pressure of public markets, as may be the case for supply chain giant Li & Fung. But the fallout signals an opportunity for strategic groups like LVMH and Kering, which will have the capital to make further acquisitions of targets that may well be more affordable than they once were when this is all over.

Independently run companies including Moncler and Prada, which have already been subject to takeover rumours for months, may suddenly be more amenable to such overtures. The same goes for the likes of Salvatore Ferragamo, Brunello Cucinelli and even Ralph Lauren, while mid-sized companies — those with annual revenues in the $100 to $500 million range — will struggle to compete against the groups, which control everything from the supply chain down to the retail real estate.

In the post-pandemic era, consolidation of the luxury market will only intensify. Likening the future rush of M&A activity to a possible “tsunami,” Ortelli was quick to point out that the fallout from the coronavirus won’t be a crisis for everyone. For some luxury players it will definitely be “a unique opportunity,” he said.

The Next Wave of Luxury E-Commerce

Rental and Resale Were Supposed to Be the Future. Could Coronavirus Change That?