The Kendall Jenner Effect: How Long Can it Last?

Commercial tie-ups with the super-influencer may soon yield diminishing returns.

The Kendall Jenner Effect: How Long Can it Last?

Commercial tie-ups with the super-influencer may soon yield diminishing returns.

On Wednesday, the 21-year-old model, television personality and super-influencer Kendall Jenner posted a playful ‘Boomerang’ to her 81.3 million Instagram followers announcing her latest commercial tie-up as a brand ambassador for Adidas Originals. In the post, Jenner wears an iconic Adidas tracksuit along with Adidas Gazelle sneakers as she drives a golf cart past a white wall emblazoned with the brand’s trefoil logo and the words “Welcome to the Family.” The family, of course, includes Jenner’s brother-in-law, the hip-hop artist Kanye West, who partners with Adidas on his popular Yeezy line.

Adidas, for its part, announced the deal with a simple statement: “A longtime fan of the brand, Kendall embodies the spirit of Adidas Originals as a creative force shaping the world today by challenging the status quo in her very own way.”

There’s little doubt that Jenner — originally known for appearing in reality television show “Keeping Up with the Kardashians” — is challenging the status quo when it comes to growing and monetising her personal brand, especially online, where she commands a combined Instagram, Facebook and Twitter following of over 119 million. Indeed, the multi-pronged business she has built around herself — encompassing everything from modelling and acting to endorsing a wide range of products — earned her $17 million in 2016, according to Forbes, and is a veritable case study in the value of digital influence.

But the last few months have been tough for Jenner. In April, she appeared in a grossly miscalculated Pepsi ad that was almost universally condemned as a vacuous attempt to exploit the symbolism of protest movements like Black Lives Matter — and ultimately canned. Days later, she was embroiled in a controversy linked to her endorsement of the ill-fated Fyre Festival, which reportedly paid her $250,000 for a promotional Instagram post. In May, she appeared on the cover of Vogue India’s 10th anniversary issue, which was widely criticised for featuring a white American and not an Indian woman.

Still, Jenner remains a powerful commercial force and the so-called “Kendall Jenner Effect” generates measurable returns for her commercial partners, not least for the incredible distribution she can offer them. Jenner is more than a digital billboard, however. In addition to reach, the emotional engagement she creates makes her much more than a mere media pipe.

But as Jenner takes on more and more partners, does she risk spreading herself — and her personal brand — too thin, diluting her appeal to brands and consumers alike?

Fashion insiders will, no doubt, remember the case of Pierre Cardin, the French fashion designer best known for his innovative Space Age aesthetic. Cardin was an innovator when it came to business, too. He was one of the first to see his name as a brand and pioneered a licensing model by which he successfully extended Pierre Cardin into adjacent product categories like perfume and cosmetics. But the approach was so successful that Cardin got carried away, granting more than 800 licenses in 94 countries and ultimately eroding the credibility of his brand as he attached his name to products like baseball caps and cigarettes — even toilet paper.

Does the cautionary tale of Pierre Cardin contain lessons for Kendall Jenner and her brand partners? Unlike Pierre Cardin, a fashion brand which ultimately trades on cultural meaning, Jenner is a shiny but ultimately blank screen onto which any brand can be projected; something of an empty vessel ready and able to carry any marketing message to her millions of followers for whom she is almost like a digital neighbour, ever-present, approachable and safe. This makes her highly flexible — equally able to promote luxury labels, mobile apps and music festivals.

But this kind of universality surely has its limits and her commercial tie-ups may soon start to yield diminishing returns, prompting questions for brand partners on the risks of affiliating themselves with influencers who seem to have reached their peak.

The US withdraws from the Paris Climate Agreement. Donald Trump has backed out of the landmark agreement signed by 195 countries in December 2015 in a global effort to tackle climate change. For the fashion industry — whose supply chains rely on parts of the world that are already suffering the effects of climate change — Trump’s actions are devastating. Global cooperation helps “drive this change through the whole value chain… from the cotton farmers, to the customers that are wearing our products,” Pierre Börjesson, sustainability business expert on climate at H&M, told BoF in 2015.

Michael Kors is to close 100 to 125 stores. The decision came as shares fell by more than 6 percent on Wednesday. Total sales were down by 11.2 percent to $1.06 billion in the last quarter. The decision to shutter stores indicates that the company’s turnaround strategy is proving unsuccessful, especially given that the market for premium accessories has grown at a reasonable rate. Experts say the brand must do more to excite and inspire customers again.

Millennials and Gen-Z will account for 45 percent of luxury consumers by 2025. The Bain & Co. Luxury Study, released on Monday, predicted that millennials and Gen-Z will boost the value of the luxury goods market to €290 billion ($324 billion). But the report’s authors warned that the younger generations’ values and spending habits are at odds with the traditional business models of many luxury brands. While luxury goods sales fell last year, spending is expected to grow by 2-4 percent in 2017, thanks to increased spending in China and European tourism.

Gucci showed its Cruise 2018 collection at the Palazzo Pitti in Florence. The Renaissance-inspired collection was a romantic iteration of Alessandro Michele’s signature aesthetic. The designer said he was thinking about parallels between centres of power and progress, past and present. One look, clearly a Gucci-fied nod to one of Dapper Dan’s designs, ignited passionate online debate surrounding cultural appropriation and creativity.

A Mavi Jeans IPO could be Turkey’s biggest since 2013. The owners of the Turkish denim brand are set to raise as much as $400 million as majority shareholder Turkven Private Equity prepares to put its 55 percent stake on the market. The offer range suggests an IPO of $328 million to $394 million. A successful IPO for Mavi would be Turkey’s biggest in dollar terms since 2013. The expected price range values the company at as much as $715 million.

India’s new cattle laws could affect global fashion giants. A ban on the sale and slaughter of cattle could impact brands like Gucci, Armani, M&S and Zara, which rely on India’s $5.6 billion leather industry. As the world’s second largest leather exporter, the ban will also impact 2.5 million workers. The industry has three months to prepare for the nationwide ban, initiated by the Indian prime minister in May.

Lululemon is to close 40 girls' stores. The athleisure retailer plans to close 40 of its 55 Ivivva stores while converting half of those that remain to Lululemon-branded stores. The yogawear company jumped 16 percent in late trading Thursday after it made the Ivivva announcement, and also topped analysts’ earnings estimates. CEO Laurent Potdevin previously blamed a slow start to the quarter on poor web traffic and a dull assortment that lacked colour.

British high street sales have been hit by weak demand. Sales fell 1.3 percent in May, due to a lack of demand for clothes and shoes, accountancy group BDO revealed on Friday. Like-for-like sales in the fashion sector fell 3.6 percent on the same month a year ago, making May the fourth month of the year to see no growth in sales in stores. Spending in the lifestyle sector, which includes health and beauty and leisure goods, rose 3.9 percent, buoyed by record tourist numbers and the weak pound.

The founder of French Connection is in a battle with his investors. Chairman and chief executive Stephen Marks has been accused by investors of “not playing it clean.” Marks, who owns a 42 percent stake in the company, is being pressured to step down from his role following a controversial board reappointment that violated listing election rules. French Connection — which Marks founded in 1972 — has suffered year-on-year losses; last year’s pre-tax revenues were £5.3 million.

Hermès Birkin Sets Record Auction Price. Christie’s has sold a Birkin adorned with 18-karat gold and 10 carats of diamonds for HK$2.94 million ($380,000). The matte white crocodile skin bag was purchased by an anonymous bidder in a sale in Hong Kong. Auction houses have broken a slew of price records in recent months as prices for rare items increase. Sotheby’s set the record auction price for a pair of earrings earlier this month, selling a duo of blue and pink diamond jewels for $57 million. 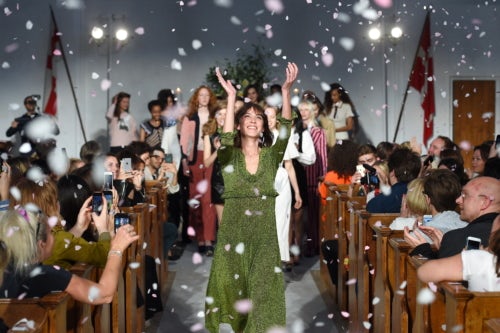 Alexa Chung launches her own fashion label. The former model and television presenter hosted a runway show in London on Tuesday. The “see now, buy now” collection — which comprises of ready-to-wear, shoes and jewellery — launched at 55 luxury retailers including Selfridges, Galeries Lafayette and Matchesfashion.com, as well as a dedicated e-commerce platform. Chung’s signature style has seen her collaborate with a number of brands on capsule collections, including AG Jeans, Madewell and Marks & Spencer.

Hugo Boss names Yves Müller as chief financial officer. The appointment fills a position that has been vacant for just over a year. Müller joins the brand from coffee company Tchibo, where he has served as finance chief since 2006. Müller, who is expected to begin his role before the end of the year, succeeds Mark Langer, who was promoted from CFO to CEO in May of last year.

Mary Meeker releases annual Internet Trends report. The former Wall Street analyst outlined what she believes will be the major forces driving technology on Wednesday at the Code tech conference. Meeker’s analysis has great implications for the fashion industry, highlighting a need for innovative approaches to marketing and product development, the importance of consumer desires and the value for fashion brands in applying tenets of gamification to the shopping experience.

Amazon stock price hits $1,000 for the first time. The e-commerce giant’s stock price is up about 40 percent from a year ago. Shares have been on an upward trend since the company reported blockbuster first quarter sales in April. This marks a new milestone for a company dominating online retail and cloud computing. Amazon is on track to succeed Macy’s as America’s biggest apparel retailer as it launches private label clothing and its Echo Look device.