How Fashion Brands Strike Gold Outside NY and LA

In the era of the so-called retail apocalypse, many brands outside of fashion capitals are still finding success. BoF outlines how brands from Seattle to New Orleans and Minneapolis have managed to do it.

How Fashion Brands Strike Gold Outside NY and LA

In the era of the so-called retail apocalypse, many brands outside of fashion capitals are still finding success. BoF outlines how brands from Seattle to New Orleans and Minneapolis have managed to do it.

NEW YORK, United States — Billy Reid followed in the footsteps of many up-and-coming designers when he started his men’s clothing line, William Reid, in 1998: he rented a studio in Chelsea, staged runway shows and in 2001 won a CFDA award. His next runway show on September 10 of that year was a high-water mark. In the economic downturn following the terrorist attacks, Reid left New York.

He chose a new path for his next brand, Billy Reid, this time launching in Florence, Ala. in 2004. Today he counts $30 million in annual revenue and 12 stores across the US, with two more on the way this year in Birmingham, Ala. and Fort Worth, Texas.

“We’ve definitely straddled being on the outside, but yet still somewhat connected to the mothership,” said Reid of leaving New York.

Buzzy direct-to-consumer companies like Allbirds and Everlane generate attention with their minimalist branding and crowds of millennial shoppers outside their stores in New York and San Francisco. But even at the height of the retail apocalypse, plenty of brands are finding a path to success the old-fashioned way, building national or even international names from a base of brick-and-mortar stores far from the coastal fashion capitals.

These brands span price points and categories, from Billy Reid’s contemporary apparel to Edina, Minn.-based Evereve, a mid-priced women’s chain with 86 stores, none of which are in New York or California. Some rival the trendiest online start-ups in size despite making far fewer ripples in the wider fashion world: Evereve anticipates $147 million in sales this year.

Most found creative paths to success, whether it was through trunk shows in sorority houses instead of runway shows or hosting local festivals.

Of course, these brands face their own challenges, from finding manufacturers to hiring design talent. That’s on top of the usual hurdles facing a fashion business, whether it’s rising marketing costs on Instagram or competition from mega-retailers like Amazon and Walmart.

So how do you build a successful brand outside of a major fashion capital? BoF outlines how brands from Seattle to New Orleans to Minneapolis have managed to do it.

Cities like San Francisco, New York and Los Angeles have a plethora of resources for brands just starting out, from access to investors and manufacturers to a large pool of design talent and consumers eager to discover the next big thing. For brands outside of major fashion capitals, finding creative ways to leverage local resources is key.

Jolie Bensen Hamilton of New-Orleans apparel brand Jolie and Elizabeth found that engaging the community and raising awareness for her brand was actually easier in a smaller town.

“Every TV channel, every blog, everyone was just so supportive,” she said. “To this day, we have never paid a dollar in advertising … if I would have done this in New York or LA, it would have been the opposite. You’d be drowning in a vortex to get your name out there.”

If I would have done this in New York or LA, it would have been the opposite. You’d be drowning in a vortex to get your name out there.

While some brands acquire big investors early on, much like their counterparts in New York or San Francisco, initial funding outside these cities often comes from eager customers and unlikely sources within the local community.

Many of the brands that spoke to BoF relied on crowdsourced funding on Kickstarter at the beginning, with founders hosting pop-up events in their homes or local events to gain traction for possible investors and customers.

“We decided to take every avenue to try and find an investor that we could … everything from websites to Craigslist to word of mouth,” said Bensen Hamilton, who started her brand, known for its seersucker dresses, in 2010.

The same creative approach is applicable to finding employees and design talent. Convincing talented designers to forego opportunities in New York or Los Angeles can be difficult — but not impossible.

“That was definitely the trickiest thing when I first started," said Stephanie Beard, founder of Austin-based brand Esby Apparel. "I really struggled with finding trained individuals in the fashion industry."

Beard scouted potential hires among the people who attended the launch party for her Kickstarter campaign 2014. She spent time and resources training employees who are still with the brand today.

“All of the staff that I brought on to the team for the first four years of the business were trained under me and by me,” said Beard. The brand has one store in Austin, and her designs are sold in about 31 stores in four countries.

Fran Dunaway, co-founder of Seattle-based TomboyX, said community colleges that are focused on textiles and product-based design have proven to be valuable sources of talent.

I really struggled with finding trained individuals in the fashion industry.

“I took 26 flights to New York ... in one year,” to meet with manufacturers, potential investors and network with other designers, said Reid, describing it as "dual citizenship in some ways."

In order to make up for the cost of frequent travel, Reid uses sourcing trips to strengthen relationships with wholesalers and scout out new markets.

On a recent trip to LA to meet manufacturers, Beard met with the owner of a store that carries her collection and staged a pop-up.

“It was Father’s Day weekend, and we brought our menswear collection and our swimwear collection, which we don’t usually wholesale,” said Beard. Beard also goes to wholesalers in Brooklyn to do pop-ups and participate in local markets and fairs.

Plenty of brands advertise in search results or social media whether they’re based in New York or Alabama. Starting out as a regional label also requires a more low-tech approach: word of mouth, catalogues, pop-ups, charity shopping nights and festivals.

After Evereve sent out its first catalogue in March of 2019, year-over-year growth doubled. Another catalogue to promote a Mother’s Day sale in May caused its website to crash. The brand postponed the sale to the following day, and the company had its first $1 million day of sales, said Mike Tamte, who co-founded the chain with his wife Megan in 2004. 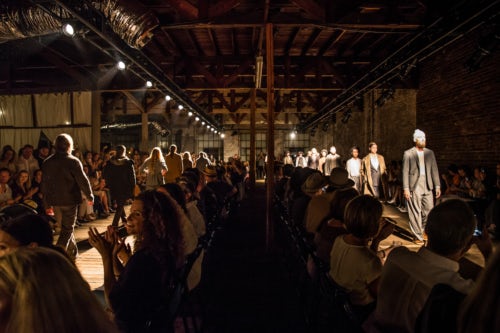 Billy Reid also relies on mailing catalogues and books to acquire and retain customers, citing efforts to expand its direct-to-consumer mailings on a broader scale.

Building an online presence and platform is still important for brands, and can also provide insight into consumer demographics and locations. Beard looks to online sales outside of Austin to gather data on possible locations for future stores. Influencers tout Evereve’s apparel on Instagram, with hashtags like #fashionmom and #fashionover40.

For Evereve’s 86th store opening in Louisville, Ky. last week, the retailer met with local influencers but also mailed out postcards and flyers to potential customers.

For Esby Apparel, collaborating with local businesses and events in town has raised brand awareness for consumers outside of Austin as well. During South by Southwest, a music and technology festival that draws an international audience, the brand planned their own event, Esby Fest. It included a fashion show, panel discussions with local artisans and live music with food and drinks provided by restaurants in town.

Before long, successful start-ups will reach the limits of their hometown’s fashion market, and must consider how to expand.

For Evereve, that involved a radical rethink of its brand, starting with the name. Before 2014, the chain was called Hot Mama, a quirky moniker that had helped it stand out in suburban town centres but was limiting its potential audience. The company hired a brand strategist to examine the company, meeting with both consumers and employees of the brand and see how its narrative had evolved over the years.

Expansion requires patience — it can take three years to build a reputation in a new market, Tamte said.

“We know we’re a new brand, a lot of people haven’t heard of us before,” he said. This fall, the chain will enter the New York area with an outpost in the American Dream mall across the Hudson River in East Rutherford, N.J.

For brands just starting to look at expansion, pop-ups, trade-shows and markets in other cities can help gauge consumer responses and feedback.

Looking at digital sales can also help brands see where to go next. Beard found a number of her customers on social media and shopping online were based in Brooklyn.

She said she’s spending more time there, opening pop-ups and meeting customers and wholesalers. With the brand on track to hit $1.7 million in sales this year, she said she’s ready to expand beyond her hometown.

“Austin is a pretty small big town,” she said. “I’ve been trying to take as many meetings and coffees as possible.”