How Selfies, the Sharing Economy and Sugar Daddies Are Boosting Luxury Profits

The rise of selfie culture has turbo-charged desire for luxury goods. Now, cultural shifts are putting these products in the hands of untold millions, giving brands much to smile about.

How Selfies, the Sharing Economy and Sugar Daddies Are Boosting Luxury Profits

The rise of selfie culture has turbo-charged desire for luxury goods. Now, cultural shifts are putting these products in the hands of untold millions, giving brands much to smile about.

GENEVA, Switzerland — As purveyors of perceived exclusivity, luxury goods companies help fulfil the human desire to simultaneously signal belonging and stand out from the crowd. The power of this intrinsic need to both flock and differentiate is fanned by new wealth creation, as newly affluent people aim to communicate their freshly attained social status so much so that, today, emerging market consumers drive the bulk of luxury demand.

This was the case with the economic rise of the US and Japan in the last century and with China’s boom today. With economic development comes asset inflation for the wealthy and rising salaries for the working class, giving them the means to indulge in luxury goods.

Nothing new about that. And yet there is a fresh wave of demand swelling up. The explosive combination of social media and selfie culture has made what used to be private now accessible the world over. And with millions posting their “best lives” online every day for all to see, the human desire to stand out has never been more intense. This has exponentially expanded the number of people looking for ways to distinguish themselves, including through the conspicuous display of luxury goods.

But while everyone now wants to stand out, not everyone has climbed the socio-economic ladder. How does one then afford an Instagram-worthy lifestyle, if one hasn’t quite arrived?

The human desire to stand out has never been more intense.

Here, other shifting currents in society have a part to play. Economically, we have seen the rise of the discounters, for instance in food retail and air travel. This has allowed consumers to save in categories that they don’t care about ­— groceries aren’t likely to feature in Instagram feeds ­— and instead funnel their resources to those that they do. Cue the selfie of being decked out in the latest must-have designer wear while lounging at an upscale spa destination (no mention of the budget airline taken to get there, of course).

The rise of the sharing economy has given yet another boost to the luxury sector. With Uber and its ilk now ubiquitous, consumers are spending less on big-ticket items such as cars. This similarly boosts the discretionary dollars on hand, making luxury goods appear much more affordable than before.

Wider demographic shifts are also playing a role. Couples are getting married later in life, a global phenomenon that is increasingly common as economies mature. And the young are waiting longer before buying their first homes too, continuing to live with their parents in the meantime. Both of these developments increase disposable income today, making bringing luxury goods within greater reach.

Women turned to sugar daddies in the past because of poverty; now, they are increasingly doing so because of vanity.

But what about those who do not have the luxury of “piggybacking” on their parents? Their desire to stand out is no less strong; how will they afford their goods of desire?

Some have done so by fulfilling the desires of others. As a BBC report details, an increasing number of Kenyan women are turning to older, wealthier men to give them a lifestyle they can proudly showcase on social media. The upshot: women turned to sugar daddies in the past because of poverty; now, they are increasingly doing so because of vanity. 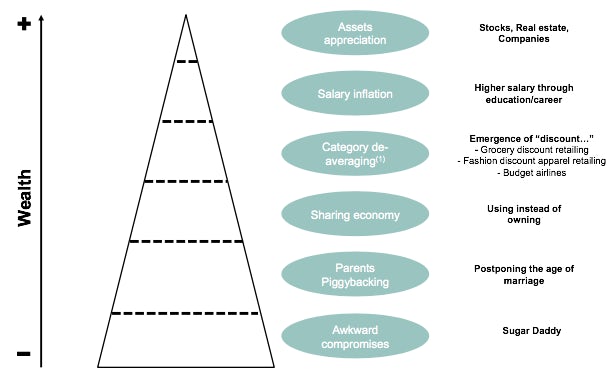 In sum, today’s world is one in which exhibitionism and individualism have become embedded in the global cultural zeitgeist, cemented by social media. Regardless of how one feels about these trends, or of the well-documented surge in income inequality, the implications for investors are clear: the fundamentals for the luxury goods sector have hardly ever been stronger, all the more so when it comes to millennials.

This is manifesting itself in new product categories, opening a high-end market at unprecedented price points for high-margin luxury sneakers, T-shirts and sweatshirts. To be sure, investors have much to celebrate — at least, until the next revolution.