A new style tribe is challenging Dubai's reputation as a shopping hub for old-fashioned luxury bling.

A new style tribe is challenging Dubai's reputation as a shopping hub for old-fashioned luxury bling.

Packs of onlookers, many dressed like Majed, lingered nearby, enquiring about the cost of coveted Adidas and Nike styles. Prices were steep, even by the frothy standards of the secondhand sneaker market. Majed offered a pair of Off-White Air Jordan 1’s at 10,500 dirhams, about $2,900. The shoe originally retailed at $190 when it was released in March, according to StockX, and last sold on the site for $2,250.

Though he was coy about how much money he makes per year, Majed said he expected his booth would take home more than 100,000 dirhams ($27,000) over the weekend. It’d make skipping school the next day to catch up on his studies for the end-of-year exams worth it. 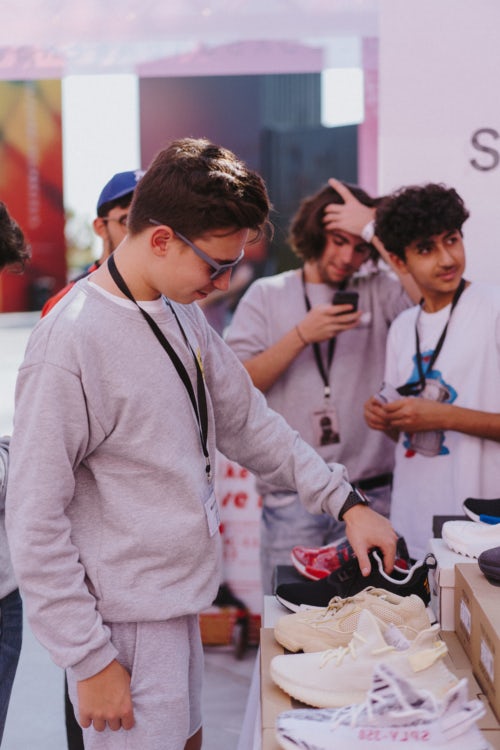 Majed was in the perfect place to command such prices; rare sneakers can be nearly impossible to find in this part of the world. He and his friends were among about a dozen resellers at the heart of Sole DXB, a three-night, two-day streetwear festival that took place last weekend on an open lot overlooking Dubai Creek in the UAE’s largest city.

About 28,000 attendees shopped brands such as Adidas, Puma and even Dior, watched basketball tournaments, took selfies in Instagram-ready installations from Uber and Cadillac, listened to panel conversations with designer Kerby Jean-Raymond and musician Yasiin Bey and watched performances from hip-hop and rap artists including ASAP Rocky, Blood Orange and Nas.

What’s a streetwear festival, the kind typically found in New York and Los Angeles, doing in a city where the heat makes street life largely impossible, and shopping is concentrated in giant indoor super-malls?

The answer is not just about dirhams.

Dubai is a futuristic city that essentially popped up in the desert over the last two decades, turning into a business hub where visitors from around the Middle East flock to spend ample cash on all kinds of goods, from luxury fashion to cars and yachts. Even though foreigners account for about 80 percent of residents, the city still has conservative, religious roots.

But the explosion of social media use in the Middle East and North Africa — from 7 percent of people with internet connection in 2013 to 42 percent in 2017 — means Dubai is no longer years behind when it comes to global trends. And streetwear and sneakers are the predominant force in fashion right now, outpacing the growth of the luxury market last year according to Bain & Co.

It only makes sense, then, that Dubai — which has more than earned its reputation as a playground for the upper echelons of the Middle East — would get on board with Balenciaga trainers and Off-White t-shirts. Retailers have responded: Farfetch linked with luxury distributor Chalhoub Group to better serve the region in March. Nike just opened a new flagship, its largest in the Middle East, in the Dubai Mall.

The next chapter that we are seeing in contemporary culture, in street culture, is in this part of the world.

The region is not without serious challenges. Headwinds include falling oil and gas prices, rising public debt and political instability.

The Dubai shopper is now more price sensitive and less brand loyal than before, said Rania Masri, chief transformation officer at the Chalhoub Group, which oversees the retail operations of luxury brands as Louis Vuitton and Carolina Herrera in the Gulf, as well as stores such as the massive Dubai Mall footwear boutique, Level Shoes, now full of sneakers at every price point.

In Dubai, streetwear was once seen as trashy, said one of Sole DXB’s leaders, Raj Malhotra. “We didn’t want to keep having to get on a plane every time we wanted a slice of that culture,” he said. Sole DXB's co-founders — Hussain Moloobhoy, Joshua Cox and Kris Balarite — started it as a small scale event in 2011, before shifting to the larger festival format in the Dubai Design District in 2014. Now hypebeasts provide an exception to the retail slowdown. “The next chapter that we are seeing in contemporary culture, in street culture, is in this part of the world.” 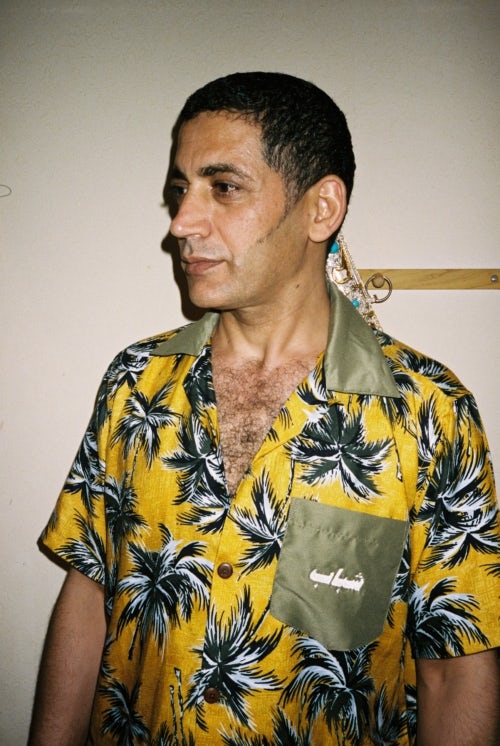 “Some locals don’t accept it. They think that you should just stick to the traditional clothes,” said Mohammed Al Shafiei, a 20-year-old student at Sole DXB. He likes to shop from Grailed or Ebay, and said an interest in fashion is slowly becoming more accepted for men in the Middle East.

“It’s the first time that I’ve seen people dressed to this extent,” said a 30-year-old executive at a Dubai telecommunications company who declined to share his name. He came to Sole DXB in the long white kandura robe, one of a minority of attendees who wore traditional clothing to the event. But he paired it with neon sneakers, also not an uncommon styling choice for men after hours throughout the city. “My father had Nike shoes, my grandfather had Nike shoes," he said.

Sole DXB’s Malhotra said he and his partners want to change negative perceptions about fashion and streetwear in the Middle East through the annual event. It doesn’t matter than Dubai is not a “bastion of street culture,” he said, because the city is a global hub for the Gulf region, India and Africa, with 15.8 million total tourists visiting in 2017.

“This is the complexity of Dubai: it’s an Arabic country, but it’s so international,” said Amirlan Kurakov, who works at Japanese skateboard shop and cafe, Selectshop Frame, founded by Peter Ahn last year. “But in Dubai, it’s still not there yet to talk about actually something signature in terms of authenticity. It’s not even a baby, it’s just a sperm, it’s in the process of developing.”

At Sole DXB, he was part-salesman, part-educator about the brands on offer, such as Sci-Fi Fantasy and Better.

Some are cynical that these signs of change will make a dent in the mind of Dubai’s retail shoppers, who have a reputation for being obsessed with flashy logos and being years behind the trends coming out of the rest of the world.

And some see that mindset applied to the current streetwear moment, too. 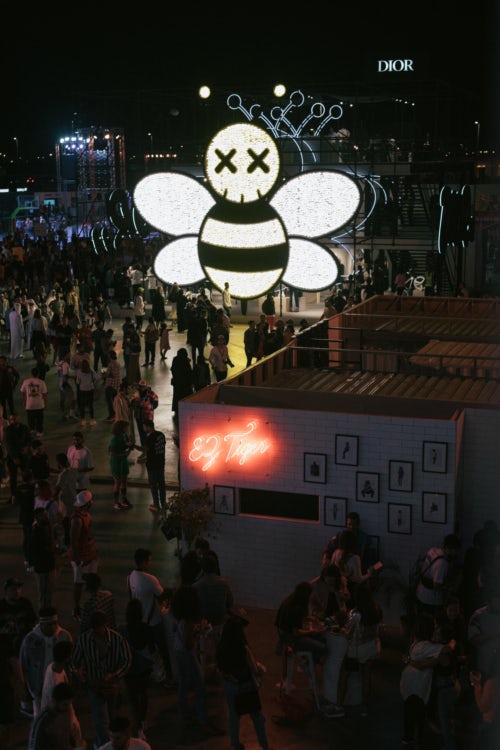 Bobby Chehrazi, the founder of concept store Closet Case in Dubai, selling brands like Rick Owens, Alyx and Ann Demeulemeester, says many young shoppers don’t have their own sense of style. “They are head-to-toe in Off-White,” he said. “They see it because it looks cool today, and tomorrow it’s a different thing.”

That approach is a global movement, however, and one that retailers are capitalising on in the Middle East, too.

Online luxury marketplace Farfetch had one of the largest installations at Sole DXB this year, where it partnered with sneaker consignor Stadium Goods to offer Supreme luggage and limited edition Nike pairs. (The following week, Farfetch announced that it would acquire Stadium Goods.) The marketplace serves the entire Middle East region from its office in Dubai, and the average customer is younger than 30.

“Would a trend start here? Maybe not…that hasn’t happened yet,” said Farfetch’s managing director of Middle East, Edward Sabbagh. “I’m never worried about any trend catching on here, it does that by itself through social media.”

While the US market is saturated with brands, Puma’s global director of global lifestyle and footwear Yassine Saidi said brands “look for new territories." As a result, Sole DXB has become a milestone on Puma’s calendar in a way it wasn’t two years ago, he said.

The last two years have been especially transformative for the festival, which took a break in 2013 to raise money and court brands. It has had success luring major luxury players in a way its larger American counterparts ComplexCon and Hypefest have not. In 2017 and 2018, Dior had set-ups with exclusive releases at the festival (this year, it was Kim Jones’s collaboration with KAWS); last week, Gucci hosted an afterparty, as did Farfetch.

Within the last year or so, you can see there’s more market here.

Co-founder Malhotra says landing brand sponsors, and asking them to release exclusives, has gotten easier as the Sole DXB audience has about doubled between 2016 and 2018. Attendees' spending on site has also grown, from $180,000 in 2015 to $900,000 in 2017. But scaling something that doesn’t feel too sponsored is a challenge.

“One of the hardest things to do in Dubai is create vibe,” said Malhotra. “The entry point is so expensive for everything here.” Keeping Sole DXB free in the beginning was a big part of that, and while tickets now range from 195 dirhams per day to 295 dirhams for the weekend, a portion is still given out for free. Sole DXB is raising money to expand around the festival it wants to keep at its core, with spin-off events focused on music, sport and fashion, as well as in other cities around the work.

Hussain Moloobhoy, another one of Sole DXB’s co-founders, wants the festival to show people “there is a creative class out here,” he said, and break down stereotypes.

It's true, the streetwear moment bubbling in Dubai isn’t only influenced by outsiders. 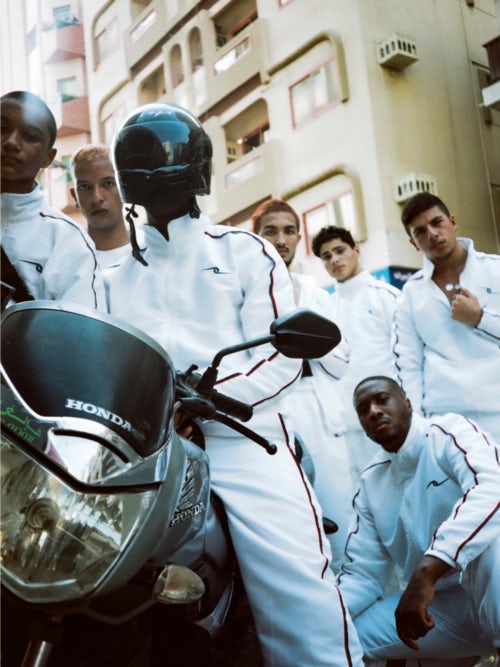 In 2017, five new concept stores opened in Dubai, outside of the main malls and geared largely for men. They offer hard-to-find and special collaborations from Nike and Adidas as well as curated selections of Undercover, Stussy, Stone Island, Alyx, 032c and Places + Faces, just to name a few. The shops Worthy and Concepts can be found in the new outdoor shopping zone City Walk, while General, Frame and Closet Case are located in the same Dubai Design District that hosts Sole DXB — and where, not coincidentally, a skatepark opened at the beginning of the year. Another local shop, Amongst Few, paved the way when it opened in 2015, and is known as a culture leader for sneakerheads.

“Within the last year or so, you can see there’s more market here,” said Cheb Moha, a photographer, stylist and founder of five-year-old streetwear brand Shabab International, which took up shop at a booth at Sole DXB. It was a gathering point for a crowd of cool kids throughout the weekend. (Notably the brand’s logo is in Arabic.) Shabab had a collaboration with Nike, creating custom jerseys, also tied to Nike’s new flagship opening at the Dubai Mall earlier that week.

Moha, who grew up in Libya and Calgary, said the streetwear culture in Dubai isn’t different from the global one. “What changes is maybe here, because there is less access to it, it’s interesting how people get things, — ‘How the hell did you get this?’” he said.

Next door to Shabab at Sole DXB, 21-year-old Algerian designer Wathek Allal launched a new collection of his young apparel brand, Precious Trust. He’s been in Dubai for 5 years and has met a creative community through skateboarding. “Everything that’s here is personal thoughts and ideas,” he said about his brand. “I don’t know if it is streetwear.”

“The customer in Dubai needs a brand like this because it's from here,” said Ahmed Edmekki, one of the designers behind another local brand, 5ivepillars, named after the five pillars of Islam. “It’s Arabic and at the same time, it’s cool.”

It’s the kind of message that was easy to find throughout Sole DXB, despite the big-budget presence of global brands.

Disclosure: Chantal Fernandez travelled to Dubai as a guest of Sole DXB.

Editor's Note: This article was revised on 17 December 2018. An earlier version of this article misstated that Sole DXB paused in 2015 to raise money; that happened in 2013.