In the handbag resale market, a few key elements separate the 'It' bag of the moment and an enduring classic.

In the handbag resale market, a few key elements separate the 'It' bag of the moment and an enduring classic.

NEW YORK, United States — Imagine the frenzied floor of the New York Stock Exchange during Wall Street’s 1980s heyday: traders scrambling to make deals, driving the value of thousands of companies up and down on a minute-by-minute basis. Now imagine that instead of shares, the traders are buying and selling handbags: Hermès Birkins, Chanel 2.55s, and Gucci Marmonts.

This is how Charles Gorra, the founder and chief executive of Rebag, envisions the luxury handbag resale market. An alum of Goldman Sachs and TPG Capital, Gorra argues that the lifespan of a premium bag extends beyond the first sale in stores.

The “grey market,” where gently used luxury items are sold and resold, is losing its stigma with consumers. Rebag, The RealReal and Vestiaire Collective are among the players in a secondary luxury market slated to reach $6 billion in global sales in 2018, according to Bain & Co. Many shoppers have no qualms buying consignment for a good deal, and a growing number turn to resale sites to collect items they hope will appreciate in value.

There’s just one problem with treating handbags like fine art, wine or stocks: where those assets often appreciate in the long run, the vast majority of handbags do the opposite. For every well-kept Birkin that goes up in value over the years, there’s dozens of Proenza Schouler PS1 satchels. The style found its way onto many a fashion editor's shoulder in 2008 but today retains only 30 percent of its original $1,800 price tag on the secondary market.

A handbag’s value might decline faster or slower depending on its maker’s continued relevance, general demand for accessories and a dash of luck. Most handbags lose at least 60 percent of their value over time, though exceptions like the Chanel 2.55 depreciate by 20 percent or less. Even legendary “It” bags fall victim to the trend, including the Fendi Baguette, Chloé Paddington and Celine Trapeze. All three sell for a fraction of their retail price on sites like Rebag and The RealReal.

But now, with access to these resale sites, consumers can be more strategic about making the big purchase.

Though handbag enthusiast Angelica Reza, 35, has never bought second-hand, she considers the resale power of each handbag before taking the plunge. Reza owns and has purchased multiple Chanel bags. “I always think about what could depreciate, and Chanel and Hermès are the two that don’t. I want to know that I have something that could resell quickly and for a good price,” she said.

Celebrity status will definitely influence the rise of an It bag, but it should appear as a natural evolution.

The term “It bag” emerged in the late 1990s, pegged to high-end handbags that were so popular, they defined a whole season. Historically, It bags often featured a logo on a simple but recognisable design, sold at luxury prices. Today, they vary in aesthetic complexity and price points, as more brands enter the handbag market, including newer direct-to-consumer brands like Staud, Mansur Gavriel and Cult Gaia. Case in point: the Lyst Index, which tracks sales, online searches and social media mentions of 12,000 designer and retailers, says the buzziest bags on the market today are the Dior Saddle ($2,350 to $8,500) and Staud’s Shirley tote ($195 to $295).

In the age of Instagram, consumers also want a bigger selection in their personal wardrobes to avoid repetition in their posts, which has led to the greater desire for more affordable options as well as a robust resale market.

“I do feel like there’s a shift happening from these bags, where it [used to be] that It bag trend where people were buying a bag for an entire year or season, whereas now the fashion customer is buying three bags,” said Sarah Staundinger, co-founder of the contemporary brand Staud.

And when women are ready to move on to the next It bag, the resale market is waiting for them.

According to Gorra, designer bags go through four phases.

First, the release. In the month after a product’s debut, it’s highly unlikely to hit the resale market. Limited-edition items follow a different formula, with professional buyers snapping up supplies to immediately resell for two or three times. The red box logo Keepall 45 from last year’s Louis Vuitton X Supreme collection retailed at $3,650 but is now sold for more than $12,000 online.

Celebrity status is one of the key ingredients in creating an instant It bag. Hedi Slimane’s new handbag for Celine, for instance, is not yet available for purchase but was recently spotted on the arms of Lady Gaga and Angelina Jolie. The Dior Saddle became a sensation this summer when dozens of Instagram bloggers posted photos of the bag within days.

Brands lacking Dior’s marketing budget or Slimane’s high-profile friends can achieve a smaller-scale version of the same effect by sending bags to influencers in the hopes they’ll wear them in Instagram posts. That approach carries its own risks because it can come across as inauthentic.

“I think it’s more organic when Rihanna is seen sporting a particular Chanel bag while she’s being under-the-radar,” said Monika Arora, the founder of popular purse blog Pursebop. “Celebrity status will definitely influence the rise of an It bag, but it should appear as a natural evolution.”

Behno, a contemporary brand that emphasises its sustainable supply chain, has tried the influencers tactic in the past, but it never translated into sales, according to founder Shivam Punjya.

“It needs to be old-school word-of-mouth,” he said. “We found that the sales associates at Bloomingdale’s or Bergdorf end up becoming ambassadors for a brand.”

In phase two, the handbag reaches the masses.

Between one and six months after a bag’s release, it tends to hit the apex of its hype. At this point, it’s been exposed thoroughly to consumers, and some early buyers may start to sell their purchases on resale sites, sometimes for more than what they paid if the bag is still in demand. Gorra points to the Chanel Mini flap bag, released seasonally so they are harder come by, which sold on Rebag for $200 to $800 above retail.

Functional bags perform well during this period because consumers use them in their day-to-day life.

Staud’s Shirley features a pouch inside a clear plastic tote, which allows consumers to either show off the contents of their bag or use the opaque pouch.

“The design lends itself to imagery. People want to post pictures of it because you can hold it against a background and see the background through the bag,” Staudinger said. “And influencers were showing off their fashion week invites through the bag, without having to hold it up in their hands.”

The PS1 was another example of a bag designed based on “an opening in the market, where there wasn’t a comfortable carry-all bag that you can put your laptop in,” said Rati Levesque, chief merchant officer of online consignment retailer TheRealReal. 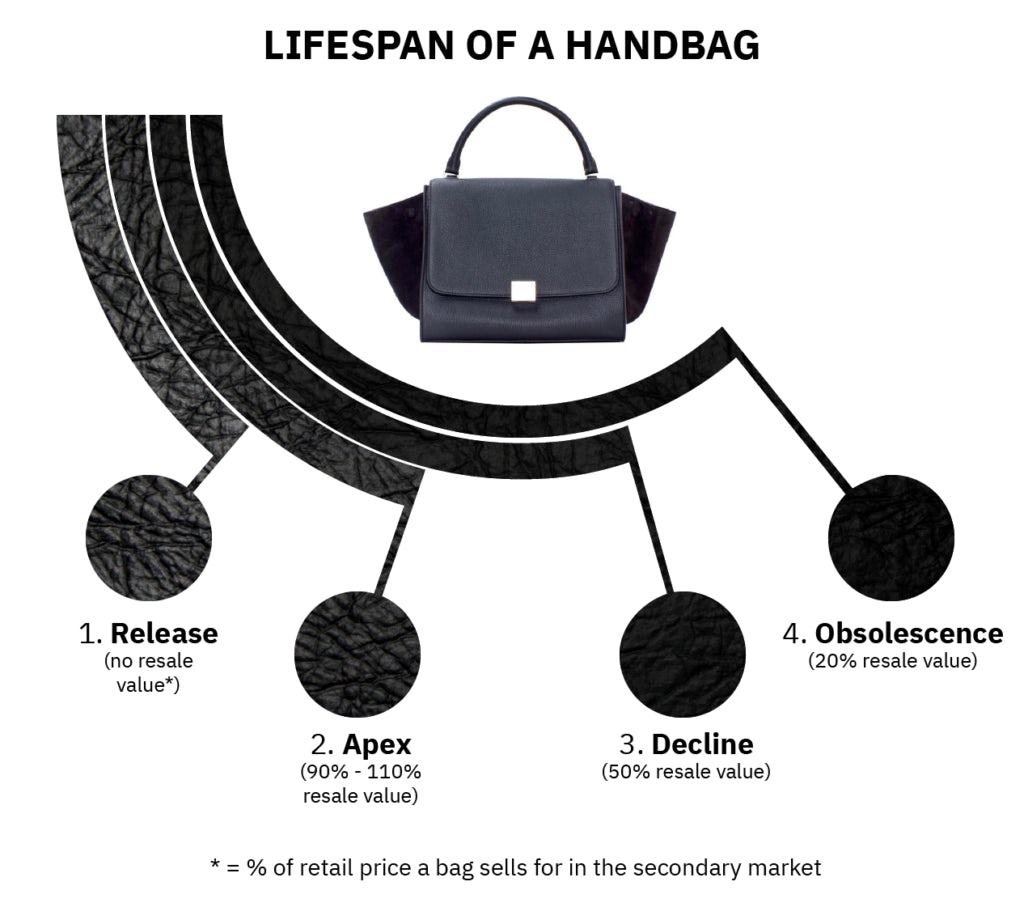 A bag’s value begins its decline in the third phase, between six months to a year after release. Large quantities hit the resale market during this time, and prices fall anywhere from 40 to 60 percent below retail. Dior’s 2016 Diorever Satchel was the perfect example: “Initially, it was hard to find, it was on the arm of every celebrity and was even being compared to the Birkin at a much better price point,” Gorra said. “Eight months later, the bags started to come in.”

The Celine Trapeze, which came out in 2011, held up to 90 percent of its retail price for three years, according to The RealReal’s Levesque. But it began to flood the secondary market in 2015, with supply growing 80 percent year-over-year. Today, the bag’s resale value hovers around $1,100, versus $2,100 in 2012.

In some cases, brands can hold off this phase by artificially controlling inventory, such as by regularly tweaking a bag’s look or releasing them in limited quantities. The brands most successful at retaining value — Chanel and Hermès — also use extravagant price tags to preserve their air of exclusivity.

Limited-edition bags perform exceptionally well on the resale market, according to Caitlin Donovan, the head of sale for Christie’s handbags and accessories. The Louis Vuitton X Supreme collaboration is a prime example. But any kind of scarcity will undoubtedly drive up prices.

According to data from The RealReal, Hermès’ Birkin, Kelly and Constance bags currently sell for up to 140 percent of their original retail price.

Even among Birkins, popularity depends on availability. “There was a while when everyone was trying to get their hands on the 25 [the smallest size for a Birkin] and then it wasn’t hot anymore when it became available,” Arora said.

The same principle applies once an item hits the secondary market: the more sellers, the lower the price.

“When we see saturation or an influx of products coming in, like we saw with the Celine trapeze bags, prices do decrease,” Levesque said.

For all but an elite few bags, a nosedive is inevitable. Typically, about a year after release, demand plummets and huge numbers of bags hit the resale market, fetching prices as low as 20 percent of retail.

With It bags, the nosedive typically comes later, sometimes years after their peak. The Chloé Paddington, released 2004, once retailed for about $1,300. On TheRealReal now they sell for under $300. And brands like Saint Laurent, Prada, Fendi and Bottega Veneta have seen handbag styles struggle in recent years to retain more than half of their retail value on resale sites.

The ability of a handbag to remain in the second or third phase is the testament to its status as an It bag. The Gucci Dionysus, for instance, introduced in 2015, has lived in phase three for years now. According to The RealReal, the style has retained on average 70 percent of its $1,800 retail value.

But the difference between an It bag and an everlasting classic is the jump from phase three to phase four, and difficult for a brand to engineer, Gorra said.

“It never happens on purpose,” he said.