Veja, Rothy's and Allbirds are three sustainable brands that have cracked the formula for creating ethical shoes that are also money spinners.

Veja, Rothy's and Allbirds are three sustainable brands that have cracked the formula for creating ethical shoes that are also money spinners.

PARIS, FRANCE — In fashion industry circles, Veja has a reputation as the “green” luxury sneaker, made with sustainable materials in a transparent supply chain. But when sales took off a few years ago, thanks to better distribution and some prominent admirers, most of the new customers didn’t have a clue about how the shoes were made. And co-founder Sébastien Kopp says he’s just fine with that.

“There is only 15 percent that knows where Veja comes from,” said Kopp, who co-founded the brand with François-Ghislain Morillion in 2004. “The other people buying Veja, they don’t know.”

Kopp and Morillion said they were content to be a niche label, in part because the raw materials they used were hard to find in large quantities. But about three years ago, growth accelerated, with sales soaring 70 percent to €30 million ($34 million) in 2018. They’ve now sold over three million pairs of Vejas, with new stockists like Net-a-Porter and Harvey Nichols reporting strong turnover since adding the brand last year.

To get broad appeal, you’ve got to appeal at a higher level. If you don’t look good, you’ve got nothing.

Veja is not the only sustainable shoe brand making waves. Allbirds and Rothy’s, two younger San Francisco-based brands, have created products that have been instant commercial hits. Rothy’s, which was founded in 2016 and is currently only available in the US and China, did $140 million in sales last year, while Allbirds, also launched in 2016, has reportedly sold over $200 million of shoes over the past two years, according to The Wall Street Journal.

These three brands have cracked the formula for creating ethical shoes that are also money spinners: sustainability isn’t the main selling point; it’s the cherry on top. Sustainable fashion has to “work” by first delivering on style or comfort, and at a price point that’s competitive with rival brands that aren’t experimenting with recycled plastic or environmentally friendly wool. 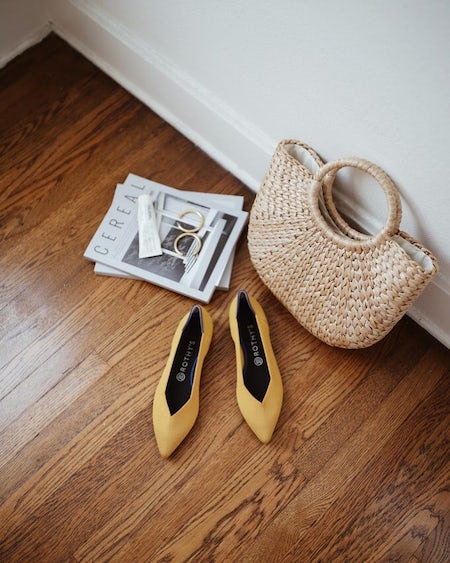 “You always hear this statistic that millennials want to vote with their dollar and that they want brands to align with what their values are. And that is not the case,” said BPCM co-founder Carrie Ellen Phillips, who leads the agency's new sustainability division. “They will not sacrifice the look or the quality. The style is the most important thing for them. And quality tends to be secondary.”

Some brands even find the green label can lead to the assumption a product is more expensive, yet less durable, among certain consumers, who have been burned by flimsy recycled paper towels and other sustainable but shoddy products, said Rothy’s co-founder Roth Martin.

Rothy’s’ woven ballet flats and sneakers are made from recycled plastic water bottles, which are 3D-knitted to minimise waste. But the brand’s website also plays up the $145 shoes’ other traits, including the fact that they are machine washable. Facebook ads tout the sneaker-meets-flats style as a “wardrobe game changer,” without a mention of plastics or sustainability.

“To get broad appeal, you’ve got to appeal at a higher level,” said Martin.“Only a small set will [buy shoes because they’re sustainable]. If you don’t look good, you’ve got nothing.”

Allbirds pitches its sneakers as “the world's most comfortable shoes.” The brand’s signature shoe is the “Wool Runner,” made from merino wool, and has become something of a uniform for Silicon Valley executives. A lighter-weight style is made from sustainably grown eucalyptus pulp. The brand has raised $75 million to date, with an October funding round valuing the company at $1.4 billion, according to The Wall Street Journal.

Just nine months after the brand launched in March 2016, it became B Corporation certified, a status awarded to businesses that meet the highest social and environmental standards. But in the early days, its sustainable ethos took a back seat when it came to the marketing strategy, in part, because “it actually got in the way of people evaluating our product objectively,” said co-founder Tim Brown. They focused instead on the quality of the shoes and their unique materials. 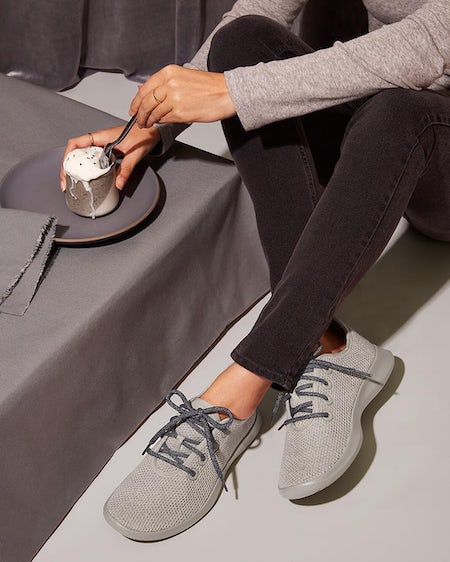 Still, for Veja, Rothy’s and Allbirds, sustainability was built in from the beginning, even if it wasn’t always featured in the marketing. Founders at all three brands said they spent years developing products, only bringing them to market when they were happy with the sourcing of the materials and had lined up ethical manufacturers — or, in the case of Rothy’s, set up its own factory.

Each also sells a limited number of styles. That makes it easier to maintain the focus on improving manufacturing techniques and materials, and rolling out new innovations across the product line.

But they also recognise that when it comes to sneakers, “It” status is ultimately what appeals to buyers. Veja has 1,800 stockists globally, choosing retailers like MatchesFashion and Dover Street Market that will burnish the brand’s image.

“You want the shoes to be well introduced, well presented in the store, well cared about,” said Kopp.

Elizabeth Von Der Goltz, Net-a-Porter’s global buying director, said she loved Veja’s sustainability credentials, but what was more compelling was a “fashion forward” design that was both practical and comfortable.

“It’s a cool, good looking sneaker at an approachable price point,” she said. “When you combine sustainability with good strong aesthetics it’s the perfect combination.”

Allbirds and Rothy’s follow a direct-to-consumer model, which allows them to sell at a lower price point and offer services such as free shipping and returns. Veja keeps costs down by mainly relying on wholesalers and social media, instead of advertising, to get the word out.

When you combine sustainability with good strong aesthetics it’s the perfect combination.

For Veja, transparency is the cornerstone of the business. The company publishes information relating to all aspects of sourcing, production, manufacturing and the supply chain on its website. But Kopp insists that the brand won’t start preaching to its fans.

While sustainability may not be the main driving force behind the success of these brands, it’s still worth talking about it to consumers. Shoppers might not always put their money where their mouth is, but Allbirds, Rothy’s and Veja have found that customers are starting to ask more questions about where products came from, engaging more with the sustainable stories behind the brand.

“If you can appeal on both [good looks and sustainability] then you’ve got something that is quite compelling. Then you get this viral word of mouth thing happening,” said Martin.

On Instagram, the number of people talking about Rothy’s grew 314 percent between 2017 and 2018, according to Tribe Dynamics, a marketing technology company. Earned media value (EMV), a measure that quantifies the dollar-value of digital content, grew 716 percent, hitting $3.9 million in 2018, said the firm. Allbirds’ EMV was up 276 percent over the same period, hitting $5.7 million.

Perhaps the fact that none of the founders behind Allbirds, Rothy’s or Veja came from a fashion or footwear background helped give them an advantage when it came to knowing what regular people want out of their shoes. Veja’s Kopp and Morillion were in banking. Rothy’s’ Martin owned an art gallery, his co-founder Stephen Hawthornthwaite worked in finance. Allbirds’ Brown was a footballer, while his co-founder Joey Zwillinger was in bio-tech.

“Oftentimes, Joey and I hadn’t known the rules that we were breaking,” said Brown. “And, it’s helped us.”

How to Build a Sustainable Brand Like Patagonia on a Budget

Millennials Say They Care About Sustainability. So, Why Don't They Shop This Way?

How Big Retailers Are Selling Sustainability